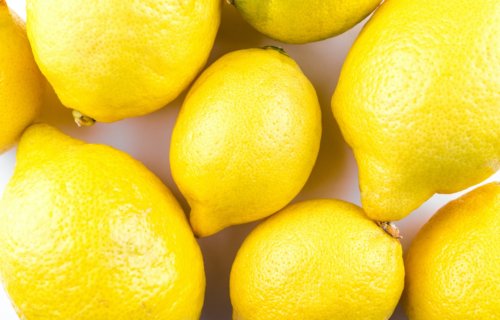 While many people believe “you are what you eat,” scientists in the United Kingdom say what you smell can also determine how you feel. Their study finds sniffing lemons can actually help people feel thinner. On the other hand, the scent of vanilla can make you feel thicker and heavier.

Researchers from the University of Sussex believe the sounds of light footsteps and certain smells help promote a better body image and a healthier lifestyle. Previously researchers have shown that visual stimulation and sense of touch can change a person’s perception of their own body weight.

Now, researchers find a person’s sense of smell and sound can also change how we feel about our self-image, which could help improve healthy behaviors.

During experiments, sounds of stiletto heels made participants walk faster than if they heard lower pitch sounds, like that of heavier boots. To see if sounds could change body image perceptions, researchers used headphones to alter in real time how subjects heard their own footsteps.

Heavier bodies produced lower frequency footsteps than lighter ones, so the researchers thought that changing the sound could alter how a person perceives their own weight. The results reveal the scent of lemon could make participants feel lighter, with vanilla making them feel heavier.

What you hear determines how you walk?

The team enhanced these sensations by combining them with high-pitched sounds and low-pitched sounds of the participants’ footsteps. When the researchers played higher-pitch footsteps that sounded like stilettos, the test subjects walked faster compared with when they heard lower pitch sounds.

The researchers also tested how smells could change perceived body image. The study finds exposure to lemon-scented essential oils in combination with high-pitched sounds during the experiments made participants perceive themselves to be lighter.

These first results in sound-scent body image association are still being studied, but already the power of audio on body image has promising applications, the British team says. Since negative body image can lead to increased risks for eating disorders, isolation, and emotional distress, finding ways to manipulate self-image could enhance health through promoting better self-image.

The researchers believe that multisensory stimuli – sound and smell in particular – should play a greater role in treating body image diseases, like eating disorders such as bulimia and anorexia.

Experts believe they can fit these odors into wearable devices or “interactive clothes” to boost self-esteem in everyday life.

“Our brain holds several mental models of one’s own body appearance which are necessary for successful interactions with the environment,” lead researcher Giada Brianza says in a university release.

“These body perceptions are continuously updated in response to sensory inputs received from outside and inside the body. Our study shows how the sense of smell can influence the image we have in our mind of our body and on the feelings and emotions towards it. Being able to positively influence this perception through technology could lead to novel and more effective therapies for people with body perception disorders or the development of interactive clothes and wearable technology that could use scent to enhance people’s self-confidence and recalibrate distorted feelings of body weight,” the PhD student in the Sussex Computer-Human Interaction (SCHI) Lab adds.

Perception is a major part of reality

In the follow-up study, participants stood on a wooden board, wearing headphones, a pair of motion-capture sensors, and a shoe-based device which enhanced the pitch of their own footsteps. Researchers told the group to walk on the spot while they released olfactory stimuli for the volunteers to smell. Study authors then asked participants to adjust the size of a 3D avatar using a body visualization tool according to their perception of themselves. They also answered a questionnaire about perceived speed, body feelings, and emotions.

“This could help account for the different body image perceptions when exposed to a range of nasal stimuli. One of the interesting findings from the research is that sound appears to have a stronger effect on unconscious behavior whilst scent has a stronger effect on conscious behavior. Further studies need to be carried out in order to better understand the potential around sensory and multisensory stimuli on BIP.”

The findings was be presented at the 179th Meeting of the Acoustical Society of America in 2019.

Source: Sniffing lemons can make you feel thinner, while the scent of vanilla does the opposite, study shows