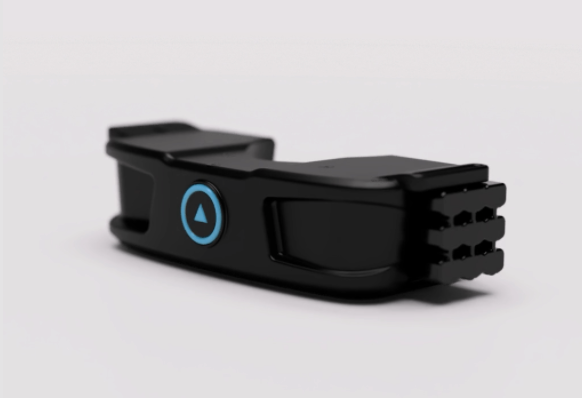 Semi-recently, I wrote an article about Smell-o-vision in books and movies. And the end result of that article was I was contacted by two different companies that specialize in the creation of some kind of smell-o-vision. No longer a novelty, it’s a real, viable technology that you are going to start seeing more and more of. While we can all guess the use case of ‘entertainment’ I think you’ll be surprised that smell-o-vision is also currently being developed for use in training and therapy.

When it comes to training and therapy, there are companies developing virtual reality (VR) programs to either teach people something new, or provide therapy to overcome a trauma. But what you might not have known is that scent is an important factor in both training and therapy. OVR Technology — which stands for Olfactory Virtual Reality Technology — knows how important scent is to a truly immersive VR experience and has developed a headset for it, or should I say noseset?

The OVR Technology device, called the ION, adds on to an Oculus over the nose. This lightweight, wireless device precisely emits scent particles to the user in coordination with virtual reality technology designed to deepen the immersive experience. I was lucky enough to get to try a demo of this product with guidance from Jesse Stein, OVR Technology’s VP of Marketing. In the demo, I could pick a flower and smell it. When I brought the flower, a rose, to my nose, it smelled like roses. And when I brought the flower’s roots to my nose, I could smell dirt. For those that haven’t tried the Oculus before — it provides a Johnny Mnemonic-like interface where you can move your hands in the air using controllers. Using your hands with the controllers you can move through menus, pick up and set down objects, and more.

During the demo, a ghostly virtual reality lawn mower drove by and the grass cuttings that appeared to hit my face smelled of fresh grass. In another scenario, I was able to create a pizza, smell all the toppings and then smell the pizza cooking. Their last demo was of a campfire setting which smelled of real smoke and smores. A great thing about OVR Technology’s smell-o-vision is how it is personalized to your own actions. When you move the controls using the Oculus, it can sense how close or far away you are, and decide when to release a scent.

I was very impressed with how precise OVR’s ION device was. The company calls it the most precise device of its kind, and I believe it. Scents were released immediately whenever I tried sniffing an object in the VR world they created. Something really fascinating, is they have a scent library. You can order a device containing a variety of existing scents, and they have the ability to capture new scents and create custom ones for you. Their technology is already in use for two arenas I mentioned previously — training and therapy.

For training, the ION device is used with first responders like fire fighters. It can be used to mimic different odors a fire fighter needs to be able to recognize when responding to a dangerous situation. The obvious example is smoke, but there are many less obvious examples such as different chemicals or gases. Training with a headset can help them learn to recognize different odors and make better decisions in a real world situation.

For therapy, OVR Technology is used in over 60 hospitals to help combat veterans recover from post-traumatic stress (PTS). Called exposure therapy, it’s where a patient is guided by a therapist through a retelling of their experiences, in a safe, controlled setting. The current applications offered by OVR Technology are a set of relatable scenarios the patients may have encountered while serving. They are able to re-experience the scenario, made more real by the use of OVR Technology’s ION device. So far the therapy has helped many patients reduce PTS symptoms and OVR Technology is continuing to build out their catalog of scents and scenarios.

This is one of the most incredible modern-day uses for virtual reality I’ve seen.

A lighter use of smell-o-vision is entertainment. Raul Porcar, CEO of Olorama has been working to bring smell-o-vision to the masses for years. He said he first got the idea when he saw a movie ten years ago. He was watching a popular TV show in Spain (“El Hormiguero”), and in one of the sections of the show where they were doing experiments, something exploded and the presenter said: “Wow! How it smells! I wish you could smell it at home.”

A lightbulb went off. Porcar wondered why you couldn’t smell anything in films, and he decided to try to change this. He assembled a team and they worked to create a wide variety of smell synthesizers. Each device is intelligent, and can provide up to 10 different smells. For events that require additional scents, the devices can be combined to provide up to 20 or 30 different smells.

It is patented equipment that can be controlled by software. Each unit covers an approximate area of 15 square meters, but the units can always be replicated to cover a larger space (as is done in cinemas, where one unit is installed for every 10 spectators).

The smells used in Olorama are ultra-realistic, and highly volatile, so it is possible to change the smell (on average) every 30 seconds. However, Olorama usually recommends no more than 50 smell emissions in a film since this could become too much for the audience — there’s only so much somebody wants to smell during one movie!

Olorama has provided scents for a number of films, I was really surprised by the incredible range of films they have done. Porcar only listed the company’s favorites for me:

What’s most incredible, is the experience is available to you in the comfort of your own home! They offer devices for movie theaters, but you can also buy a device with 12 aromas for films on your computer. Here’s one of their ads:

This seems like a really fun way to experience movies in a new way. I’m sure as the technology evolves more, we’ll see it in more movie theaters.

The one thing no one has figured out yet for these types of products it seems, is a base kit for creating all the smells. Scents are not mixed in devices, instead a device (for either company) comes with a scent pre-installed as one of the selections. Amazing, and I’m sure it will make virtual reality more entertaining, as well as better for training or therapy. Imagine how scent could be customized to remind a therapy goer of calming scents from their childhood, or even generically provide something like lavender!

I look forward to seeing what else these companies come up with, and I’m excited to get to share these advancements in Smell-o-Vision with you as part of ‘Is it Possible?’

Special thanks to Jesse Stein of Olfactory Virtual Reality Technology for an in-home demo of their product and thanks to Raul Porcar for sharing his company’s product information!

You can learn more about these companies on their websites:

Source: Smell-o-Vision is Real!. Semi-recently, I wrote an article about… | by Erikka Innes | From the Desk of the Nerd Legion | Apr, 2021 | Medium