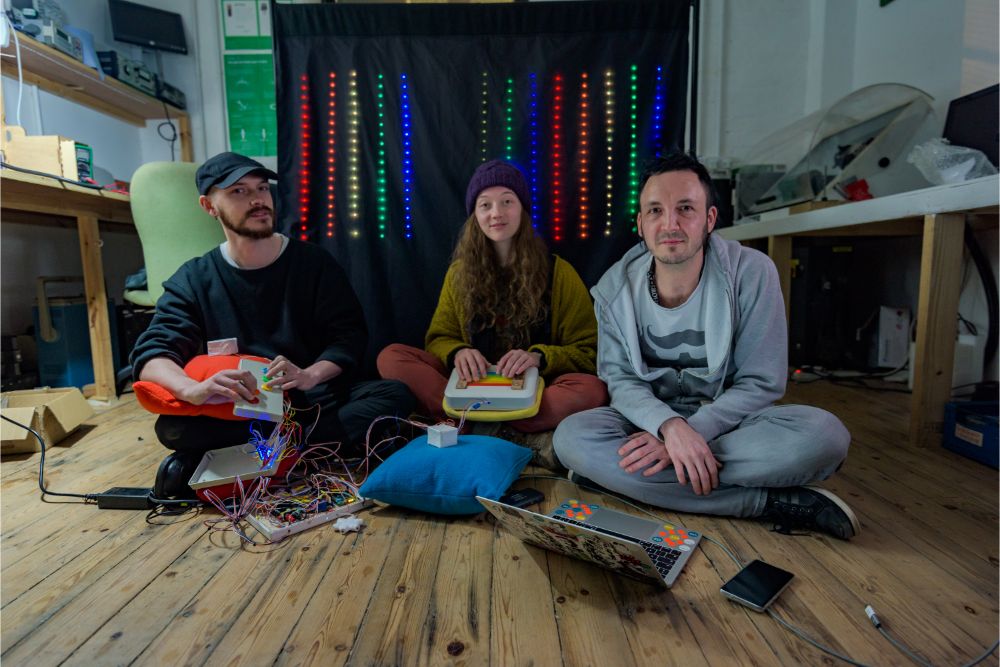 “When you’re born, the first thing you do is make music… Lalalalala!” laughs Jenny, one of the masterminds behind the Silent Orchestra. We’re sitting in a Hackspace workshop, listening to the clatter of metal poles from the installation being built up around us. “With dementia, music is the last thing to go.”

You might have seen the viral video clip taken from Alive Inside, the U.S documentary profiling dementia patient Henry Dryer. We see Henry dramatically transform from inertia after he listens to his favourite music; he suddenly sings, moves his body, and eventually has a full conversation with an interviewer. Music is no doubt embedded in all of us.

But what if your ears fail you? The ORCHARD Study, funded by the Institute of Mental Health, found that care home staff and dementia patients are often unable to communicate effectively when language barriers and hearing loss are involved.

“It must be so hard when there’s that disparity,” says Jenny. “Hopefully this tool can help aid communal communication, or provide experiences where people can enjoy each other’s company rather than being isolated.”

Artist Jenny ‘Hibword’ Hibberd, music tutor James ‘Jamie’ Sykes and programmer Andrew ‘Johnny’ Johnston, have made three electronic instruments. Inspired by the xylophone, harp and clarinet, their buttons and strings trigger LED lights and vibrating cushions in a multi-sensory installation, created for City Arts and the Institute of Mental Health.

“Making the instruments was far more complicated than we could have possibly imagined,” says Jamie. “There was so much problem solving, so many little details like sewing the LEDs to the curtain, drilling through the materials. And that’s before you’ve got any of the electronics involved.”

Jamie looks over to Johnny, “How much soldering was done that night?”

“What? The all-nighter?” smiles Johnny, who deals with the programming and “circuit boardery”.

“I’ve been to some dark places in my head,” he laughs. “Over one weekend, I definitely soldered the best part of a thousand bits. I’ve got the technique down now, though!”

Johnny, who has a Masters in Digital Arts, explains that the ‘harp’ string picks up on the electricity in your finger and changes the resistance in the wire, which is connected to an Arduino board. “In this case, it triggers LEDs,” says Johnny. “But it can trigger audio, video, anything you want, really.”

The trio showcased their in-progress Silent Orchestra at the University of Nottingham’s 2019 Music Care Conference in November. “People there were saying it would be great for people with special educational needs too,” says Jamie.

Jamie and Jenny have worked on community outreach projects together in the past, mainly focusing on developing music and writing with young people and vulnerable groups. Jenny also worked alongside Johnny to develop The Lace Piano which was knocking around in Broadmarsh last year, for the UK Young Artists festival. The three musicians have known each other for years, and this is the first time they’ve all worked on a project together.

“Originally we were talking about music being a communicative thing,” says Jenny. “I remembered a conversation with my friend about his project in Tanzania where they built musical parks. They made instruments out of milk bottle caps, tin lids, all sorts. We really wanted to recreate that in a care home, but knew it would be way too loud.” Jenny’s eyes widen. “Then we were like ‘It can be silent! And it can be an orchestra!’ The idea flooded for this multi-sensory music tool.”

I find myself sitting on the floor in Hackspace, gawking at the curtain lighting up every time I brush the strings of the ‘harp’. There’s something incredibly satisfying about it. “We chose the colours on the LEDs to correspond with the keys and strings on the instruments,” says Johnny. “When you touch a blue, you see a blue, which will trigger some connectivity in the brain.”

“Me and Johnny created all the sounds three octaves apart and they’re all on the pentatonic scale,” says Jamie. “All of them are made to be very soothing, none very abrasive, so when you do play them together it creates a harmony.” The music can be listened to through headphones, hence the ‘Silent.’

“The cushions will vibrate when a note is played too. It’s something tactile and comforting to hold,” says Jenny.

The crew were inspired by the concept of synesthesia – the neurological condition that allows people to receive a sensory experience through more than one cognitive pathway. “One of my friends says my name is reddish brown, and another friend said that I have a purple aura. I find it fascinating,” says Jenny. “Since building The Lace Piano and thinking about how the touch of something can trigger a sound, it’s spurred on more ideas about how we listen to and touch things. It’s all about making music more accessible.”

In the initial research period, Jenny and Jamie spent time at Skylarks Care Home to see how the project might best benefit the people living there. “We learned a lot,” says Jamie. “We’ve worked in dementia care before, but this was a bit of an eye opener for us, to find out how the places work and to see the severity of some patients’ conditions.”

“We noticed a lot of very bright colours in the care home,” says Jenny. “One of the staff members said that red and blue are the last colours to go, and that bright colours are really helpful. One of the participants tried to play a ukulele and just couldn’t gauge how close his hands were to the instrument because of the big, black hole in the middle, so he was really confused. We knew we needed the instruments to be white and very colourful, so there’d be no risk of that.

“We wanted everything to be hygienic too, so you can take the pillowcases off to wash them, the curtain can be washed. It meant a whole lot of extra processes. It’s all the small tasks that take the longest.”

Now the Silent Orchestra is at its final stage, the trio plan to revisit Skylarks, where the installation will live to benefit patients and staff for the foreseeable. Before all the equipment is packed down, Jenny, Jamie and Johnny are keen to big up Hackspace and thank all its members for their support.

“People have been so helpful,” says Jamie.

The instruments appear simple but it’s clear that an incredible amount of complicated, hard graft has gone into making them, and their potential to connect people is huge. As I have a final play on the ‘harp’, I think about the string picking up the electricity from my fingertip, travelling through the wire and triggering the light.

Jamie looks on. “How gently you can touch it, and see it work, is really beautiful.”