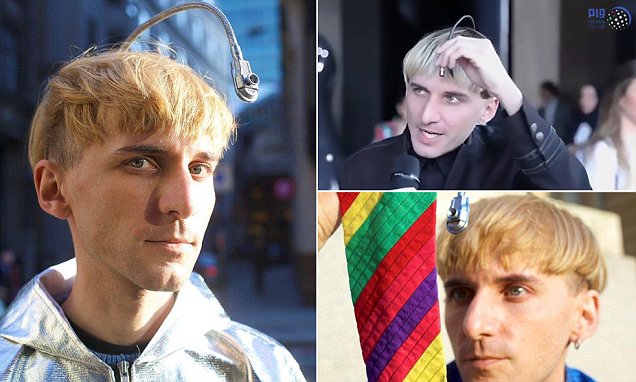 A British-born man who has an antenna implanted in his skull who has been dubbed the ‘world’s first cyborg’ says that there are many more to come.

The device, which the self-declared ‘cyborg artist’ says lets him hear colours, is featured in his passport photo.

He believes that this means the UK government accepts that the device is a part of him and therefore recognises him as a cyborg.

Neil Harbisson spoke to journalists at the World Government Summit in Dubai, held in the north-eastern United Arab Emirates capital city this week.

He had the antenna implanted in 2004, which allowed him to perceive colours for the first time.

He previously suffered from achromatopsia, a condition that only let him see in black and white.

The sensor that dangles over the top of his head translates light waves into vibrations that his brain has learned to decode.

This is similar to the naturally occurring, but extremely rare, perceptual phenomenon synaesthesia, which causes people to experience different senses at the same time.

Mr Harbisson warned that governments needed to accept that there will soon be more people with technological rather than organic body parts.

Mr Harbisson, who was raised in Spain, says the implant allows him to extend his perception of reality beyond the visual spectrum.

He says that he can sense infrared and ultraviolet wavelengths.

The ‘cyborg’ also claims to have an internet connection in his head that allows him to receive colours from other parts of the world and connect to satellites to sense colours from space.

The World Government Summit, held annually in Dubai, is a forum for government leaders to discuss innovation, technology and futurism.

Speaking at the summit, Mr Harbisson added: ‘I came here to talk about how there will be more humans considering themselves to be cybernetic or to be cyborgs, how we will see people with organic and cybernetic body parts in the future and how governments should slowly accept these changes, that some of their citizens will also be part technology and part human.’

Mr Harbisson is a co-founder of the Cyborg Society and the Transpecies Society, which aim to represent people who identify as non-human, though it is not known how many members it has.