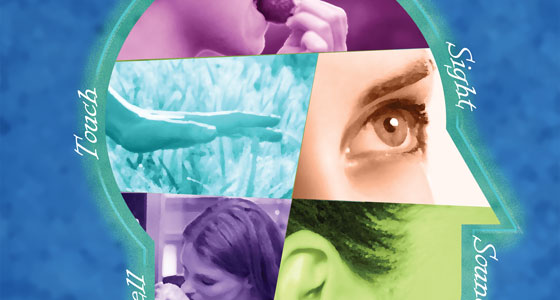 Reduced-sugar foods and beverages can be made sweeter with smell, sight, sound, and touch.

How can you remove sugar from a product formulation, maintain a clean label, and still make foods and beverages taste sweet? By applying contemporary neuroscience, plant-based ingredient technologies, and the concept of crossmodal correspondence.

Let’s start by defining or rather redefining “flavor.” Flavor is not just the five primary tastes of salty, sour, sweet, bitter, and umami in the mouth. Some experts believe that flavor is more than 80% smell or aroma in the nose. In addition, there is touch or oral somatosensation, which includes pressure, vibration, pain, and temperature.

Professor Barry Smith, University of London, Institute of Philosophy, has suggested there could be up to 30 human senses (Warburton 2016). Professor Terry Acree, Cornell University, Dept. of Food Science, a few years ago talked about visual cues and “seeing the flavor” (American Chemical Society 2013). Professor Charles Spence, Oxford University, Experimental Psychology, said that sound is the forgotten flavor sense (Spence 2015). In human perception of food flavors, we are really talking about the integration of all five senses—taste, smell, sight, sound, and touch. Each sense is called a modality.

Next, let’s focus on sweetness in the taste modality. Different sweeteners bind to different locations on the only primary sweet taste receptor, which has two proteins T1R2 and T1R3 (Masuda et al. 2012). Binding leads to a receptor protein conformational change, which triggers sweetness detection and perception (Nango et al. 2016). Smaller sweeteners like sucrose and glucose bind to the Venus Flytrap Domain above the tissue and bigger ones like thaumatin bind deeper down into the tissue in the 7 Trans Membrane Domain. Stevia extract was reportedly bound to the Venus Flytrap Domain on both T1R2 and T1R3 (Sharma and Jaitak 2015).

Stacking is a sugar reduction strategy to build up to the required sweetness intensity and profile while staying below the off-flavor thresholds for all the plant-based ingredients used in the product formulation (Woo 2017). In this case, less is truly more.

You should start with the most effective plant-based, high-potency sweeteners (HPS) such as stevia and monk fruit in 3:1 to 1:1 ratios that is 300 ppm best-tasting third generation stevia RABCDM blends plus 100 ppm best-tasting monk fruit extract mogroside V 50% or 55% (Figure 1). You can make it sweeter by stacking on top non/low-caloric bulk sweeteners such as 1% erythritol or 1% allulose in beverages. Stacking this way so far with all plant-based sweeteners achieves close to 9% sugar equivalence (SE) in reduced-sugar beverages (Woo, 2017). For the next 3% SE, you need to formulate with the crossmodal correspondence principle in mind. What is crossmodal correspondence?

Crossmodal Correspondence
Crossmodal correspondence is defined as the way the brain processes information from different senses to form multisensory experiences in our daily lives (Spence et al. 2013). Crossmodal correspondence is a big field in experimental psychology but there is a part applicable to food and beverage product design. The easiest to understand and apply in sugar reduction efforts is smell–taste integration, that is, how to use “sweet” aroma in the nose to increase sweet taste in the mouth.

Let’s now look at how the second modality of smell or aroma works in humans. When we drink and eat, there is integration of the taste we perceive in the mouth (gustation) and the smell we perceive at the back of our nose when we swallow (retronasal olfaction) (Adams and Taylor 2012). When we swallow a food or drink, there is a vacuum created at the back of the mouth that draws the food aroma in the mouth toward the back of the nose. This is called retronasal smell, which is the real smell we perceive when we eat and drink as opposed to orthonasal smell (sniffing) before we start to eat and drink. More specifically on sweetness perception in the brain, retronasal “sweet” aroma (smell) in the nose increases the sweet taste perception that started with sweet taste detection in the mouth (taste) (Prescott and Stevenson 2015). This retronasal olfaction is one of the fundamental mechanisms for sweet taste modulation.

Sweet taste modulation is a cottage industry developed to make HPS taste more like sugar in reduced-sugar foods and beverages. Stacking sweet taste modulators on top of the HPS and non/low-caloric bulk sweeteners adds another 1–3% SE to the 9% SE already delivered. Sweet taste modulators, just like all ingredient technologies, go from Emerging (discovered but not yet approved) to Pacing (first one commercialized) to Mature (commoditized) (Woo 2017).

We have about 400 smell receptors in the nose (Monell 2015) operating in a many-to-many mode (Hughes et al. 2014) that is capable of detecting up to 1 trillion different odors (Bushdid et al. 2014). There are at least four mechanisms for sweet taste modulators, and more specifically sweet taste enhancers (Woo 2017). Firstly, dual-use flavor is a compound that is a sweetener at high level but a taste-less sweetness enhancer below a FEMA (Flavor and Extract Manufacturers Association) pre-approved low limit—meaning it makes others/sweeteners sweeter. Glucosyl steviol glycosides is an example. Secondly, phantom flavor is a compound that is a sweetness enhancer that is used below its own detection threshold—meaning humans cannot sense that it’s there but it makes things sweeter. Vanilla extract is an example. Thirdly, congruent flavor is a sweetness enhancer that is used above the detection threshold and delivers an aroma in the nose that is consistent with the sweet taste in the mouth. This last category includes sugar, honey, and molasses distillates. All these sweet taste enhancers are labeled as natural flavor in those countries that follow FEMA. Stacking a few hundred ppm of these natural flavors on top of the HPS and non/low-caloric bulk sweeteners achieves 10%+ SE in reduced-sugar beverages.

Ultra Clean Label Sugar Reduction
To replace the remaining 2% sugar to get to 12% SE, you can apply the concept of crossmodal correspondence beyond smell–taste and go into taste–sight/sound/touch, that is, how to use these other sensory modalities aside from smell to increase sweetness perception not in the mouth but in the brain.

Let’s start with touch. You should think “smooth” when it comes to making foods and beverages sweeter. What we call “texture” in foods is really “touch” or oral somatosensation in neuroscience. Its neuroscience fundamental is perhaps the least understood sense in human flavor perception. You should design reduced-sugar products with a smooth surface whenever possible. And this smooth-surface rule should apply to both the product and the packaging. Touching a velvety or silk surface while drinking was shown to make the solution taste sweeter (Biggs et al. 2016). Carbonation, a pain agent, was shown to reduce sweetness perception differences and made artificial HPS taste more like sugar (Sternini 2013).

When it comes to sight or visual cues, you should use “round” in reduced-sugar product and packaging designs. The round shape has been demonstrated to increase the perception of sweetness. For example, coffee in a wider round mug was rated sweeter (Van Doorn et al. 2017), and a rounded surface pattern induced a sweeter taste (van Rompay et al. 2017). Think of the color “red” in reduced-sugar beverages. Research has shown that red light made red wine sweeter and fruitier (Spence et al. 2014), and a room decorated with all red objects, a “sweet room,” made whiskey taste sweeter. Latte coffee drinks with artful round shapes in the creamy foam were rated sweeter, while angular shapes were rated more bitter (van Doorn et al. 2015). Several studies in recent years have associated sweetness with red and round shapes.

Ultra clean label sugar reduction starts with understanding and applying recent advances in sweet taste neuroscience. Build the sweetness foundation with plant-based, high-potency sweeteners such as stevia and monk fruit, and with plant-based non/low-caloric bulk sweeteners such as erythritol and allulose. Apply the principles of crossmodal correspondence to further enhance sweetness perception in reduced-sugar foods and beverages with smell, sight, sound, and touch. Think sweet aroma. Think also about red colors, round shapes, high-pitch music, and finally a smooth surface.

Source: Sugar Reduction in an Age of Clean Labeling – IFT.org