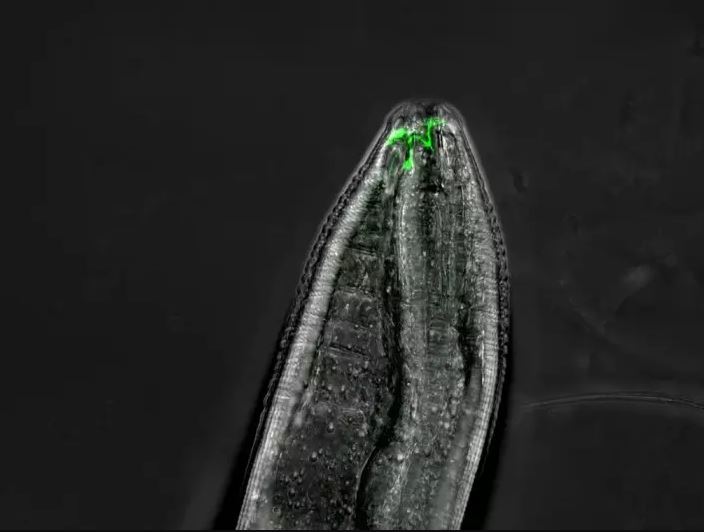 Head of a nematode, with a particular type of odorant receptor expressed by the olfactory neuron highlighted in green. (Image credit: Daniel Merritt)

For 30 years, scientists were baffled by the sophistication of the sense of smell of the worm News A protein responsible for mediating human vision helps the nematode with its smelling abilities. The mechanism may be common in animals sharing neurons for sensory inputs. The researchers used drugs to block the action of arrestin to investigate the response in worms. For over 30 years, scientists have been baffled by the excellent sense of smell of the nematode, that are able to distinguish between more than a thousand different scents despite being relatively simple organisms. Researchers have now solved the mystery behind how the nematode can achieve such a sophisticated sense of smell, providing insight into the human sense of smell as well. For their impressive sense of smell, the worms use a protein used to equilibrate visions in humans. First co-author of the paper Daniel Merritt says, “The worms have an incredible sense of smell – it’s absolutely amazing. They can detect a very wide variety of compounds, such as molecules released from soil, fruit, flowers and bacteria. They can even smell explosives and cancer biomarkers in the urine of patients.” While the nematode has 1,300 odorant receptors, humans have only 400 receptors. Human noses are lined with hundreds of sensory neurons, with each neuron expressing only one odorant receptor type. The signals travel deeper into the brain along the axons, where they are interpreted as smells.

In humans, the discrimination between smells is enabled by the physical separation of the axons. The nematodes only have 32 olfactory neurons, for their 1,300 receptors. Meritt says, “Clearly, the one-neuron-one-smell strategy is not going to work here. It seems that all the information that is sensed by this neuron gets compressed into one signal, and yet the worm can somehow tell the difference between the upstream components. That’s where we came to it.” The researchers reasoned that perhaps the worms were able to sense the strength of the smells, meaning that the worms would ignore the smells that were everywhere, and be guided by the presence of weaker smells. The protein arrestin is a well known desensitizer for a large family of proteins that perceive external stimuli, for example, allowing the vision to adjust to bright light. The researchers wondered if arrestin in worms favoured weaker smells over stronger ones. For the experiment, the researchers introduced worms with and without arrestin to environments with two different attractive smells, one coming from all around, and the other from a specific location. Without the arrestin, the worms were no longer able to home in on the weaker smell. Merritt says, “There is no case known in biology before this where arrestin is being used to allow for discrimination of signals external to the cell.” The same protein and mechanism could be active in other animals that funnel information from multiple sensory inputs through the same neurons.


Source: Scientists understand mysterious mechanism by which nematodes can smell