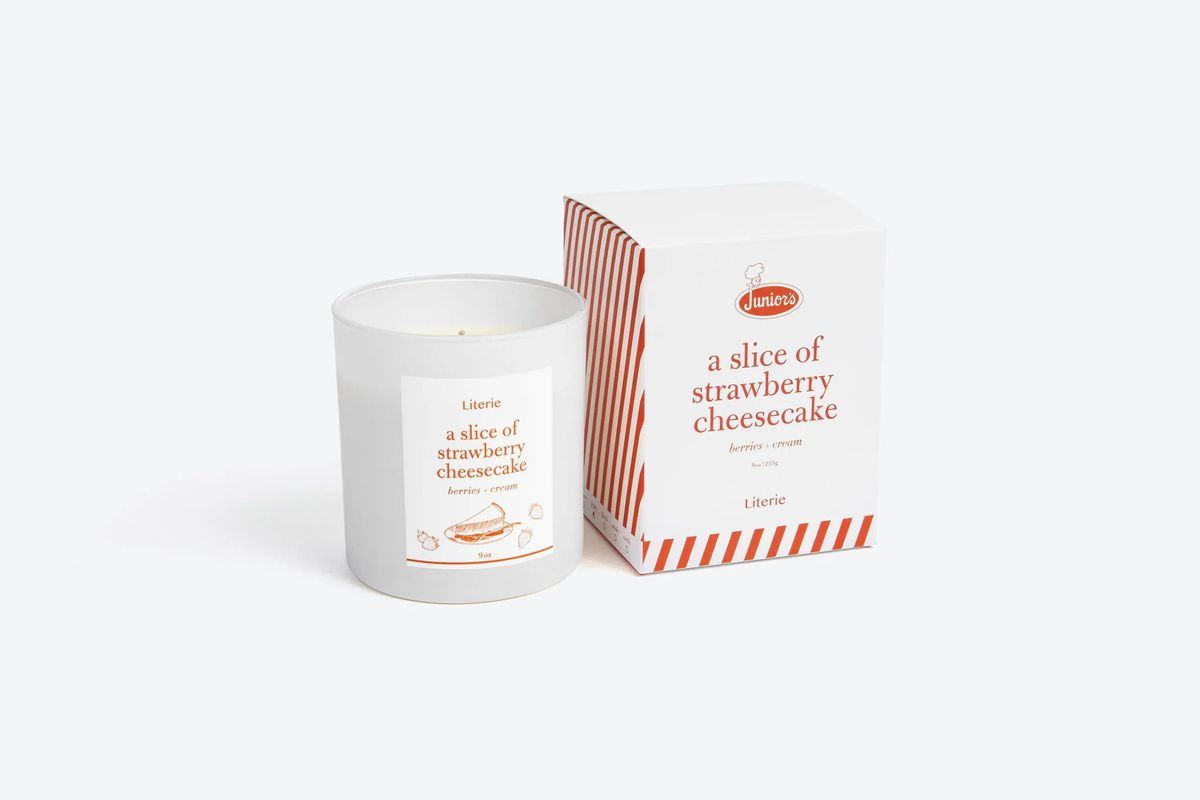 Food-Scented Candles Are the Latest Trend in Restaurant Merch | Eater

At least since the dawn of Yankee Candle, a whole lot of candles are created to smell like food. Think back to the vanilla-scented ’90s, or simply browse of the offerings at Bath and Body Works, which slings candles scented like a pumpkin spice latte or strawberry pound cake. But a new crop of fancy scented candles hopes to make your mouth water by recreating the iconic odors of specific foods at beloved dining destinations, like Katz’s Deli and Shake Shack.

This week, beloved New York City deli Junior’s announced that it had teamed up with indie candle purveyor Literie to create a candle scented just like the Brooklyn favorite’s famed strawberry cheesecake. According to a release, the candle “has notes of vanilla, strawberry, and a wink of cream cheese,” and retails for $45. It’s billed as a “postcard from NYC,” for those of us who don’t have the opportunity to just head to Brooklyn and huff the real-deal cheesecake. Fellow New York City institution Katz’s Delicatessen also recently released its own candle, scented like its legendary chocolate egg cream and served in one of the deli’s distinctive glasses.

Restaurants are also thinking beyond classic pastries and other “sweet” scents when developing their signature candles. Earlier this year, Shake Shack made its own foray into the world of home fragrances in a collaboration with high-end candle brand Apotheke. The resulting candles — one intended to smell like burgers being grilled in a park, the other a french fry dipped in a milkshake — sparked plenty of interest, only to be pretty disappointing in the scent department. One reviewer described the aroma of the Burger in the Park candle as “like having a burger near a corpse flower”; that assessment isn’t too far off.

And while candles that smell like baked goods (or chocolate-laden beverages, for that matter) make sense when sold by candle purveyors like Bath and Body Works or Target, what is curious is that brands like Shake Shack and Katz’s are making a foray into non-edible versions of their dishes. Are they hoping that lighting up a strawberry cheesecake candle will inspire such a craving for Junior’s that we literally leave our home and go buy a slice? (Or, alternatively, order a whole cheesecake online, for those of us who live thousands of miles away from New York?)

Or is it the idea that these foods are now just part of the broader cultural zeitgeist? Katz’s didn’t invent the egg cream, but it has arguably become the most globally famous purveyor of the drink. Shake Shack isn’t the first chain to make a burger, but it is arguably the one that made the fast-food burger fancy. These establishments are no longer just selling you food, they want to be part of the culture, getting us to buy into the brand in new and unique ways seemingly every single day.

Of course, restaurant merch isn’t a new phenomenon: T-shirts and other swag have provided ways for brands to be more integrated into everyday living outside of just mealtime. But by slapping extremely specific dishes on candles, an item that’s increasingly moving from the realm of Yankee Candle to bougie splurge, they’re staking their claim on these foods as cultural signifiers. These restaurants don’t just want to dominate our dining choices and our closets, now they’re coming for our noses.