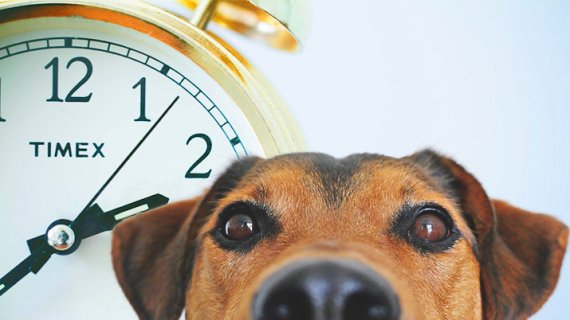 Everyone knows that dogs have no sense of time: whether you’ve been gone five minutes or two hours, the conventional wisdom is that it feels like an eternity to your dog. That’s why they’re so excited when you get back, right? Well, maybe not. A recent study conducted by Northwestern University has shown that there may be a certain part of the brain that kicks in to help animals measure how much time has passed while they’re waiting. It’s called the entorhinal cortex, and scientists discovered it by exploiting the reality-bending powers of virtual reality.

The experiment conducted by Northwestern University researchers immediately sounds like something out of The Lawnmower Man: mice are put in a real-life treadmill, which they use to advance through a VR simulation of a hallway. About halfway down the corridor, there’s a door. After arriving at the door, it takes it six seconds to open. After that, the mice can “continue” through the door and get to their reward. After going down this hallway and learning the pattern, the mice are then shown a VR simulation where the door is still there, but invisible. The mice immediately located where the door should be, then waited the six seconds for it to open, demonstrating they had the ability to measure how long they were supposed to wait.

According to researcher Daniel Dombeck: “We wouldn’t be able to make the door completely invisible in a real environment. The animal could touch it, hear it, smell it or sense it in some way. They wouldn’t have to judge time; they would just sense when the door opened. In virtual reality, we can take away all sensory cues.”

To back up their findings, the researchers used two-photon microscopy to get a picture of the brains of the mice while they completed the task. They found that different neurons fired while waiting than those used when running, and traced those neurons back to the entorhinal cortex, which is responsible for memory and the ability to place events in a framework of space and time. In essence, they found compelling evidence that mice (and probably most animals) use this part of the brain to measure the length of their waits.

According to Dombeck: “As the animals run along the track and get to the invisible door, we see the cells firing that control spatial encoding. Then, when the animal stops at the door, we see those cells turned off and a new set of cells turn on. This was a big surprise and a new discovery.”

Source: Scientists Have Figured Out How Animals Measure Time By Creating VR Simulations