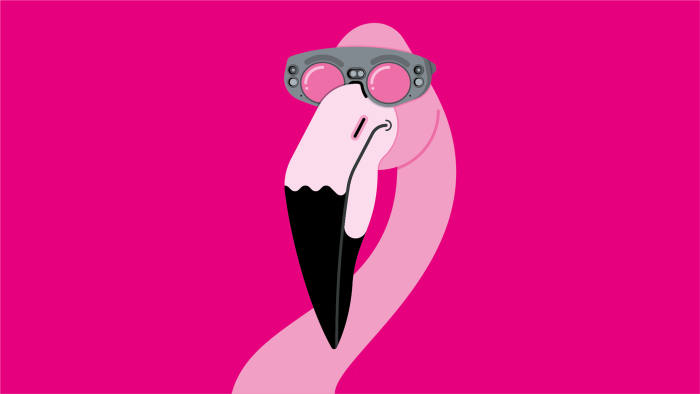 Does virtual reality need a dash of magic? | Financial Times

Otherworldly fantasies are not hard to find in California, where Elon Musk’s SpaceX rockets trail across the sky and Amazon’s Jeff Bezos plots a life on Mars. Conjuring ideas that defy day-to-day existence is a lucrative business. There is a reason that “unreal” is Musk’s go-to compliment. Florida, on the other hand, is not known for its outlandish tech scene. Yet secretive local start-up Magic Leap has made a vision of the future there that earned it a $6bn valuation before it ever sold a commercial product. The company’s ideas take some getting used to. Founder Rony Abovitz announced this month that spatial computing was forging the Magicverse — a place where virtual reality blends with the real world.

In the Magicverse, human capabilities will be enhanced, your data will be all your own and you won’t need to spend half the day staring at your phone. Who needs screens when the internet is all around? Magic Leap has a habit of making outlandish claims. For years the most it revealed about its product was an inscrutable ad in which a hall full of people watched as a life-sized, computer-generated whale broke through the floor and twisted in the air before crashing back down, splashing water across the room. It turns out that entrance to the Magicverse will cost you the price of a Magic Leap augmented reality headset — currently $2,295.

At the company’s first conference, everybody present was noticeably careful when lifting them up: no one wants to be stuck with a gigantic bill for damages. Once on, the headset experience is not quite access to another universe. No whales leapt out of the floor, although a talking kiwi hopped on the table. But it is beautiful and surprising to be able to paint swipes of virtual colour on to a real wall and see a computer game play out in the room you’re in. We have been waiting a long time for virtual reality to enter everyday life. In the early 1960s, the Sensorama provided an immersive visual experience with stereo sound, a smell generator and vibrating seats. But the machine was the size of a cashpoint and films such as I’m a Coca-Cola Bottle were unlikely to be smash hits. Later iterations, such as virtual reality headsets from Facebook’s Oculus, Samsung and Google, remain niche purchases. Magic Leap’s device is mobile but I thought of the Sensorama this week when a journalist from Gizmodo committed the tech-world taboo of asking what this impressive, expensive hardware was actually for.

It is tough to be a killjoy when AT&T, Google and other backers have endowed the company with billions and the headsets on display are only the first iteration. While it is reasonable to ask what the uses will be, it is also reasonable to expect the headsets to find more of them as more developers are involved. The bigger question is whether Magic Leap can convince the rest of us to start putting wearable tech on our faces and quell the rising panic about the extent to which the internet already infiltrates every waking moment. Steve Mann, a professor at the University of Toronto and a proponent of wearable tech, has been wearing a computer that looks like a metal visor for decades. It is, he told The New York Times, simply a tool — similar to an abacus worn around the neck of people in China hundreds of years ago. But augmented reality headsets provide far more information than an abacus. Sensory overload could be a problem. In the quiet room, it was not an issue. On a busy street, who knows?

There has been a recent rash of inventions designed to shut out distractions. The latest is Panasonic’s Wear Space — a fabric shield that wraps around the back of the user’s head to block out their peripheral vision. Given the choice between walking along my grubby street and doing it in a Magic Leap headset that layered virtual images over the real world, I would pick the headset. But perhaps it will never come to that. The future of augmented reality could end up being altogether more prosaic. If you have a new iPhone, then Apple’s Measure app will let you use a smartphone camera to measure items in the real world. AR is already here — it just doesn’t feel very magical. Elaine Moore is deputy editor of the FT’s Lex column