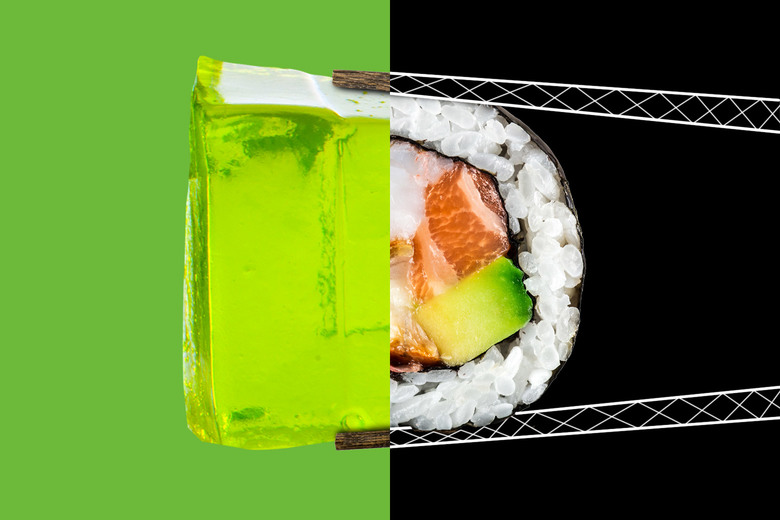 By msensory team23/05/2019No Comments
You sit down at a table and put on a virtual reality headset. On the plate in front of you is a hydrocolloid called agar-agar—a low-calorie thickening agent made from seaweed—that has been 3D-printed in the shape of a sushi roll. And what you see, through the lens of the headset, is a sushi roll. You pick it up and aromatic diffusers activate, releasing the scent of ginger and wasabi and soy sauce. You put it in your mouth and, lo and behold: You taste sushi.

Or at least, that’s the idea. This technology is just one set of a myriad of gizmos and gadgets that a company called Project Nourished has been developing to provide its customers with what it bills as “gastronomical virtual reality experiences.”

Like other experiments in digitally or otherwise simulating or enhancing taste, Project Nourished’s innovations are mainly based on some somewhat counterintuitive scientific principles that show that much of what we think we taste, we don’t actually taste. Instead, our full experience of taste is deeply linked to our other senses: smell, vision, touch, and even hearing. Influence those other senses—with, say, familiar aromas, shapes and colors, textures, or a noise like a satisfying crunch—and you can trick how you perceive taste. “Think about birthday cake, and how we crave that experience,” said Jinsoo An, the founder of Project Nourished. “It’s an experience that’s edible, with the cake and everything that goes into it, but there’s also the singing, the candles, the decoration, all of which are layered on top this very rudimentary food. It’s really also about the experience.”

An is excited about the a whole range of possible outcomes from this kind of virtual reality and food. He said he imagines that the technology could help feed people more sustainably by allowing for substitution and simulation of one food for another—think, tasting a beef burger without eating one made from cows, or getting the satisfaction of a sublime seafood dish without contributing to overfishing—or similarly help with weight loss and control of overeating. Perhaps above all, he also hopes it will create the weird pleasure of a totally new way of dining.

Project Nourish’s experiences aren’t yet available for trial. An said that the company plans to open-source all the technology in the near future so that anyone can use its model to create their own dining experience. But when they do debut, they won’t be alone.

Other forms of augmented reality and virtual reality tech has started to trickle into restaurants in the form of “experiences” that range from mostly gimmick to totally uncanny. For example, at a new Tokyo virtual reality restaurant, visitors are guided through a multicourse meal meant to illustrate chapters in “the journey of life”—complete with a live narrator, light show, soundtrack, gusts of wind, and, for one course, VR headsets that bring fashionably dressed farm animals to the table to dine alongside you. (A reporter that dined there described it “magical.”) On the other end of the spectrum, last spring in London, restaurateur Jamie Atherton launched an augmented reality cocktail bar. It, less magically, requires imbibers to download an app that allows them to see works of art and other visuals associated with their drinks.

Yet at the heart of this next-generation array of attempts to disrupt the dining experience, there seems to be the same question that’s fascinated scientists, cooks, and entrepreneurs over the ages: Can new technologies remake the human experience of taste? And in doing so, remake ourselves?
The fantasy of eating one thing and tasting another is by no means new. One could look to the Bible: In the Gospel of John, Jesus turns water to wine. The miracle reflects a human fascination with the transmutation of substances—how marvelous would it be to have one thing, and then turn it into another? Or what if you ate or drank nothing, but still experienced it as something?

This latter idea was picked up by Italian futurists F.T. Marinetti and Fillia in their 1930 Manifesto of Futurist Cooking. Among other absurd and unpopular suggestions like banning pasta—a meal they tied to sluggishness, pessimism, nostalgia, and lack of purpose—they advanced the idea that some food should only be experienced with the eyes and nose. As part of this, the pair proposed dining experiences that involved the rapid presentation of a series of dishes, some to be eaten and some to simply smell or appeal to the eye and imagination. They also proposed that traditional kitchen equipment, including knives and forks, be banished, and instead replaced by the equipment of modernity, like ozonizers, ultraviolet lamps, dialyzers, and chemical analyzers. By presenting the population with these imaginative food combinations, they wrote, they aimed to advance the “noble and universally expedient aim of changing radically the eating habits of our race, strengthening it, dynamizing it, and spiritualizing it” by ridding the population of the inefficient food of “quantity, banality, repetition, and expense.” (You may not be surprised to learn that Marinetti was also developing his ties to Mussolini at the time.) Fortunately for all, traditional Italian food survived.

Miracles and proto-fascism aside, today’s virtual reality experiments draw on some of the same basic desires that have animated human thought about transforming food. The goal—very broadly defined—is not turn water into wine; it’s to trick our brains into thinking that agar-agar tastes like sushi.

There’s reason to think we may be getting closer. Scientists at Cornell University published a study last July that supported hypotheses virtual reality can be used to enhance taste. In it, participants were given identical samples of blue cheese in the two virtual environments: one a barn full of cows, the other a botanical garden. Those who were in the barn setting rated the blue cheese as more pungent, likely due to the audiovisual cues spilling over into other senses, said Robin Dando, the food scientist at Cornell who spearheaded the study. Dando said he saw the study as a “proof of concept,” confirming existing research with the aid of new technology.

Of course, it’s still a far cry from water into wine. Or from the even more elusive taste, but without calories. “I don’t think we can really talk about that yet,” Dando said. “But I think that what we can probably start thinking about is using modulations of taste to cut down on salt and sugar and fat in foods.”
The goal—very broadly defined—is not turn water into wine; it’s to trick our brains into thinking that agar-agar tastes like sushi.

Charles Spence, an experimental psychologist at Oxford who heads its Crossmodal Research Laboratory, suggested that we might think of much of what’s on the horizon for our taste buds as a pursuit of “digital seasoning.” Beyond VR and AR, this might include the possibility of electrically stimulating our taste buds—a technique that’s existed since the 1950s or 1960s that basically involves using a silver electrode at the tip of your tongue to send signals that stimulate the areas that receive salty, sweet, sour, bitter, and umami tastes. It only works in some people. And, thus far, it’s been easier to produce salty and sour than it has been to produce sweet. But the technology has already been incorporated into commercial prototypes, like an electro-fork that will zap your tongue into thinking you’re tasting salt.

But, Spence says, this method brings us back to the main issue with taste. “The problem arises that most of what we think we taste, we actually smell, so even the perfect electric taste wouldn’t give [smell] to us,” Spence said.

This brings us to the real biggest roadblock to remaking our tastes through technology: smell. Smell remains a kind of unhackable sense—strangely primitive, deeply complex, and hard to mimic even with our most cutting-edge tech.

The electrical current route, for one, hasn’t been very promising. In a study published in 2016, researchers attempted to activate smell by applying electrical currents in the nose to activate subjects’ olfactory receptor neurons. Of the 50 people that participated, not a single one perceived an odor. This likely has to do in part with how smells combine. “It’s more of pointillist sense,” Spence (who was not involved in this study) said. “A nice wine might trigger hundreds of sense receptors and we don’t really know those receptors combine.”

A more promising option may lie in aromatics—the approach Project Nourished is taking to the tricky business of smell. Rather than trying to fake it, the company is using chemically engineered scents diffused during the meal.

Still, there are hurdles. “What is most challenging is the latency that occurs when the scent is initially triggered,” An said. “For example, when you bake a bread in an oven, when should it reach your olfactory receptors in your nose? In reality, a scent doesn’t simply appear and disappear.” It wafts, plumes, pools, eddies, pierces, pricks, tingles, scatters. In mixed reality, An said, the system needs to be able to activate and deactivate various scents. And that has some practical limitations. “It’s not like color printing, where you’ve got the same three colors and they can make all the others,” Spence said. You need every individual scent on its own. The diffusers also require refilling, which can make it expensive and impractical.

These limitations were part of what led to the downfall of DigiScents, a company that during the height of the dot-com bubble raised $20 million to create what one of the founders called “a printing press for scents”—a way to digitally transmit every existing smell. A lack of consumer interest, combined with the absurd cost of digitizing scents, led it to shutter in 2001, just two years after the prototype was launched.

Smell might prove once again to be a sticking point of sorts for these new technologies. Many, though, remain optimistic that it’s possible to unlock the secrets of taste. Or, at least make eating more interesting.

Katsunori Okajima, a professor and researcher at Yokohama National University in Japan who focuses on virtual reality and sensory and brain sciences, said that tricking the brain is within the grasp of our scientific capabilities. He has developed and tested an augmented reality platform that performs simple visual tricks—adding cream to coffee visually, or making salmon look like tuna. The visuals were fairly successful at fooling people’s brains, perhaps in part because of their simplicity. Salmon into tuna isn’t water into wine. Okajima hopes to make a tablet version of his AR conjurings available for commercial use later this year.

“It’s like an illusion,” Okajima said. “Illusion is not mystery, but a science.”

Source: What 3D-Printed Virtual Reality Sushi Might Foretell for the High-Tech Future of Eating