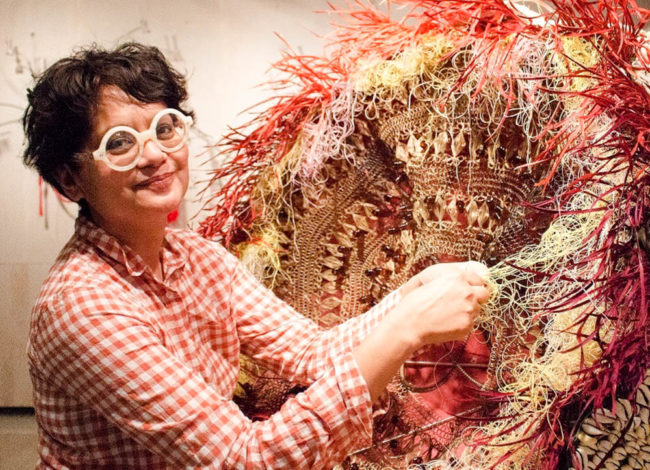 Rina Banerjee originally received a degree in polymer engineering from Case Western Reserve University before turning her knowledge of base materials into art. She received her Master of Fine Arts from Yale in 1995.

Celebrated multimedia artist Rina Banerjee spoke to Brown community members yesterday about her trajectory from a research chemist to a sculptor showcased by the Whitney Museum of American Art. Banerjee is well-known for creating dynamic, multisensory artwork that explores themes of migration, otherness and global interconnectedness. In her lecture entitled “Make Me a Summary of the World,” Banerjee spoke with Assistant Professor of History of Art and Architecture Holly Shaffer about the ways her immigrant identity and scientific background have profoundly influenced her work.

Banerjee was born in Calcutta, India in 1963 and immigrated to London with her family at age three before settling in New York. While Banjeree and her family members often felt “displaced” and “clumsy” in the United States, they also reveled in the excitement of “choice” that the United States offered.

“Defining yourself as an American immigrant was very different than being South Asian in London,” Banerjee said. One of the ways in which her family constructed an identity in a new country was by curating an assemblage of household objects, she added. “I found myself watching my mother make choices, like: the lamp … would be Chinese, the carpet should be Indian, the curtains should be from Sears, the Tupperware should be from Tupperware.”

Banerjee’s curiosity about the personal and cultural significance of household objects would later inspire much of her artwork. But coming from a family of engineers, she faced “a lot of pressure” to follow suit, so she studied the sciences and received a degree in polymer engineering from Case Western Reserve University. She soon found that engineering was not her calling, but her studies taught her volumes about how to make “useful” things from base materials. This knowledge inspired her to start making sculptures that combined plastics and found objects. She enrolled in a Master of Fine Arts program at Yale and received her degree in 1995.

Since then, her work has been featured in countless prestigious biennials and is currently featured in a mid-career retrospective at the Pennsylvania Academy of the Fine Arts. Banerjee and Shaffer discussed a number of her early and recent works, including the installation “Home within a Harem,” a bedroom-resembling installation exhibited in 1998, and “Bone Flower,” a 2006 installation of antique lanterns covered in beads from a Caribbean and African store in Union Square. The crosscultural sculptures were placed in a sand-like base to make them look “washed ashore” — a reference to the experiences of migrants.

Oliver Coulson GS, a history of art and architecture student, said about Banerjee’s work: “It’s an interesting way to think about portraits beyond the traditional concept of the art form.”

Shaffer, whose scholarship focuses on 18th- and 19th-century arts in South Asia and Britain, reflected on being personally touched by Banerjee’s work. Banerjee “has been one of those rare interlocutors who has helped me to see and understand, particularly how contemporary migrations of people and objects can trace back to Empire and colonization.”

Sponsored by the Brown Arts Initiative, Banerjee’s talk was part of the Warren and Allison Kanders Lecture Series, an “annual series of presentations and student interactions led by prominent contemporary artists and art-world luminaries” at Brown.