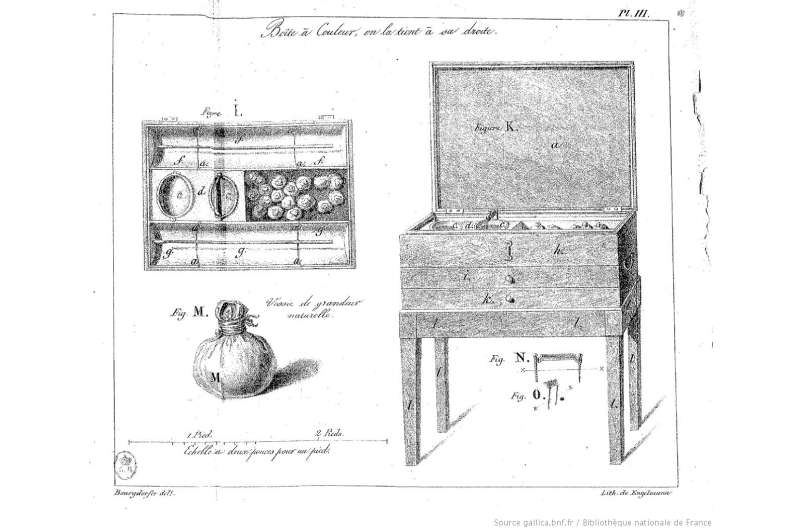 Making scents of the past by reproducing historical fragrances | Phys.org

Recreating long-faded smells from history to evoke the past is a new way to experience culture in museums and tours.

Ever since the days of the ancient Greek thinker Aristotle, it has been supposed that there is a hierarchy of the human senses. Sight comes out as the most important, then hearing, with smell, taste and touch lower down.

But if senses like smell get less attention in the here and the now, they get almost none when it comes to the past. When we think about cultural history—perhaps visiting a museum or looking at classical art—we tend to rely exclusively on our eyes. Yet the sense of smell, when it does come into play, can be powerfully evocative. So perhaps it is appropriate that researchers are paying much greater attention to the smells of the past.

How about this question, for example: what did everyday life smell like 200 years ago?

Most historians who have considered this tend to think that, since hygiene then wasn’t what it is now, the overwhelming scent of life would have been human body odor. Art historian Dr. Érika Wicky had never questioned this assumption until she was looking through newspapers from the time and started noticing adverts for odor-free varnishes. That reminded her that varnishes of the time were usually extremely potent, smelly chemicals. It got her wondering what the smells of an artist’s studio would have been like.

At the time, Wicky was based at the Rhône-Alpes Historical Research Laboratory in Lyon, France. One day, she heard about a color-mixing cabinet that belonged to the French painter Fleury Richard, who worked from around the turn of the 19th century.

The cabinet had been preserved in great condition in the bowels of Lyon’s Museum of Fine Art. It was stocked with more than 100 pigments and other artists’ materials, each wrapped in paper, with notes affixed in the painter’s own hand saying what each one was.

“It is a beautiful object, but a dangerous one,” said Dr. Wicky. “Some of the pigments contain 60% arsenic.” But she realized this cabinet would be a great source to explore how a painter’s studio would have smelled.

And so she began a project called PaintOdor, aiming to work out what the dominant smells in a painter’s studio would have been. Using the evidence of the cabinet and written materials from the time, and the knowledge of other experts, Dr. Wicky has shown that there are four key smells that would have hung in the air of a painter’s studio at the time.

These are linseed oil and turpentine, which were used for mixing oil paints; a glue from rabbit skin, which was used painted on canvases to make them more rigid; and varnish, which was applied to the finished painting to protect it.

Dr. Wicky has been collaborating with parfumiers at the Swiss flavor and fragrance company Givaudan to recreate the smells of these materials (some of the real chemicals, such as turpentine, are too toxic to use). The plan is to use these at an exhibition of Richard’s paintings at the Lyon museum next year. The plan is to give visitors a leaflet to guide them through an exhibit from which they will be able to peel off stickers to sniff the odors of the artists’ materials.

Dr. Wicky is now finishing off a book about her project. And she is hoping to continue studying the role of smell in classical painting. She points out that smell was also a way for painters to acquire knowledge. They would often check the composition of pigments, which were very expensive, by burning small amounts of them and sniffing them—to check the merchants were not trying to cheat them.

A second piece of research could broaden the scope of our knowledge of historical smells much further. ODEUROPA is a project aiming to develop ways of capturing Europe’s historical olfactory culture and explore how institutions such as museums can use smell to increase the impact of their collections.

“This is the very first European research project to develop state of the art computer science methodologies to capture and document the role smell has played—and still plays—in our culture,” says Prof Inger Leemans at the Royal Academy of Arts and Sciences (KNAW) in the Netherlands.

To begin with, the team looked at a large number of digital records—images, paintings texts from the 17th to the early 20th centuries and labeled these to highlight references to smell. They then trained a machine-learning algorithm to recognize these references to smells, and then set the algorithm to work on caches of artworks and historical sources in scholarly databases. This has enabled the team to produce a semantic web of smells (called the European Olfactory Knowledge Graph), which can help researchers understand how and where smells were created, experienced and understood.

The team have published several papers detailing their methodology. The hope is that this web of knowledge will enable researchers to explore how smells have evolved over time.

“We are currently developing a search engine that can help users discover related smells, in a similar manner to how internet search engines work,” says team-member Marieke van Erp. Not yet publicly available, the plan is that a version will be on the web in the near future.

Another major part of the project involves giving cultural institutions a greater ability to communicate the importance of scents to the public. In November 2021, the team carried out a test tour at the Museum of Ulm in Germany where visitors could see the art and smell relevant smells from the past as they went along.

For instance, visitors viewed a 1628 painting of a wealthy woman holding a pair of scented leather gloves. Such gloves were a popular gift and accessory at the time. And the team worked with parfumiers from the company International Flavors and Fragrances to recreate the scent so that visitors could sniff it as they viewed the painting.

Overall, visitors have really enjoyed the experience, says George Alexopoulos, another team member. “For many, using the sense of smell in order to think about objects, stories and places seems to be interesting and it is something new and different.”

One interesting part of the research is that people react to smells differently. There are certain smells that certain people can’t detect, for instance. And during the Ulm Museum project, the team concocted something that was supposed to represent the scent of hell, which was depicted in one painting. Some visitors found it clearly unpleasant while others deemed it to be too pleasant to fit with a concept so terrifying as hell.

The team is hoping that, in future, other projects will be able to draw on its methods and tools to further incorporate scent into cultural institutions. And for the moment, it is continuing to develop similar smelly tours. The latest, called City Sniffers, is a walking tour of Amsterdam where people can carry along a scratch-and-sniff card so they can experience relevant smells along the route.

Source: Making scents of the past by reproducing historical fragrances