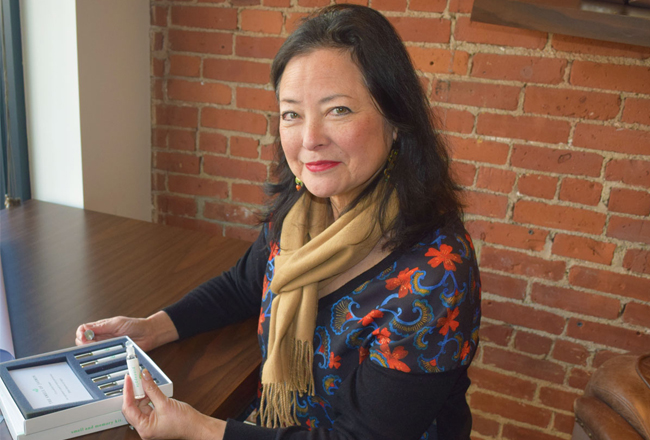 Ruth Sutcliffe is a professional scent developer who has taken her olfactory-enticement skills to stellar heights.

“I have 30-plus years of experience as a fragrance developer at Clairol and Coty,” she recalled. “I worked with a lot of celebrities, including Beyonce, Celine Dion and Katy Perry to develop perfumes for them for the marketplace.”

While Sutcliffe’s professional life was exciting and glamorous, she quietly shouldered challenges in her personal life. In 2016, her mother passed away from dementia-related causes. Sutcliffe’s mother-in-law was diagnosed with Alzheimer’s disease, and Sutcliffe noticed that she only expressed a preference for sweet or salty foods since the onset of the disease.

“I read that losing the sense of smell could be an early indication of Alzheimer’s,” she continued. “I had one of those bingo, connect-the-dots moments: wouldn’t it be wonderful if I could stimulate my mother-in-law’s smell so her sense of taste would come back? I am not a doctor, but it was a creative brainstorm that I had.”

The Greenwich-based Sutcliffe, through her startup business, The Scent Guru Group LLC, began experimenting by creating small smell prompts that simulated the distinctive aromas of nature and the kitchen. She developed 60 scent prompts and narrowed the collection down to 12, then divided them evenly between the first and second editions of what became the Essential Awakenings Smell and Memory Kit.

“I have jasmine, cinnamon, pineapple, mint, chocolate and grass in the first edition,” said Sutcliffe. “And there is apple, lilac, vanilla, lavender, pine and popcorn in the second.”

Essential Awakenings works by rolling the scent prompt onto flesh and having the patient try to identify the smell. Sutcliffe stated that using rollerballs was more effective than spraying, adding that her products are “very safe for the skin — there is no alcohol in the formulations, and they were developed by perfumers I used to work with in the industry.”

Each Essential Awakenings kit also comes with corresponding clue cards that can be used as a guide for this form of therapy, as well as for playing a “guessing game.” Sutcliffe theorized that Essential Awakenings would be ideal at assisted living communities where residents could benefit from stimulating activity.

“I started going into assisted living communities and started giving smelling sessions,” she said. “I cold-called Atria Stamford in 2016 and asked the program director if I could come in. I had no idea what to expect.”

What Sutcliffe discovered was that assisted living residents who experienced the scents began to recall memories related to specific scents. Sutcliffe noted how one resident responded to the scents by recounting her formative years in a valley in Switzerland. “You have to ask yourself, when was the last time she told that story?” she added.

Over the past two-and-a-half years, Sutcliffe has conducted approximately 60 Essential Awakenings scent therapy sessions at schools and facilities in Fairfield County, Westchester County and New York City. She has made the product available for sale through her Scent Guru Group website and other e-commerce resources, including Amazon and The Alzheimer’s Store.

Sutcliffe also realized that scent therapy could have therapeutic value as a communication tool for children with autism.

“A former colleague at Coty has a son who is nonverbal autistic, and I called her up one day and she said to come down to her son’s school in Brooklyn and see how this works out with them,” she said. “There are various levels of autism, so I realized the need for visual cue cards. I put photos connected with the different smells and created a multiple-choice game of matching the smell prompt to picture. For nonverbal students, they had an almost perfect identification of matching cue cards with smell prompts. It was a tool to get them to communicate — and the verbal students had a great time, telling us how much they liked pizza or the smell of peaches or chocolate.”

Based on this experience, Sutcliffe developed Mindscent as an educational tool for students on the autism spectrum. Mindscent includes 20 scent prompters and corresponding visual cue cards, and Sutcliffe is donating 10 percent of her sales in 2019 to the nonprofit Autism Speaks. She is also helping the local economy by having Mindscent assembled and packed by Abilis of Greenwich and Ability Beyond of Bethel.

“I am not a medical professional. I am a professional in scent development,” she said. “Would a neurologist be doing this? I went in as a volunteer because I asked myself, ‘How can I help people in a very important and unique way?’ ”

Music… will help dissolve your perplexities and purify your character and sensibilities, and in time of care and sorrow, will keep a fountain of joy alive in you.