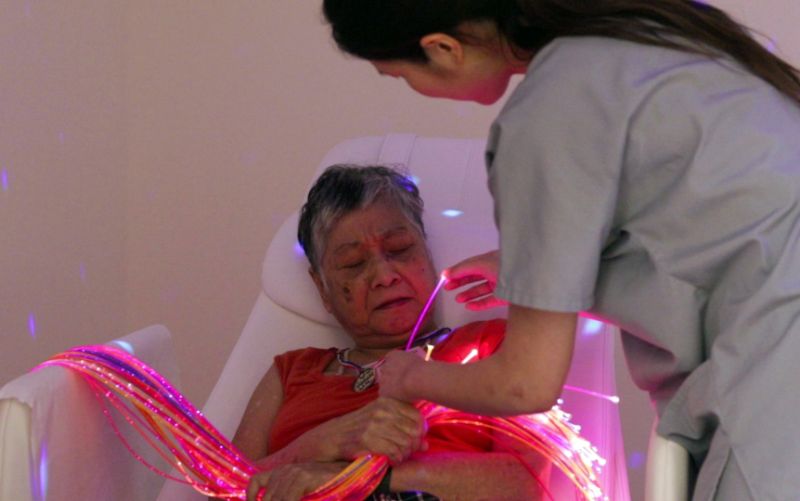 SINGAPORE — “I used to wear red, orange and chocolate coloured clothes to work. My favourite colour is green,” said Chua Mui Noi, 69, in Mandarin, as she deftly picked at fibre optic strands lit up in eye-catching shades.

“So cute. Is that a boy or girl? I love kids,” she later cooed softly to a cheeky-looking baby boy doll nicknamed Nathaniel, while lying down on a leather chair that rocked to nature music.

Speaking to her therapist, she asked, “Is the boy currently attending school? He looks like he is about eight years old.”

Occasionally, her conversations took on a dour tone. “Did they tell you about my bad leg? Was it my mother – is she coming to see me? I have never seen her before in my life,” she mused.

When the lights came back on, marking the conclusion of her time on the chair, Chua eased her way to a “sensory” wall for the next segment of her session.

The slight but sprightly woman wore various items dear to her: a reedy beaded necklace, a black plastic watch with its face pointing away from her, and a slightly-worn medallion.

Inscribed on the last accessory was the word “winner”, a memento earned by Chua from a group song & dance talent show for dementia residents at Orange Valley Balestier Care Centre.

The multi-sensory room – also known as Snoezelen – is part of a therapy offered at the centre to aid individuals, like Chua, with dementia.

Snoezelen, which is a blend of two Dutch words meaning “explore” and “relax”, was first developed in the Netherlands in the 1970s to deliver stimulation through lights, colour, sound, and scent in a controlled environment.

Initially designed for those with autism and other developmental disabilities, it has been in recent years used as part of treatment for those with dementia.

While snoezelen rooms have been commonly available in European countries for decades, they have only been making inroads in Singapore in recent years, in tandem with the rising number of people with dementia.

In Orange Valley Balestier Care Centre’s case, it converted an 8.8sqm outpatient consultation room into a snoezelen room and rolled out its efforts in June.

Over 20 residents suffering from moderate to severe dementia who are unable to participate in group activities take turns to visit the room, typically once a week for a one-and-a-half-hour session.

Jamie Choy, a therapist at the centre, stressed that each session plays out uniquely for each individual dementia patient.

“(Each resident) will respond to items differently, so the therapist will have to be sensitive to their needs and modify our interventions accordingly,” said the 32-year-old.

This can include first lying or sitting on the room’s star “attraction”, the Wellness Nordic Relax Chair, a fully-automated contraption that comes with a built-in audio system and three pre-set automatic programmes offering multi-sensory stimulation.

A “water effects” projector, a disco ball, and light fibre optic strands provide both visual and cognitive stimulation for the residents when they are asked to identify colours by the therapist.

A sensory wall made of different tactile materials, such as sponges, foam, pens and corrugated boards, encourages residents to “reactivate” their senses.

The residents may also be treated to “spa-like” treatment, such as gentle hand massages, hair brushing, and aromatherapy.

One of the main purposes of such rooms is to allow them to remain calm so they will be able to engage better with staff and family members, said Choy.

The number of flavors is infinite, for every soluble body has a peculiar flavor, like none other.