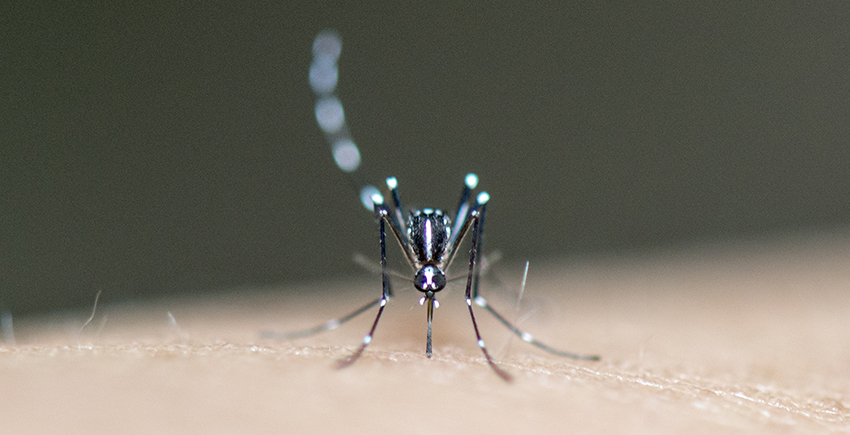 When construction wraps up, Josefina del Mármol’s new laboratory on the Harvard Medical School campus will look a lot like those that surround it, with rows of benches sporting chemicals, glassware, and computers.

What will set it apart are the scents: the citrus aroma of a compound called limonene; the clove-like fragrance of another compound, eugenol; the pungent odor of geosmin, reminiscent of a damp cave.

“It does smell quite unique because I use dozens of different odorants for my experiments,” she said. “Some are pleasant, and some are awful, and the scent often lingers.”

These aromatic compounds allow del Mármol, assistant professor of biological chemistry and molecular pharmacology, whose lab officially opened in the Blavatnik Institute at HMS in late April, to investigate how animals detect and identify scents.

Using mosquitoes and other insects as model organisms, she tackles longstanding questions about how smell helps us navigate the world around us—insights she hopes will lead to new ways to combat diseases such as malaria, dengue fever, and West Nile fever that are transmitted when insects sniff out human hosts to bite.

Del Mármol, who was recruited to HMS as part of an interdepartmental cohort search over the last two years, comes to the School with a string of awards and publications. She was one of seven postdoctoral fellows accepted into the inaugural MOSAIC (Maximizing Opportunities for Scientific and Academic Independent Careers) program from the American Society for Biochemistry and Molecular Biology and a member of the first class of Howard Hughes Medical Institute international student research fellows.

She spoke with Harvard Medicine News about the satisfactions of studying smell and what she wants to discover next.

HMNews: What drew you to the sense of smell?

Del Mármol: I’ve always liked sensory processes. In animals, what we have around us are lots of physical and chemical stimuli, and our cells have to put all of that into a common language. Tons of proteins in the cell membrane do that job in very interesting ways.

I worked on the sense of touch early on in my graduate studies. Then I realized the sense of smell, or olfaction, is really mysterious at the molecular level. We don’t know much about how odors are detected. It’s a primal sensory modality that we know so little about.

I started digging into what’s going on. Why don’t we know more? In the past 30 years, there has been immense progress in a lot of fields that converge here, and we’re at a junction now where we can study the structures of proteins important for olfaction. It’s a wonderful time to be doing this work.

HMNews: How can studying mosquitoes and other insects help?

Del Mármol: Insects are spectacular organisms to do science with. They have an enormous diversity of lifestyles, so to speak. They have adjusted to living in many conditions.

There are many organisms you can study olfaction in, including mammals. For me, insects give me this dual happiness where they can provide insights into how odors are detected and also how olfaction enables disease transmission. 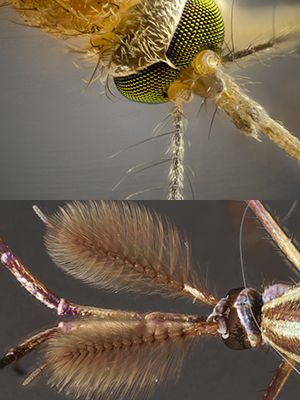 Ultimately, for me, mosquitoes are great model organisms because they have robust behaviors. They bite humans fairly consistently; they’re very tenacious. We know they navigate the olfactory space efficiently. We can ask, what is the smell of a human, what are the relevant receptors, what are the relevant odors, and how do the smells differ between a human and a nonhuman mammal, which mosquitoes can distinguish very well.

I think this line of inquiry will be informative and provide a good opportunity for thinking about how to contain mosquitoes, especially as everything is getting hotter. With climate change we see mosquitoes where they haven’t been before, moving farther north. Mosquito- and other vector-borne diseases are becoming more pressing in more places. Where I come from, in Buenos Aires, we are seeing a sharp increase in cases of dengue fever compared to a decade ago, and it’s becoming a big problem.

We have Chagas disease in Argentina, and it’s understudied because it is not found in the Northern Hemisphere. A lot of vector-borne diseases are a huge problem in the developing world. This is one aspect of human health that I think my lab can approach.

HMNews: Some scientists feel drawn either to fundamental, curiosity-driven research or to work that has immediate relevance for treating disease. What led you to stand with one foot in each world?

Del Mármol: I do basic science and I am really interested in that—in understanding how biophysical processes occur in cells, how proteins perceive forces or other molecules. We get so much information from trying to understand at the atomic and molecular levels how these processes occur. It tells us a lot about how we perceive the world and what are the limitations and abilities of the senses.

While I’m curiosity-driven like my colleagues around me, I like to keep a leg in some aspect of human health in my career. It’s grounding.

Knowing that vector-borne illnesses take the lives of almost 1 million people every year is very motivating. Because we don’t know the molecular structures of most of the olfactory receptors in these insects, we have so far been limited in our ability to develop drugs and repellents that curb the spread of these diseases by, for example, interfering with insects’ ability to smell humans or changing the way humans smell to them.

HMNews: What kinds of questions and experiments do you engage with day to day?

Del Mármol: Some questions are:

What are the basic principles governing how olfactory sensory neurons detect and discriminate the chemical space of odors?

How do mosquitoes differentiate odors that are made of combinations of millions of diverse compounds when they have fewer than 200 olfactory receptors? What is the chemical logic that underlies the combinatorial coding of odors? How can some receptors recognize several hundred compounds?

What are the structures of insect olfactory receptors and how do they work?

How can we use those structural and functional insights to develop new pharmacological tools?

Answering those questions involves many different techniques. We use cryo-electron microscopy and a variety of biochemical, electrophysiological, and functional assays. I envision my lab as having people with different interests, such as in biomedical processes, translational research, pharmacology, how the brain works, and how chemical specificity is encoded in the structure of proteins.

HMNews: Does this mean you’ll be making use of the Harvard Center for Cryo-EM?

Del Mármol: Yes, I’m really excited. Cryo-EM has been an incredible tool that lets us uncover the structures of proteins that were hard to study before. Combining structural insights with computational techniques and in vivo experiments means that we can follow our questions even further along. It’s exciting that in the same lab we can have people looking at how a protein works and how modifying it impacts an animal’s perception and behavior. We can follow a thread from structure to higher-order processes. Because of the amazing community at HMS, I don’t feel there’s any limitation.

HMNews: What’s been occupying you lately?

Del Mármol: The receptor I’ve worked with in the last few years has a very difficult job. It has to detect odors made of very small molecules that are very similar to one another and are not prone to establishing strong interactions with proteins. In conversations, scientists often call them “bad” ligands [molecules that bind to receptors]. They are, but that is what odors are made of and we don’t get to choose which molecules in the chemical world are the ones we need to detect. The olfactory system doesn’t get to shy away from them. These are the constraints and challenges all olfactory receptors face.

HMNews: What do you enjoy doing outside the lab?

Del Mármol: Most of my nonwork time goes to taking care of my daughter.

I played piano early on. My grandmother used to play, so there was a sort of family component. I actually thought it was going to be my career for the longest time; it was the one thing that I had always been very interested in. I just happened to have a wonderful teacher in high school who swayed me a bit more toward science.

I just parted ways with my piano, actually. I haven’t wanted to invest in a good piano in the past 10 years because I was moving around a lot and always had to part ways with my piano with every move. I think that might change now that I am here in Boston for the long haul, and I am looking forward to finally shopping around for a good piano this time! I’m also looking forward to events like the Tanglewood festival.

This interview was edited for length and clarity.