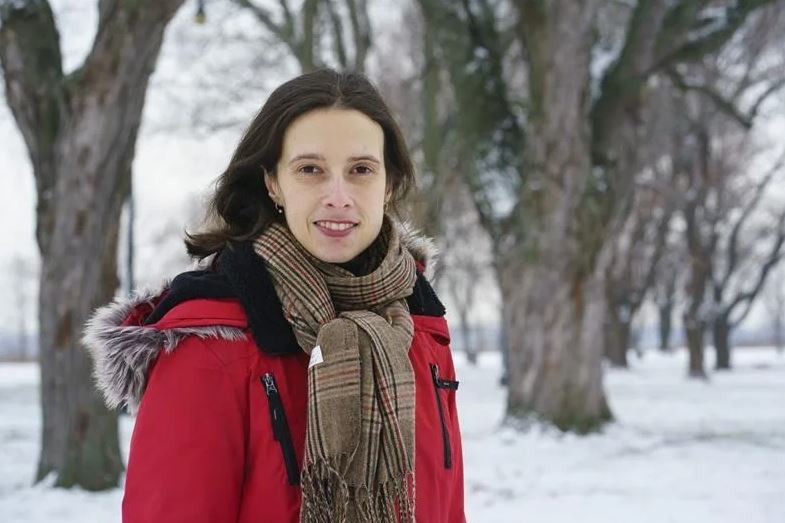 When multidisciplinary artist Audrey-Anne Bouchard started to develop her latest show “Camille,” she wanted the fusion of dance and theatre to be accessible to all — even those who can’t see.

“You don’t make the same choices when you see, versus when you don’t,” says Bouchard, who has partial vision herself. “And the idea of a different language … inspired me.”

For Bouchard, the different language meant allowing people who are visually impaired to experience live dance and theatre through touch, smell and sound.

Five years later and after close to 40 performances across Quebec, Bouchard says she is proud to have contributed to making art more accessible. And her work has drawn recognition. Last month, the Montreal accessibility group AlterGo gave her its annual award, citing her work “revolutionizing the world of artistic and theatrical creation.”

“Camille” is an immersive show performed for an audience of just six people at a time. They sit directly on stage, surrounded by artists telling the story of the main character’s struggles after the departure of his childhood friend Camille.

“The idea was to take the audience on a journey,” Bouchard, 37, said in a recent interview, explaining her desire to explore a different, inclusive form of art. “It’s a multi-sensory experience, where we invite people to listen, interact with objects and smells.”

The concept, however, had to be revisited due to COVID-19 and sanitary measures. In the previous version, the performers would — in some scenes — directly dance with audience members one by one, instead of simply describing what was going on. In the latest version, the audience remains seated, and the contact with performers is through objects, such as an umbrella.

Bouchard, who progressively started to lose sight when she was 16, began exploring the concept in 2016. She said that, as she is not fully blind, she pursued her artistic approach while wearing a mask covering her eyes. “If you want to create a show for visually impaired people, you have to do it blindfolded,” she said. “You can’t create it to be seen, but to be felt.”

“Camille” made its debut in 2019. It received funding from the Canada Council for the Arts and Montreal’s Conseil des arts, allowing for the audience to experience the show for free in cultural centres across the city.

After a performance scheduled in Montreal Saturday, it will close before resuming in the spring. It is also open to people without visual impairment, but they must wear blindfolds throughout the entire performance.

Bouchard says there has been movement in Quebec toward making art more accessible, and she wants to push it even further. She is currently working on developing a second show, this time including other visually impaired artists.

“With ‘Camille’ I was the only one on the team living with a vision handicap,” she said. “It’s important for me, moving forward, to have other visually impaired artists with other experiences. That’s going to be the next challenge!”

The general manager of a group representing people with impaired vision said Quebec has recently been offering more cultural spaces that accommodate people with a disability, such as museums and movie theatres. She praised Bouchard for her inclusive show.

“I myself am a person living with a vision handicap, and I find it wonderful to notice we are starting to consider that we, visually impaired people, also like shows,” Pascale Dussault of the Regroupement des aveugles et amblyopes du Montréal métropolitain said in an interview.

Obstacles, however, remain. France Durette, a 55-year-old lover of the arts, was diagnosed with retinitis pigmentosa at the age of 25, an inherited disease that causes gradual loss of vision. “At noon or midnight, it’s the same for me because it’s always super bright for me,” Durette said, explaining it took 25 years before she completely lost her sight.

She said losing her vision has completely changed her relationship with the cultural scene, as it became harder to find accessible plays or exhibitions. When she heard of “Camille,” she said she felt taken into consideration. Durette went to a performance in August and said the immersive sensation was the highlight of her evening.

“The show offers another dimension of art. It’s not the same feeling,” she said. “You feel like you are at the place they are describing because of the different sounds and smells, like coffee, dishes. It’s so much more interesting to be directly on the stage.”

Durette said she wishes more people were interested in making art accessible for visually impaired people. She, however, said she hasn’t abandoned her desire to remain active with arts and culture.

“You can’t stop living. Losing sight doesn’t mean you’re losing your mind. You have to continue,” Durette said. “Everything takes more time, days are longer. You have to learn to live with it.”

For Bouchard, the creation of “Camille” ended up being a journey of self-discovery.

“I realized I was always reassuring people that my handicap wouldn’t affect my work,” she said. “And with ‘Camille’ it became a strength instead of an obstacle.”

This report by The Canadian Press was first published on Dec. 18, 2021.