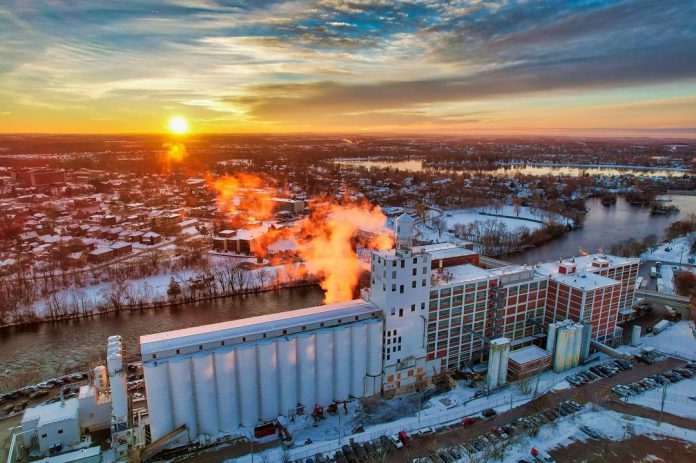 It’s something that warms the heart of anyone who has ever lived in or around downtown Peterborough: the wholesome aroma of baking oatmeal from the Quaker Oats plant on Hunter Street.

Now you’ll soon be able to enjoy the fragrance of maple and brown sugar and more from the comfort of your own home, no matter where you live.

The smell of baking oatmeal from Quaker Oats has long been the unofficial scent of Peterborough. We’re now making it official and sharing it with the rest of Canada.

“The smell of baking oatmeal from Quaker Oats has long been the unofficial scent of Peterborough,” says Avril Sloof, a brand manager for PepsiCo Canada, the parent company of Quaker Oats. “We’re now making it official and sharing it with the rest of Canada.”

The announcement of the plug-in air freshener follows the release by Quaker Oats of a limited-edition clothing line called QUAKERborough earlier this year, celebrating the Hunter Street plant’s 120th anniversary.

Sloof says the air freshener, which plugs into an electrical outlet, will release a “subtle” scent of baking oatmeal.

“We didn’t want it to be overpowering,” Sloof explains. “We wanted it to be exactly what Peterborough residents experience when they walk out their door and catch a whiff of that wonderful scent on the breeze.”

“The Official Scent of Peterborough” plug-in air freshener will be available at all major grocery store chains across Canada by the summer.

In a technological first, the plug-in air freshener will rely on an internet connection to release its scent only when the Hunter Street plant is actually baking oatmeal. The scent released by the air freshener will match whatever product the plant is making at the time — including kawarthaNOW’s personal favourite, maple and brown sugar.

No matter where you live in Canada, you’ll have the same olfactory experience, and at the same time, as Peterborough residents do.

“Our product engineers worked incredibly hard to make this happen,” she says. “No matter where you live in Canada, you’ll have the same olfactory experience, and at the same time, as Peterborough residents do.”

Sloof says the plug-in air freshener will provide an added benefit for locals when the hot weather arrives.

“When you close your windows and turn on the air conditioner, you miss out on the aroma from the Quaker Oats plant,” she says. “Our plug-in air freshener means you can continue to enjoy the small of baking oatmeal whatever the weather.”

Not only will former Peterborough residents now be able to enjoy the smell of home once again but, according to Sloof, all Canadians will have a chance to share the experience for the very first time — and possibly people around the globe.

“It’s about time Peterborough takes its rightful place on the international scent map,” she adds.