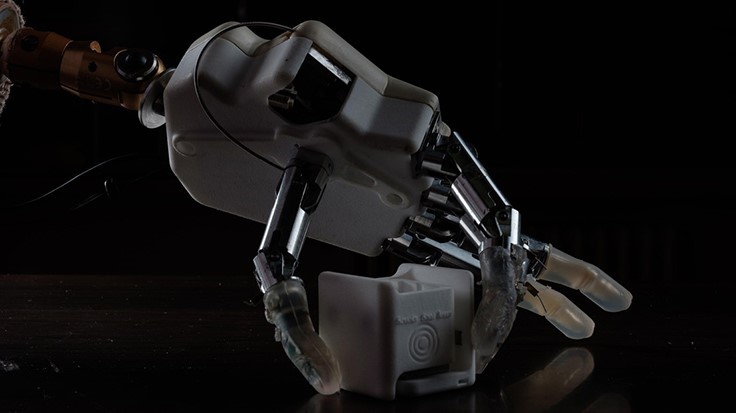 Prosthetic restores the sense of the hand | todays medical developments

The scientists managed to reproduce the feeling of proprioception, which is our brain’s capacity to instantly and accurately sense the position of our limbs during and after movement — even in the dark or with our eyes closed.

The new device allows patients to reach out for an object on a table and to ascertain an item’s consistency, shape, position and size without having to look at it. The prosthesishas been successfully tested on several patients and works by stimulating the nerves in the amputee’s stump. The nerves can then provide sensory feedback to the patients in real time – almost like they do in a natural hand.

The findings have been published in the journal Science Robotics. They are the result of ten years of scientific research coordinated by Silvestro Micera, a professor of bioengineering at EPFL’School of Engineering and the Sant’Anna School of Advanced Studies, and Paolo Maria Rossini, director of neuroscience at the A. Gemelli University Polyclinic in Rome.

Sensory feedback
Current myoelectric prostheses allow amputees to regain voluntary motor control of their artificial limb by exploiting residual muscle function in the forearm. However, the lack of any sensory feedback means that patients have to rely heavily on visual cues. This can prevent them from feeling that their artificial limb is part of their body and make it more unnatural to use.

Recently, a number of research groups have managed to provide tactile feedback in amputees, leading to improved function and prosthesis embodiment. But this latest study has taken things one step further.

“Our study shows that sensory substitution based on intraneural stimulation can deliver both position feedback and tactile feedback simultaneously and in real time,” Micera explains. “The brain has no problem combining this information, and patients can process both types in real time with excellent results.”

Intraneural stimulation re-establishes the flow of external information using electric pulses sent by electrodes inserted directly into the amputee’s stump. Patients then have to undergo training to gradually learn how to translate those pulses into proprioceptive and tactile sensations.

This technique enabled two amputees to regain high proprioceptive acuity, with results comparable to those obtained in healthy subjects. The simultaneous delivery of position information and tactile feedback allowed the two amputees to determine the size and shape of four objects with a high level of accuracy (75.5%).

From the published study
For the functional tasks, participants were fitted with a custom bidirectional research prosthesis, allowing control of hand opening and closing by processing sEMG signals and providing sensory feedback by means of electrical stimulation of the peripheral nerves. A robotic hand with tension force sensors integrated within each digit (IH2 Azzurra, Prensilia, Italy) was controlled using a custom, multithreaded C++ software running on a Raspberry Pi 3 singleboard computer (Raspberry Pi Foundation, UK). A recording and stimulating device (Neural Interface Processor, Ripple LLC., USA) was also connected to the central single-board computer, acquiring sEMG data from two or four bipolar channels and providing stimulation outputs to the four neural electrodes. Custom-molded sockets were built with integrated screws to easily fix the robotic hand on the end. Holes were drilled to allow for the placement of sEMG electrodes on the stump.

Funding
Funding was provided by the European Commission, the Swiss National Centre of Competence in Research (NCCR Robotics), and the Bertarelli Foundation.

Source: Prosthetic restores the sense of the hand