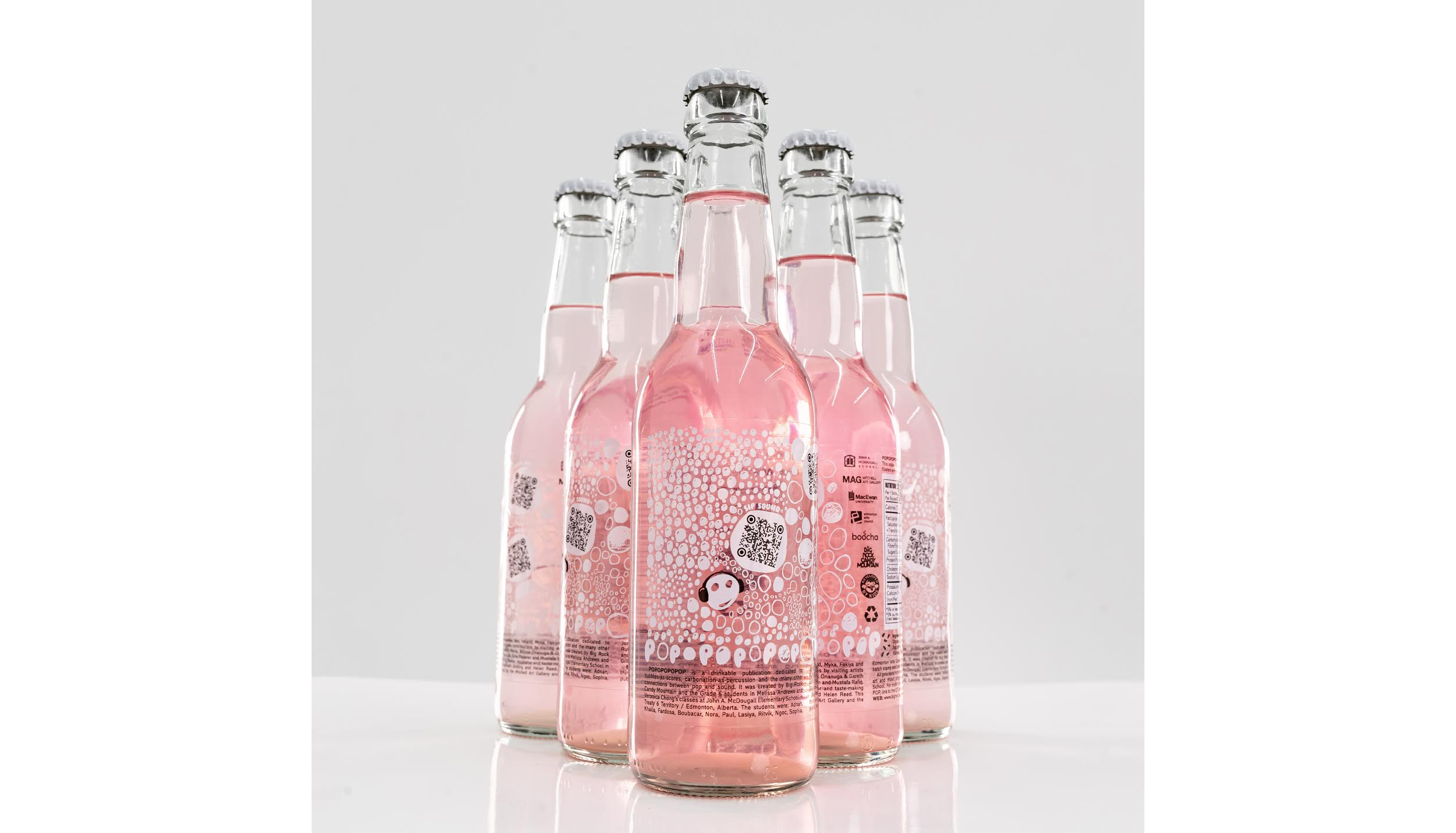 POPOPOPOPOP delivers soda with a sensory experience | The Gateway

This soda is a sensory experience made in collaboration with sixth grade students and local artists.

POPOPOPOPOP, a soda based on sound, is making its rounds in the Edmonton market right now.

The soda project was commissioned by the Mitchell Art Gallery and the Edmonton Arts Council. In addition, the soda was co-designed by sixth grade students at John A. McDougall Elementary School in Edmonton and local artists. The team worked with Boocha Beverage Inc., which is a kombucha manufacturer in Edmonton.

POPOPOPOPOP is described as a “drinkable publication,” referring to the various musical connections made during the research of the project. Workshops were attended by the students where they would do activities such as listening for quiet noises, making links to auditory experiences through a visual score, and even listening for bubbles through a hydrophone — a device that records underwater sounds.

After this, the students cooperated with local artists to create sound and graphic files. These files are accessible via the QR code on the soda bottles. Included is a “bubble score,” which took students’ drawings of bubbles and animated them with the help of Chhaya Naran, and turned into a score by Mustafa Rafiq. The QR code also leads to a “popcast,” a documentation of the progress mixed with the students’ self-produced audio compositions, “sip sounds” which is a rendition of the students’ soda sounds by Biboye Onanuga and Gareth Gilliland, and “mmboobles” which is a track played over Zoom for the students by Charmaine Lee.

One of the artists involved in the creation and facilitation of the POPOPOPOPOP soda is Hannah Jickling. Jickling is one half of Big Rock Candy Mountain, which she facilitates with partner Helen Reed. Big Rock Candy Mountain is a platform for making candy and junk food that would otherwise be marketed towards children by big corporations.

Jickling described one of the unique experiences with POPOPOPOPOP being the opportunity to work with local artists.

“We brought in several Edmonton-based artists and musicians to [do] workshops with the students,” she said. “One of them is actually a U of A grad — Gina Pasaran, so that was a really cool part of the project, having other people contribute their expertise to the project. That happened in the forms of online hanging out, doing workshops, and [doing] artists talks for the students.”

Along with the opportunity to work with local artists and musicians, Jickling explained that another highlight working on the soda project was seeing the reflections of the students and what they had learned.

“I think what really came through in our work with them was some of their incredible reflections on the project — thinking about why you would work with a smaller soda manufacturer as opposed to someone really big like Coke or Pepsi, and what the benefits of working locally are.”

The students were taught to use an online editing and recording program by the guest musicians, and their individual sounds showcased how “their personalities really came through.” Bubble designs on the bottle were also derived from a student’s bubble drawings.

Colour in the soda comes from an all-natural food colouring agent. Its pink hue is attributed to the inclusion of sapphire wolfberries in the drink. As for the flavour, Jickling wanted to keep it more ambiguous.

“It’s kind of a mystery but there is a visual hint next to the ingredient list. There’s some black seeds, and if you look at the colour of the soda behind it, it might give you a hint,” she said.

Jickling hopes that while drinking the soda, people will also view and listen to the files via the QR code. Drinking is about more than taste — it’s an experience.

“I think the function of the bottle, the packaging, [and] the story of the project is just to think about other sensory experiences with soda — the flavour, the way it feels in our mouth, and the way it makes us feel,” Jickling explained.

The soda is running low right now, but it is still available at Tix on the Square, Hideout Distro, Coffee Bureau, Latitude 53, and Habesha Market on Thursdays. If you miss it, it will likely also be available at Griffin’s Landing at MacEwan University in the fall. Try this “drinkable publication” and savour a perfect summer drink in the last dregs of the season!

Source: POPOPOPOPOP delivers soda with a sensory experience – The Gateway