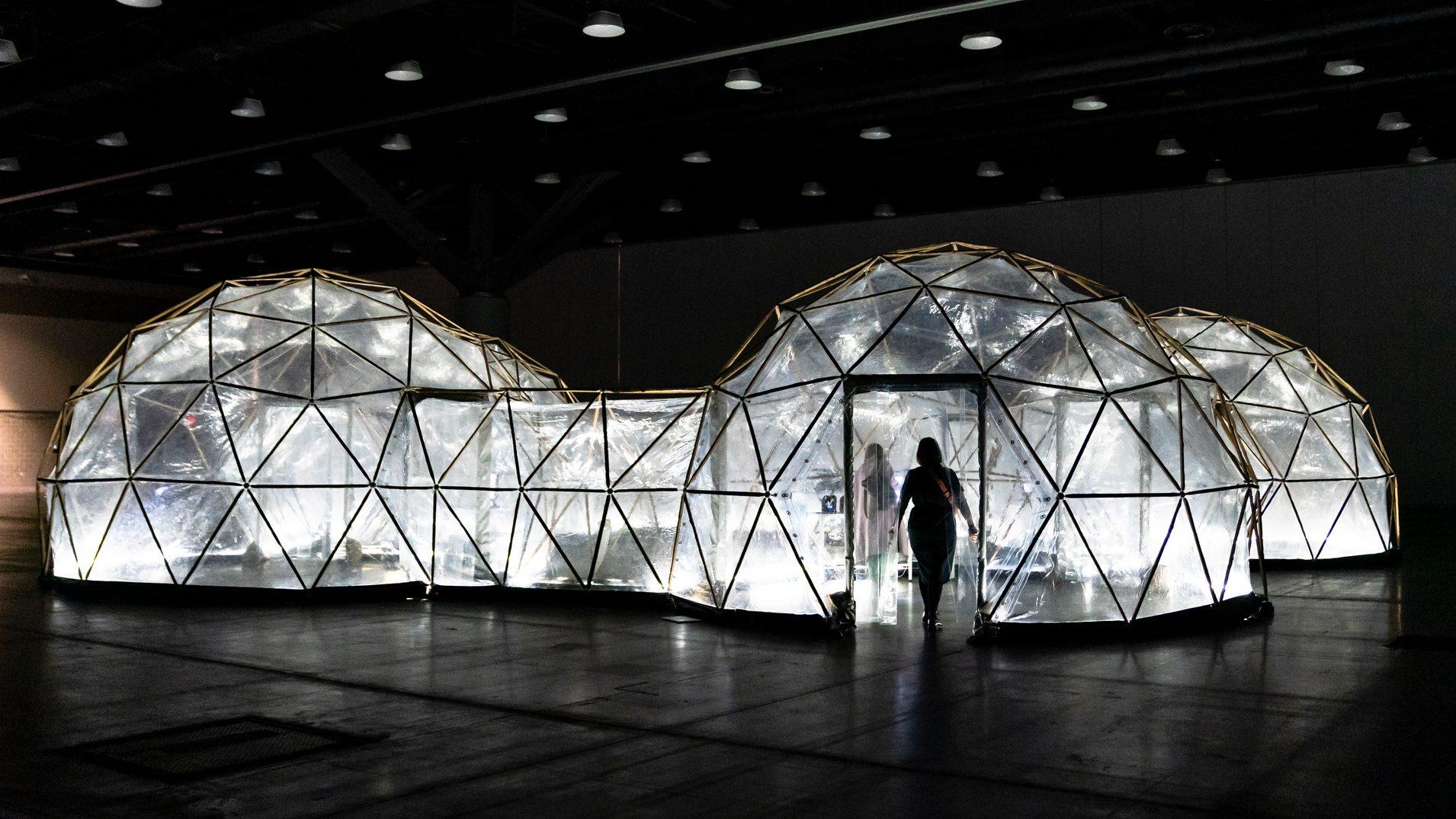 British artist Michael Pinsky installed a different kind of horror house in the bowels of the Vancouver Convention Center during the TED conference last week. The so-called “Pollution Pods” are a circuit of five geodesic domes designed to give visitors the chilling experience of breathing in the air of some of the world’s most polluted cities. “I came up with this to see whether art can change people’s perceptions about climate change,” explained Pinsky.

He reassured visitors that his art installation is a simulation, and the air inside is safe to breathe. “When you have carbon dioxide and nitric dioxide in a confined place, you tend to kill people. That doesn’t happen here,” Pinsky says. “Out there, yes, but not here.”

Using fog machines, humidifiers and compressors, and room scents—all enclosed in plastic domes—Pinsky recreates the stifling atmospheric conditions of London, New Delhi, Beijing, and São Paulo, contrasted with the comparatively clean-smelling air on the island of Tautra in Norway.

In the tradition of Olafur Eliasson’s “Ice Watch” and Daan Roosegaarde’s “Smog Free Ring,” Pinsky’s Pollution Pods serve as a compelling visualization of the invisible killers—particulate matter and chemicals—permeating the atmosphere of our biggest cities.

Air pollution and climate change aren’t the same, but they’re both caused in large part by the extraction and burning of fossil fuels, explained Pinsky. The immediacy of these crises may feel abstract to those living privileged lives around the world, so Pinsky’s work makes it personal, using as his material an element that’s familiar to everyone—the air we breathe. “One thing we realized is that people don’t change behavior unless something affects their everyday life,” he says. “The trouble with climate change is that things are happening, but it’s not affecting people in the West on an everyday basis.”

The scents enclosed in each dome are the Pollution Pods’ most evocative element. Working with perfumers living in each of the cities represented, Pinsky heightens the olfactory dimensions of the prevalent pollutants in each location. London’s pungent rubbery aroma, for example, is caused by polluting diesel engines. Many Londoners—and the city’s public bus system—changed from petrol to diesel vehicles a decade ago, believing that it was kinder to the environment. The UK government in 2015 estimated that (pdf)nitrogen oxides emitted by diesel engines kill up to 23,500 UK citizens prematurely each year.

São Paulo’s fruity, vinegary smell comes from the ethanol-blend fuel used in most vehicles in Brazil. Producing corn-based fuel has been found to cause significant levels of air pollution and increase the prices of the food staple. A 2007 study found that switching to ethanol fuel may do little to reduce overall pollution from engines.

After Vancouver, Pinsky plans to take the Pollution Pods to the UK, Australia and to New York City for the UN General Assembly. He says that some organizers have tried to convince him not to name particular cities, for fear of embarrassing dignitaries from those polluted places. But the specific place names are essential, argues Pinsky. “It doesn’t work that way, it doesn’t rest in your mind…You need to name the actual places, I think.”

Pinsky, who grew up in rural Scotland, says that he has been more attuned to the smell of cities since he started developing Pollution Pods for Noway’s 2017 Climart festival, and he has gotten better at the difficult task of describing smell. “My articulation of smell is better now, after this project,” he said.

So what city smells the best? “No city,” Pinsky said. “You have to go on top of a mountains for that.”