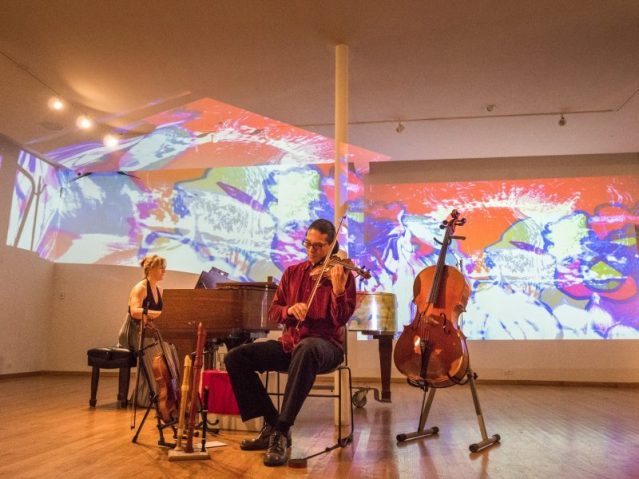 Jeff Yang’s passion project In The Realm of Senses presented Pictures at An Exhibition: Ukraine this past Friday evening at the Ukrainian Institute of Modern Art in Ukrainian Village. The unique sensory concert featured live music from two musicians (Jeff Yang and Lyudmila Lakisova) on eight different instruments paired with various modalities of art to stimulate all the senses. The pieces featured during the first half of the program were by rarely heard Ukrainian-born composers Sergei Borkiewiecz, Sergei Prokofiev and Myroslav Skoryk.
The second half of the show included a more tantalizing experience. During intermission, audience members were encouraged to leave their seats and refill their glasses with complimentary libations donated by Band of Bohemia and Maplewood Breweries. Plates topped with four decadent treats from Botanibites, Chocolat Uzma, Hewn Bread, and Mango Pickle embodied another aspect of the senses. Yang made it clear before he resumed the performance that these small bites were meant to be consumed during certain songs. The sweet creations mingled with the musical pieces was reminiscent of the Pixar film Ratatouille. The live music was paired to not only these gastronomic creations, but animated art by Galina Shevchenko and perfumery by the esteemed master French perfumer Christophe Laudamiel. The animations were from the five original lithographs by John Gaudette. The music of Mussorgsky was based on the lost paintings by Viktor Hartmann. This part of the performance was quite trippy, yet enticing when paired with the music. 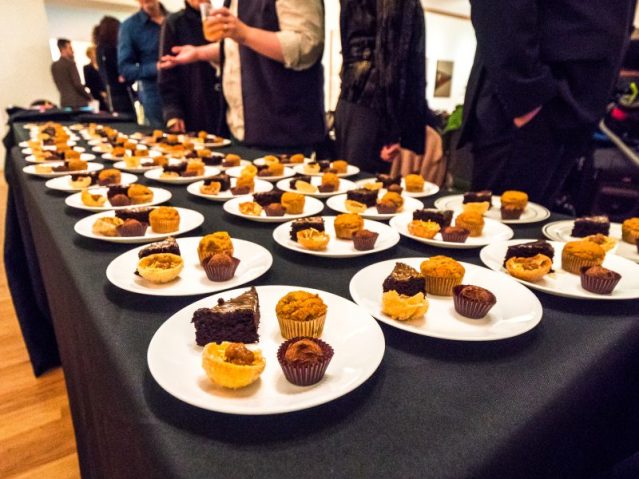 The event ran just under two hours and was engaging from start to finish. I would highly recommend catching an In the Realm of Senses performance if you get the chance. The experience of beauty through the engagement of our sense of sound, smell, sight and taste blended together in one cohesive performance piece was unparalleled. Each artist represented one sense during the night at the Ukrainian Institute of Modern Art, yet the final product was much more than a mere sum of parts. Jeff Yang hit the nail on the head with this exhibit. This is not surprising given his musical and creative background—he is one of the most versatile string players in Chicago and was even a long time member of the band Mannheim Steamroller. Although the musical pieces only contained one piece by a living composer, the room was filled with life last Friday night.

Source: Pictures at an Exhibition—a Multi-Sensory Performance That’s More Than the Sum of Its Parts | Third Coast Review