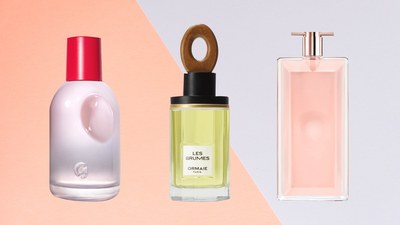 Perfume Bottle Designers Reveal What Goes Into Their Creations | Allure

Imagine being asked to capture a landscape with so much color, texture, and detail that the picture springs to life on canvas, transporting even the most casual observer to that exact location and moment in time. The only catch (and it’s a big one) is that you can’t see the place you’re supposed to illustrate, and no one is able to describe it to you, either. That’s because technically, it doesn’t exist yet.

Welcome to the enigmatic world of fragrance bottle design.

It’s true that once you peel away the layers of mystery and artistry, perfume bottles serve a pretty basic function. Yes, they’re lovely to behold — their crystal necks and flower-bulb stoppers like perfect glass gardens. But at the end of the day, they’re designed to hold and dispense liquid with the same efficiency as any humble household cleaner. No wonder most of us assume that the real stars of the fragrance universe are the precious ingredients inside the bottle — those powdery florals and heavy-lidded ouds that conjure memories and emotions and daydreams. But just like so many objects rendered in glass, perfume bottles offer us a slightly distorted — if not totally reverse — version of reality.

“Sometimes we have to design the bottle even before the fragrance has been made,” says Fabien Baron, the legendary designer, photographer, and filmmaker behind some of the most successful fragrance launches in history, including Calvin Klein CK One. “The designers are actually inspiring the perfumers and giving them ideas.”

It may sound contrary to the way we imagine things are done behind the scenes, but this outside-in approach is the industry standard — and has been for decades. “In 1992, Jean-Claude Ellena told me he wanted to play with a green tea note for Bulgari Eau Parfumée au Thé Vert,” says Thierry De Baschmakoff, the Grasse-born designer who’s been developing packaging for top fashion and beauty brands for more than 25 years. “That was the first and the last time I actually knew what was going inside the bottle I was making.” As with everything that relates to fragrance, the key factor dictating the design process is time. Because it takes longer to build a bottle than to build a perfume, says De Baschmakoff, the former usually precedes the latter — and ultimately gives it shape.

The idea of working from a blank canvas may have its artistic appeal, but it doesn’t necessarily translate into creative freedom for bottle designers. If anything, it requires them to be even more thoughtful and deliberate in their approach. “I can design you a beautiful bottle, but there are billions of beautiful bottles out there,” says Baron. “That isn’t the point. It’s about matching the history and the values and the psyche of the brand to a cultural moment and then aligning all of those elements into one clear message… The story is the most important thing.”

Without a cohesive story to translate the world of a fragrance, says Baron, the entire project falls apart at the seams. “Even if the perfume is amazing, people won’t buy it if they don’t understand it. They need to feel a connection or it just doesn’t work.”

It might not seem logical to think that a perfume’s image is more important than its smell, but then again, the fragrance industry hasn’t grown into a multibillion-dollar affair by selling us cold, hard facts. Just consider: Chanel No. 5 rarely performs well in blind smell tests; our modern sensibilities are accustomed to lighter, airier compositions. But housed in its classic glass flacon, the fragrance is a global best seller. “People love the story and what it stands for,” says Baron of the full, iconic package. Psychologically (and maybe even biologically), this makes sense. Think of how we grow to appreciate the little quirks and imperfections in the people we fall in love with. The stronger our emotional connection, the more beauty we see.

That’s why the art of perfume bottle design has acquired new weight in an era where consumers often go online to experience fragrance instead of walking up to a store counter. Without the benefit of touch, human interaction, and the alchemy of scent on skin, people need something else to engage their senses and ignite their interest. And more often than not, the perfume bottle is what fills that virtual space. “It’s the first form of communication and the first form of contact that people have with the scent,” says De Baschmakoff. “So of course it has to resonate.”

The trick is to design a bottle that resonates across the board — no small feat. A perfume can mean anything to anyone. Nina Ricci L’Air du Temps reminds me of my mother; it reminds my mother of balmy summer nights in Austria. But the bottle itself is a fixed quantity. It feels the same in our hands, it looks the same on our shelf, and it releases the same nimbus cloud of scent. It connects us.

The story behind a perfume bottle is just as heady and complex as the fragrance inside. Below, we asked designers who have dreamed up some of our favorite bottles in recent years to distill their creative vision.