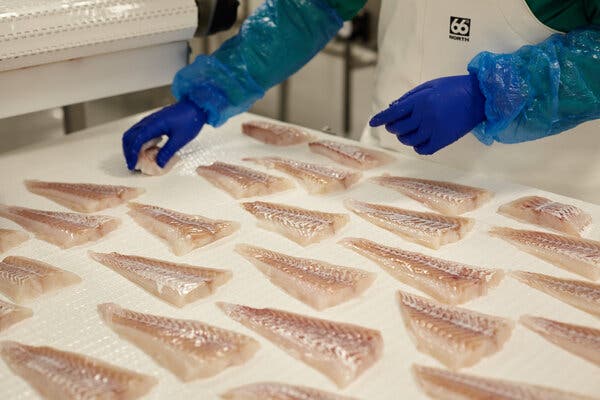 Researchers in Iceland have identified a new mutant superpower — but the genetic trait probably won’t be granting anyone admission to the X-Men.

A small contingent of the world’s population carries a mutation that makes them immune to the odious funk that wafts off fish, according to a study of some 11,000 people published Thursday in the journal Current Biology. The trait is rare, but potent: When faced with a synthetic odor that would put many people off their lunch, some test subjects smelled only the pleasant aroma of caramel, potato or rose.

The vast majority of people aren’t so lucky. Nearly 98 percent of Icelanders, the research said, are probably as put off by the scent as you’d expect. The mutation is thought to be even rarer in populations in other countries.

“I can assure you I do not have this mutation,” said Dr. Kári Stefánsson, a neurologist and the study’s senior author. “I tend to get nauseated when I get close to fish that is not completely fresh.”

Dr. Stefánsson is the founder and chief executive of deCODE genetics, a biopharmaceutical company in Iceland’s capital, Reykjavik, which has been parsing the human genome for several decades. The team’s latest caper involved a deep dive into the underappreciated sense of olfaction.

Study participants were asked to take a whiff of six Sniffin’ Sticks — pens imbued with synthetic odors resembling the recognizable scents of cinnamon, peppermint, banana, licorice, lemon and fish. They were asked to identify the smell, then rate its intensity and pleasantness.

The older the study subjects were, the more they struggled to accurately pinpoint the scents. That’s unsurprising, given that sensory functions tend to decline later in life, said Rósa Gísladóttir, the study’s lead author. But even younger people didn’t always hit the mark, she said. The lemon and banana sticks, for instance, prompted descriptions of gummy bears and other candy-sweet smells.

The reek of fish, however, was mostly recognizable and received by far the lowest pleasantness ratings among the six sticks. But a small group of people consistently tolerated or even welcomed the piscine perfume: those born with a genetic mutation that incapacitated a gene called TAAR5.

TAAR5 helps make a protein that recognizes a chemical called trimethylamine, or TMA, that is found in rotten and fermented fish and certain animal bodily fluids, including human sweat and urine.

Most people carry an intact version of TAAR5, and easily recognize the fishy fragrance as mildly repulsive — an ability that might have evolved to help our ancestors avoid spoiled food. But a small number of the Icelanders in the study carried at least one “broken” copy of the gene that appeared to render them insensitive to the scent. When asked to describe it, some even mistook it for a sugary dessert, ketchup or something floral.

“They were really not even in the right ballpark,” Dr. Gísladóttir said.

A blunted sense for bad-smelling fish might sound maladaptive. But TMA doesn’t always spell trouble, especially in Iceland, where fish features prominently on many menus. The country is famous for nose-tickling dishes like rotten shark and fermented skate, which serve up about as much odor as you may imagine.

That might be why the TAAR5 mutation appears in more than 2 percent of Icelanders, but a much smaller proportion of people in Sweden, Southern Europe and Africa, the researchers found.

“If they hadn’t looked at this population, they might not have found the variant,” said Bettina Malnic, an olfaction expert at the University of São Paulo in Brazil who was not involved in the study.

Paule Joseph, an expert in sensory science at the National Institutes of Health, noted that these genetic changes could affect, or be affected by, dietary patterns. “It would be good to see a similar study in another population and more diverse group of individuals,” Dr. Joseph said.

Dr. Stefánsson said it’s a shame he doesn’t carry the rare mutation, considering how much cod liver oil he had to swallow as a child at the behest of his mother. Still, he eventually figured out a way to escape the chore.

“I told my mother, ‘I’m not going to have another spoon unless you do it yourself,’” he recalled. “I never took cod liver oil again.”