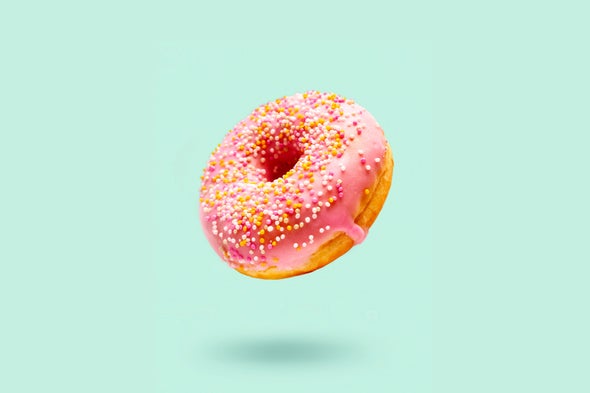 The human brain is hardwired to map our surroundings. This trait is called spatial memory—our ability to remember certain locations and where objects are in relation to one another. New findings published today in Scientific Reports suggest that one major feature of our spatial recall is efficiently locating high-calorie, energy-rich food. The study’s authors believe human spatial memory ensured that our hunter-gatherer ancestors could prioritize the location of reliable nutrition, giving them an evolutionary leg up.

In the study, researchers at Wageningen University & Research in the Netherlands observed 512 participants follow a fixed path through a room where either eight food samples or eight food-scented cotton pads were placed in different locations. When they arrived at a sample, the participants would taste the food or smell the cotton and rate how much they liked it. Four of the food samples were high-calorie, including brownies and potato chips, and the other four, including cherry tomatoes and apples, were low in calories—diet foods, you might call them.

After the taste test, the participants were asked to identify the location of each sample on a map of the room. They were nearly 30 percent more accurate at mapping the high-calorie samples versus the low-calorie ones, regardless of how much they liked those foods or odors. They were also 243 percent more accurate when presented with actual foods, as opposed to the food scents.

“Our main takeaway message is that human minds seem to be designed for efficiently locating high-calorie foods in our environment,” says Rachelle de Vries, a Ph.D. candidate in human nutrition and health at Wageningen University and lead author of the new paper. De Vries feels her team’s findings support the idea that locating valuable caloric resources was an important and regularly occurring problem for early humans weathering the climate shifts of the Pleistocene epoch. “Those with a better memory for where and when high-calorie food resources would be available were likely to have a survival—or fitness—advantage,” she explains.

“This looks like a nice piece of work,” says James Nairne, a cognitive psychology professor at Purdue University, who was not involved in the new research. “Memory evolved so that we can remember things that aid our survival or reproduction—hence, it’s not surprising that we remember fitness-relevant information particularly well, [including] high caloric content.”

We tend to think of primates such as ourselves as having lost the acute sense of smell seen in many other mammals in favor of sharp eyesight. And to a large degree, we humans have developed that way. But the new findings support the notion that our sniffer is not altogether terrible: “These results suggest that human minds continue to house a cognitive system optimized for energy‐efficient foraging within erratic food habitats of the past, and highlight the often underestimated capabilities of the human olfactory sense,” the authors wrote.

One drawback of our spatial skills, as they relate to sustenance, is our modern taste for junk food. With a life span of not much more than 30—as was the case for humans until relatively recently—chronic diseases such as diabetes were not a concern for our ancestors. If you came across a rich grove of fruit trees, you consumed all the sugar you could to help ensure your survival. Now our taste for sweets and fats contributes to a global obesity epidemic and has us reaching for candy over kale. “In a way, our minds (and bodies) may be mismatched to our current ‘obesogenic’ food-rich circumstances,” de Vries says. “We have reason to suspect that the high-calorie spatial memory bias could stimulate people to choose high-calorie foods by making high-calorie options easier or more convenient to find and obtain.”

“We’re more likely to remember sweet things, which was a real plus for most of our evolutionary history,” Nairne adds. “But this is problematic in today’s world…. We’re still walking around with Stone Age brains.”

Source: Our Brain Is Better at Remembering Where to Find Brownies Than Cherry Tomatoes – Scientific American