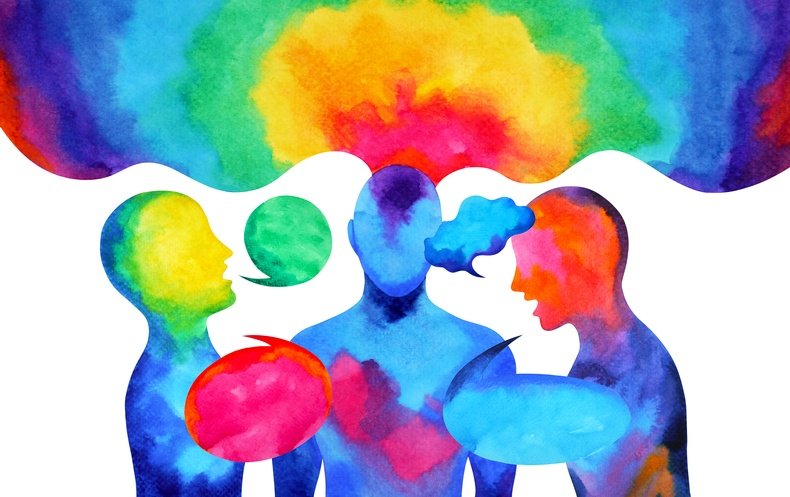 Our Language Affects What We See | Scientific American

Does the language you speak influence how you think? This is the question behind the famous linguistic relativity hypothesis, that the grammar or vocabulary of a language imposes on its speakers a particular way of thinking about the world.

The strongest form of the hypothesis is that language determines thought. This version has been rejected by most scholars. A weak form is now thought to be obviously true, which is that if one language has a specific vocabulary item for a concept but another language does not, then speaking about the concept may happen more frequently or more easily. For example, if someone explained to you, an English speaker, the meaning for the German term Schadenfreude, you could recognize the concept, but you may not have used the concept as regularly as a comparable German speaker.

Scholars are now interested in whether having a vocabulary item for a concept influences thought in domains far from language, such as visual perception. Consider the case of the “Russian blues.” While English has a single word for blue, Russian has two words, goluboy for light blue and siniy for dark blue. These are considered “basic level” terms, like green and purple, since no adjective is needed to distinguish them. Lera Boroditsky and her colleagues displayed two shades of blue on a computer screen and asked Russian speakers to determine, as quickly as possible, whether the two blue colors were different from each other or the same as each other. The fastest discriminations were when the displayed colors were goluboy and siniy, rather than two shades of goluboy or two shades of siniy. The reaction time advantage for lexically distinct blue colors was strongest when the blue hues were perceptually similar.

To determine if words were being automatically (and perhaps unconsciously) activated, the researchers added the following twist: they asked their Russian participants to perform a verbal task at the same time as making their perceptual discrimination. This condition eliminated the reaction time advantage of contrasting goluboy and siniy. However, a nonverbal task (a spatial task) could be done at the same time while retaining the goluboy/siniy advantage. The dual task variants indicated that the task of discriminating color patches was aided by silent activation of verbal categories. English speakers tested on the identical discrimination tasks showed no advantage for the light blue / dark blue trials.

Recently the Russian Blues have been used again to investigate how language influences thought. In the journal Psychological Science,  Martin Maier and Rasha Abdel Rahman investigated whether the color distinction in the “Russian Blues” would help the brain become consciously aware of a stimulus which might otherwise go unnoticed. Would salience help a light blue color, or a dark blue color be noticed (i.e., enter conscious awareness) in a situation in which attention is overloaded and not all stimuli can be noticed?

The task selected to investigate this is the “attentional blink.” This is an experimental paradigm frequently used to test whether a stimuli is consciously noticed. Research participants are asked to monitor a sequence of stimuli, displayed at high speeds (typically at least 10 per second), and to press a button every time they see a certain item. The searched-for-item can be a letter amidst a sequence of numbers; or that target can be, for example, an emotion word of in a sequence neutral words. Participants are very good at detecting the first target they see, but if a second target follows immediately after the first, or with a lag of 2-3 items, the second target can be missed. It is as if the brain’s attentional system “blinked.” The reason for the missed item can be understood intuitively: the brain was busy processing the first target and didn’t have attentional resources to spare to detect the second target.

In the decades since it was discovered, the attentional blink has been used in myriad ways to document what stimuli have an advantage in capturing attention. For example, imagine that you are asked to monitor for instances of proper names in a stream of rapidly displayed nouns. You do not miss your own name even if it occurs after a prior target. Researchers conclude that the salience of your own name protects it from the attentional blink.

Would the salience of a blue color contrast, using the Russian Blues, protect a stimulus from the attentional blink? The authors tested whether colored triangles could be detected more easily when the triangles were made visually salient by being positioned against a contrasting color. For example, a dark green color against a light green background is harder to see than a dark green color against a dark blue background. Green against blue is easier to see because of the strong color contrast between dark blue and dark green provided by linguistic categorization. What if the colors were goluboy and siniy? For Russians speakers, contrasting light and dark blue should be as salient as the contrast between dark green and dark blue (always being careful to keep perceptual similarity between contrasting stimuli comparable).

Maier and Rahman designed stimuli that were geometric shapes positioned against a light blue circle. The task of research participants was to press a button when they saw either a semi-circle or a triangle, ignoring stars, squares, diamonds and other shapes. Distractor shapes were plain grey shapes against a light blue background. As noted, the targets, which were triangles or semi-circles, were colored in ways that allowed their visual distinctiveness to be precisely varied. The least salient triangle was a light green triangle against a dark green background. This was not salient because the two green colors are in the same linguistic category. A highly salient stimulus was a green (either light or dark green) triangle against a blue (either light or dark blue) background, because the colors were in different linguistic categories. A stimulus which would also be highly salient for Russian speakers was a light or dark blue triangle positioned against a circle with the differing blue color.

The attentional blink task contained a sequence of 2-6 stimuli to be ignored (non-target shapes), then a colored semi-circle (target 1),and then, followed by a lag of either 3 or 7 items, the second target, a triangle. At lag 3, when participants’ brains were busy processing target 1, how difficult would it be to detect the green triangle?

The results supported the hypothesis that the linguistic distinction of the Russian Blues helps stimuli enter conscious awareness. That is, the least salient targets, green triangles on green backgrounds, were missed the most. The easiest target to detect was the blue/green contrast. But importantly, the contrast between goluboy (light blue) and siniy (dark blue) was a stimulus that grabbed the brain’s attention centers more than the light green / dark green contrast. Interestingly, these results were also found in a study of Greek speakers, as Greek resembles Russian in having separate lexical items for light and dark blue. German was used as the ‘control’ language since like English, it has only one word for blue. For German speakers, detection rates of the blue/blue and green/green trials were identical.

What is occurring in the brain during this visual task? The authors monitored scalp potentials during the attentional blink task. When blue contrasts were detected (meaning the blink was avoided), an event related potential occurred that is known to accompany the stage of early visual processing. This neural signature was not present for the light green / dark green stimulus, indicating that the brain processes the light blue / dark blue differently, for speakers whose language makes a lexical distinction.

The current study is an important advance in documenting how linguistic categories influence perception. Consider how this updates the original Russian Blues study, in which observers pressed a button to indicate whether two shades of blue were the same or different. In that study, it seems likely that observers silently labeled colors in order to make fast decisions. It is less likely that labeling was used during the attentional blink task, because paying attention to color is not required and indeed was irrelevant to the task. All observers had to do is try to detect a triangle in a rapid sequence of diverse shapes. It is thus a powerful finding that the incidental contrast of dark blue triangle against a light blue background helped push the triangle into conscious awareness.

What arenas of perceptual-linguistic interaction remain to be conquered? The current finding indicates that linguistic knowledge can influence perception, contradicting the traditional view that perception is processed independently from other aspects of cognition, including language. This is most famously seen in the case of visual illusions, which are mostly impervious to knowledge about the illusion. Hmm. One wonders: Could the Russian Blues be recruited in altering a visual illusion that depends on color shades?

Dr. Catherine Caldwell-Harris, Associate Professor at Boston University, directs the Psycholinguistics Laboratory in the Department of Psychological and Brain Sciences.  She brings her cognitive science training to a range of interdisciplinary questions, including cross-cultural psychology, foreign language learning, immigration, using technology to facilitate language learning in autistic children, understanding humor in another language, and why people believe or do not believe in God.

Source: Our Language Affects What We See