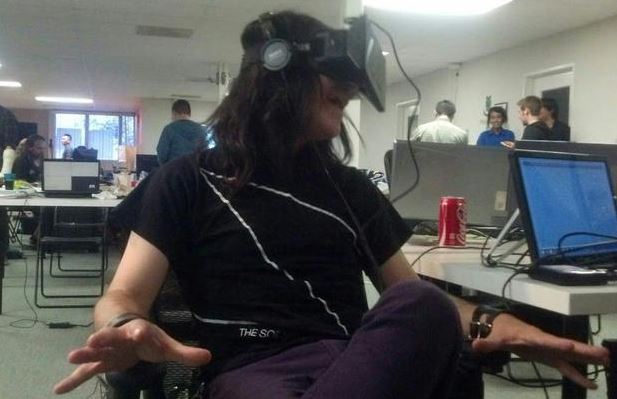 By msensory team15/10/2020No Comments
Image uploaded by Matt Terndrup
Sydney – The next buzzword is “haptic”, meaning related to the sense of touch. One of the oldest science fiction clichés is about to become unavoidable – The sense of touch in virtual reality is the new thing, so here comes the hype.

The news about VR touch is becoming a torrent of verbosity. We’re now talking about full body haptics, stable haptics, room-scale haptics and “much more”.

So what is this really all about, you ask sweetly from your bunker? Essentially it’s transferring an equivalent sense of touch to a VR object, at this point. This is another sensory interface, much like creating media for sight and sound.

The inevitable first frontier for haptic tech is of course gaming. The commercial buzz is unmistakeable and getting louder. This is big, and getting bigger on a daily basis. Haptics in some form are even coming to PlayStation controllers. Predictably enough, the theme is immersion, as though gamers weren’t immersed by definition.

(It’ll be interesting to see if lazy game developers and marketers do anything about making haptic games more reliable and less infuriating than current games. Crashes, no-saves, etc. are the usual fodder for gamers these days. Imagine a haptic VR game that doesn’t work as well.)

Haptic tech requires an electronic signal to translate into a sensed phenomenon. To feel, the nervous system has to be involved at some point. Touch involves textures, pressures, movement, and other innovative things, so it’s necessary to calibrate and scale touch responses.

Therefore, there’s a point of contact with the electronics to transfer haptic sensations. This is low-level electronic contact. The nervous system, which is far more efficient than electronics, works on microvolts. “Electronic” in this sense, excuse the pun, means actual electrons.

There’s also a somewhat arbitrary element to this tech. New room-size environments include specific physical interactions with the room, for example. This is a bit basic at this point, but the idea is to create a functional environment for VR touch. You can bump into things, touch them, and handle them. This environmental approach is critical to effective VR and practical game options.

More to the point, developmentally, and getting away from the endless game functions, this is where haptics become more than a buzzword. To create a virtual environment, a program reads the VR design elements and assigns values to them. This is utterly basic computer read/list/action program flow, and applies to every kind of electronically generated information.

OK – Now do it the other way round. Read a real environment and interact with that. It’s a lot of number crunching, but it’s easily doable in real time. Assume you have a “tricorder” type analytical software to work with. Now – What can you do with that reading? Can you interact with it remotely and safely? Can you pick up an object using a virtually generated “hand”? Not yet, but you see where this can go.

(For the record – Real operating tricorders were invented around 2005. Nice to see the tech sector’s famous epic marathon-running attention spans are working as well as usual. Imagine every home having a working tricorder to analyse weird stains, dysfunctional systems, contagious viruses, etc. Useful? Saleable? According to you, no.)

What if VR touch can be used for functional work, managing simulations within the simulations, etc. What if The SIMs was a workable media production option as VR? Some manual actions need to be rehearsed and practiced.

Just staying off the holodeck for a while longer – It’s just too simplistic to turn VR into nothing but gaming or training. VR can be used as a mock-up of anything. Planning a wedding? VR can do it all, including the flowers, the reception and finding where to put guests. Touch or not, you could create a “touchy” aesthetic.

You could also have recreational VR environments. Turn your apartment into an instant palace. Enjoy luxury, and be able to turn it off afterwards and not have to pay for the insurance. VR holidays may turn out to be pretty popular, given the pandemic and you could do video-call-level interactions with friends in exotic real locations, with touch.

The good news is that this is what VR can do, and adding touch would be a big plus. The less impressive news is that haptic VR will have to go through the usual tech hype-and-hope marketing scene. It’s stupendous, it’s colossal…and it’ll cost you a lot upfront until it goes mainstream. Tell your virtual self to bring a tent, because all this might take a while.

Source: Op-Ed: Sense of touch for VR is arriving now, with attached hype