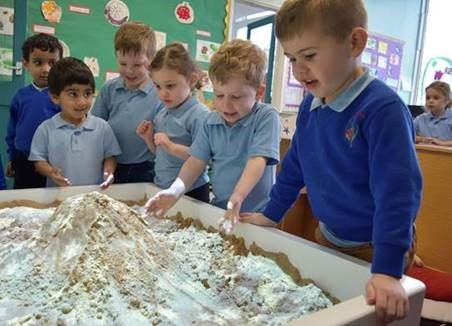 Meadowpark Nursery in Cricklade is only the second nursery to have the interactive iSandBox tech in Great Britain. It gives the little ones an immersive and interactive sensory experience as they can see topography transform, volcanoes erupt, butterflies flutter and oceans swirl right before their eyes.

Each setting for the iSandbox has audio effects to accompany the digital 3D colour and light being projected onto the sand as the children move it around and explore all the corners of the earth from their nursery rooms using the augmented reality.

Headteacher Rajvinder Kular said: “Our focus at the nursery over the past 25 years has always been to offer a loving, safe and inspirational environment for babies, toddlers and children. The iSandBox is the perfect way to celebrate our milestone in a way that truly benefits the children at the heart of our early years provision.”

Developed by Universal Terminal Systems, a Russian company, the iSandBox was created in an effort to advance the interactive technology market.

Launched in 2016, the technology has been implemented in science museums, interactive exhibits, rehabilitation centres and schools worldwide.

Meadowpark School and Nursery is an independent Private School in Cricklade for children aged three months to 11 years.