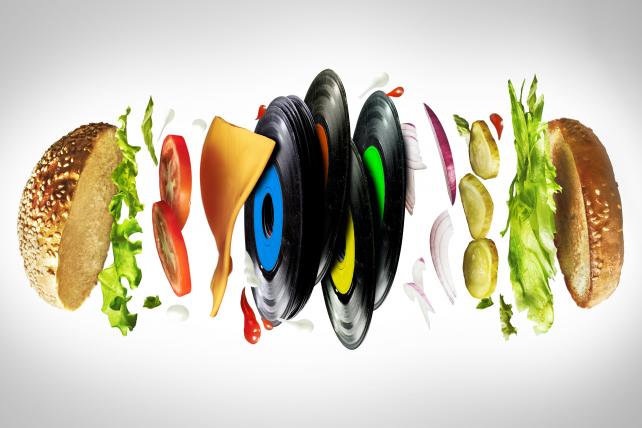 Charles Alexander frequently dines at Etch restaurant in Nashville. And while he’s in the music industry, that’s not why he wore headphones there for dinner one night. Alexander was one of dozens of people who attended a “Sounds Delicious” dinner, where each course was paired with specific music.

“Even I was surprised at how much of an impact it had on improving taste,” says Alexander, a bioinformaticist by training, who now runs a music label services company in Nashville called Systemic. “Most of the food was very flavorful. And whether that was objectively true or because of the music we heard, I’m not 100 percent sure. It enhanced my dining experience, for sure.”

Each patron got a “sonic” doggie bag to take home: a URL to download a four-song album created by a “sonic chef” while they were having dinner.

“We look beyond music simply being used as a background track in a commercial or on a playlist and look at it in terms of how it can affect consumer perception and behavior,” says Steve Keller, founder of Nashville-based audio consultancy iV, which helped put together the dinner at Etch.

Meals like these are helping audio experts, and chefs, test how sound affects people’s taste buds. Research already suggests that, in addition to creating stickier memories, certain sounds can, say, suppress one’s ability to taste, or bring out certain flavors. Which is why brands and agencies, long attuned to ways audio can help them sell products, are increasingly looking to sound to help them market beverages and food in new and unconventional ways.

“There’s more interest [in sound in marketing] than ever,” says Charles Spence, professor of experimental psychology at Oxford University, where he runs the Crossmodal Research Laboratory. “If you can name it, an agency is thinking about doing it.”

Helping spur interest: the increased adoption of voice-activated devices such as Amazon Echo and Google Home.

“If there is a literal voice from a brand talking back, what that tonality is implies a lot,” says Kristen Lueck, director of business development and partnerships at Man Made Music, a New York-based company specializing in sonic branding.

The company’s research, for instance, suggests that using music or sound to score the experience with voice assistants, rather than relying solely on lengthy verbal responses, can make them more emotionally engaging. People’s reactions to sound have an 86 percent correlation to whether they want to connect with or avoid something in the future, Lueck says.

And with the increased use of such devices, companies are beginning to think more strategically about how they use music in their ads.

“So often it’s left until you’re in the editing bay and you’re throwing something together and you need a piece of music, and then you’re a bit panicked as opposed to really thinking [what it’s] saying about the brand,” says Keller.

Clearly, music as well as sonic cues have been used in marketing for decades, from the snap-crackle-pop of Rice Krispies and the fizz of Coca-Cola to the jungle-like rainfall heard before produce is misted at the grocery store. That selling tactic got its start in the late 1970s, when Jack Corrigan, founder of the Corrigan Corp. of America, produced misting equipment to preserve vegetables at his own produce market. Because shoppers didn’t know when the mist would turn on, some would get wet.

Years later, a team including Corrigan’s son Mike developed recorded sounds to play in advance to warn customers the water was coming. Sometimes, songs like “Singin’ in the Rain” play; other grocers might opt for natural sounds like rainstorms. The sound device was sold starting in the mid-1990s and is now sold by Corrigan Corp. under the brand name Que.

“Hearing that storm makes you think ‘fresh,’ and you perceive that fruit and vegetable as much fresher than it actually is,” says Lueck.

And some brands have experimented with incorporating music into people’s at-home dining experiences simply to make them more pleasant. In 2013, Häagen-Dazs tried out a concerto app to keep busy people while their ice cream thawed. The way it worked: Someone could take a pint out of the freezer, scan a code on the package, open up the app, and watch and listen to musicians performing while their ice cream softened enough to be scooped. Häagen-Dazs declined to say why it stopped the project in 2014.

Restaurant chains have long used music to set a vibe. But there’s more to “sonic strategies,” as they’re called, than you might know. Man Made Music, which is behind sounds including the ding-ding-ding noise heard in AT&T marketing and the music that swells before content plays on HBO, has done sound work for clients such as Jack in the Box, Qdoba and Subway that includes selecting tracks with a focus on beats per minute to encourage people to move quickly while on line. And different music is used when brands want people to linger.

As experiential marketing has grown, so too have the sonic strategies. Keller, for instance, was part of the team behind “Chivas Regal Ultis Sensory Tasting Experience” events that used sensory science to help them align sound with the new product’s colors, tastes and aromas (the blend was introduced in 2016). Each of the five malts blended into Ultis had a unique soundscape that played as each malt was tasted, which were then brought together into one when Ultis was sipped.

Jozef Youssef, founder and chef patron of Kitchen Theory in London—where, based on Spence’s research, he offers the Gastrophysics Chef’s Table and corporate experiences based on gastrophysics—also worked on the Ultis events. Youssef says to think of each of the senses as being an app ticking away, constantly engaged, in the background of a mobile phone. “When we’re eating, people don’t seem to think that their sense of hearing is important but actually it’s playing a much more important role than they think,” he says. “The more senses you can engage beyond just taste and smell, the more you can draw people into the experience of your product, and that obviously creates those kind of richer and stickier memories and moments.”

The Ultis soundscapes include one that opens with a burst of “citrus,” “represented in [a] sharp attack of horns,” according to the International Sounds Award website. Another “conjures images of a playful stroll through a fruit orchard. The instrumentation is bright and lively. … Sounds of nature add to the illusion of being outdoors.” A third features “sonic textures of warmth and spice, captured by the low drone of both a cello and bagpipes.”

“Sound can have an impact on how we perceive flavor and taste, but it can also be a great way of drawing a parallel and educating people on taste using another sense,” says Youssef.

Some airlines have experimented with sonic soundscapes to enhance their meals, as well, as research has found that flying affects taste. Gastrophysics studies from Spence and others show that reduced air pressure and a lack of humidity in plane cabins can affect taste. And,”the sounds of the engines likely also plays an important role here, too, suppressing our ability to both taste and smell,” Spence wrote in an article published last year in the International Journal of Gastronomy and Food Science.

Spence, who often travels on long-haul flights to visit wineries, hotel companies, restaurants and other businesses that want to improve the experiences they offer to patrons, says that the constant hum of the engines specifically reduces people’s perceptions of salty and sweet tastes.

“Noise-cancelling headphones ought to help,” he wrote in the article.

He also suggests airlines consider offering audio or audiovisual entertainment to match the style of the food being served. He worked on such “sonic seasoning,” as he calls it, with British Airways about three years ago on a short-lived project. Passengers tuned their headsets to a channel coordinated with their order to hear soundtracks designed to match the dishes being served. Scottish salmon goes well with music by Scottish duo the Proclaimers, Spence says, while a dark chocolate dessert with bitter taste notes syncs with a low-pitched Pavarotti track.

Finnair is currently playing with soundscapes on certain flights from China to Europe using sounds one of its signature chefs, Steven Liu, recorded on a trip to Nordic countries. For example, a sweet corn and chicken soup with coriander oil is meant to be eaten while bubbling sounds “boost freshness and harmonic frequencies that emphasize sweet tastes,” the airline says.

Restaurants that are putting more emphasis on their soundtracks—aiming to create the right mood rather than just muffling the conversations of diners and other background noise—include renowned Los Angeles restaurant Vespertine, where a series of seven tracks is heard before, during and after the multicourse meal.

“Music, for sure, is arguably the most important part of my creative process,” says chef Jordan Kahn.

Music is hard to miss at Vespertine, where the $250 tasting menu is currently 19 courses. Kahn says he aims “to use sound to enhance and augment the dining experience, not to distract the guest.”

The music heard at Vespertine since it opened in July comes from experimental rock band This Will Destroy You, featuring the duo of Jeremy Galindo and Christopher Royal King. Seven tracks play in different parts of the restaurant, including tracks in a minor key piped outside the entrance and in the garden, and tracks in a major key played indoors in areas including the dining room and kitchen.

“Each piece has been composed as an aural sensory element of the subject’s journey,” This Will Destroy You said in its statement about its Vespertine compositions, with “each piece corresponding to the physical space for which it was written.”

Or, as Kahn says, “the sound is not creating a background kind of vibe, it’s creating almost a movement for the experience and synthesizing kind of an atmosphere.”

While Kahn doesn’t attach a scientific component to the work, This Will Destroy You said that there is an “emotionality, or ‘feeling tone’ as it is known in depth psychology,” to each of the compositions.

Pete Wells, The New York Times restaurant critic, began his piece about Vespertine in October this way: “Was the building … breathing? It was definitely humming.”

Now Kahn is putting together ideas for “Season 2” of Vespertine, which will feature music from new artists and a new menu.

As for the relationship between food and sound, “I don’t know that I would be able to articulate what it exactly is,” says Kahn. “What I feel when I hear this music is what is created, and then for the diner to hear the same music while they consume this food creates an experience for them. It’s likely it’s going to strike them differently than it does me.” ­