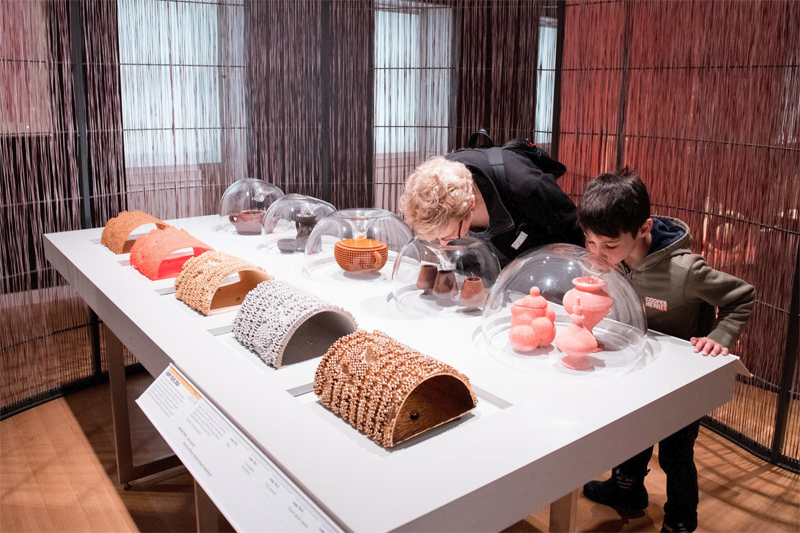 At This Museum Show, You’re Encouraged to Follow Your Nose

Small and round, Cyrano looks like a portable speaker. But instead of musical playlists, it emits odors in timed combinations — “medleys,” to borrow company-speak — with titles like “Surfside” and “Einstein.” I had never thought much about smelling Einstein before encountering Cyrano in the latest show at the Cooper Hewitt, Smithsonian Design Museum. It’s called “The Senses: Design Beyond Vision.” The exhibition features other adventures in First World consumerism. There’s hand-painted, scratch-and-sniff wallpaper (think Warhol’s patterned cows but with cherries — cherry-scented, naturally), as well as a device that projects ultrasonic sound waves to simulate the touch and feel of virtual objects. I felt what I think were meant to be champagne bubbles. Sure, bring the kids. They will bliss out stroking a wavy, fur-lined installation that makes music as you rub it.

But fun and games aside, there’s a serious, timely and big idea here. Since cave-dwelling days, humans have relied on sight more than any other sense. We apparently have the same number of genes for detecting smell as other primates, but half of them stopped functioning millions of years ago.

Vision is the most external and remote of the senses. We look at things that are apart from us, at some remove. By contrast, sounds vibrate inside us; smells inhabit us. We may not always be able to recall what some place looks like. But a smell can retrieve the memory for us. Touch, the anthropologist Ashley Montagu once wrote, is “the parent of our eyes, ears, nose and mouth,” tethering us to the world. You don’t have to read Proust to know that taste also speaks volumes. And our senses obviously commingle. Food has texture. That’s what those macadamia nuts and brown-butter wafers are doing in your mascarpone sundae. Subliminally, the tongue can even react to the sight of a polished stone. Sounds can register in your consciousness as colors, colors as tastes. (Picture the color of sour. It’s probably greenish.) That said, what the writer Italo Calvino described years ago as an “unending rainfall of images” has swelled into a deluge. Social media, smartphones and virtual reality have made us ever more “ocularcentric,” a term the Finnish designer Juhani Pallasmaa employed a generation ago to lament how dependent architects had become on digital animation.

Computer imaging tends to flatten our magnificent, multi-sensory, simultaneous and synchronic capacities of imagination by turning the design process into a passive visual manipulation, a retinal journal,” Mr. Pallasmaa argued. Designers, he said, shortchanged all the nonvisual ways we experience architecture — and through architecture,  the fullness of life. In their recent book called “Are We Human?” the architects Beatriz Colomina and Mark Wigley even correlate this approach by modern architects to modern medicine’s painkilling drugs. Numb to other senses, ocularcentric architecture cultivates alienation. What does designing more sensitively for nonvisual experience mean?

Source: At This Museum Show, You’re Encouraged to Follow Your Nose