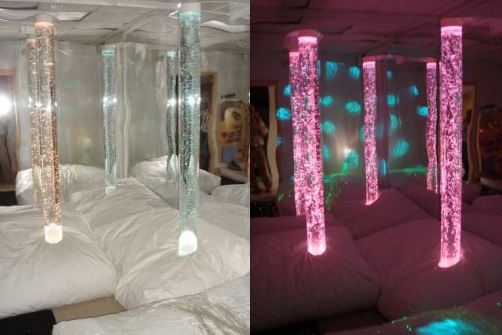 A sample of Multi Sensory Environments is seen lit with regular light and blacklighting. Users of the room, who are cognitively impaired or suffer other challenges can control various sensory elements of the room.

A room with bean-bag chairs on the floor and psychedelic light patterns reflecting off the walls might seem like a rec room circa 1968. But a stroke victim, a cerebral palsy patient or a child with developmental disabilities can all benefit from spending time in such a facility, known as a multi-sensory environment.

Wile rooms designed for sensory stimulation have been commonly used in Europe to treat people with disabilities for the last 30 years, they are still rare in North America. That is why one of the champions of multi-sensory stimulation is visiting Canada to spread the word about the unique therapy.

“The only way that we experience the world is through the senses,” Australian researcher Paul Pagliano told CTV.ca.

“A multi-sensory environment is a way of communicating with people with profound disabilities, and instead of communicating at an abstract level through language, we’re trying to communicate at a concrete level directly through the senses.”

Pagliano is being brought to Canada by the Christopher Douglas Hidden Angel Foundation, which promotes the use of multi-sensory environments across North America. Pagliano begins his cross-Canada tour in Vancouver on June 9 and wraps up in Montreal on June 18. His talks are open to the public.

A multi-sensory environment, or MSE, is meant to safely engage someone whose ability to be stimulated by the senses is impaired. The room can contain a variety of stimuli that are geared to an individual patient’s needs to promote intellectual stimulation and relaxation, or to engage the five senses through elements such as lights, music and different foods.

For example, people who need a great deal of assistance to perform basic everyday functions could benefit from a room with a lot of interactive buttons and switches, where they can see direct outcomes from their own actions.

As well, many people simply don’t know about this type of treatment.

However, multi-sensory environments can be found in private schools for kids with disabilities as well as some rehabilitation facilities such as Bloorview. The facility administers rehabilitation programs for children, both as inpatients and outpatients, who have a variety of health problems, including brain and spinal cord injuries.

Bloorview has two Snoezelen rooms, which is the Dutch-coined term for multi-sensory environments. Treatment for patients includes time in the rooms, particularly before an invasive medical procedure such has having blood taken or an IV put in.

“It’s a good way to provide relief and escape from what could be a stressful hospital experience. They are away from their families, away from siblings and peers and have gone through some life-changing event,” Mathers told CTV.ca.

“They can just go in there and have control over things, where in a medical system, unfortunately most of their control and autonomy is taken away.”

The multi-sensory environment movement began in the mid-1960s when two American psychologists developed their theory that sensory stimuli could improve development, communication and behavioural problems in people with disabilities. They set up what they called sensory cafeterias, where patients could engage with different sights, sounds, smells and textures.

In the 1970s, Dutch researchers expanded on this theory and named their multi-sensory environments Snoezelen rooms, from the Dutch words snufflen, meaning to search and explore, and doezelen, meaning to relax.

While these facilities help people with mental disabilities, they can also be used to treat patients in nursing homes, rehabilitation hospitals and schools.

Pagliano said that a step toward the movement’s growth in Canada will be the development of a governing body that sets out regulations for multi-sensory stimulation. This will not only provide guidelines for practitioners, but will also limit the potential for exploitation in an otherwise vulnerable group of people.

“And because they’re very vulnerable we need to ensure that they’re treated with dignity and respect.”

“If men have a smell it’s usually an accident.”