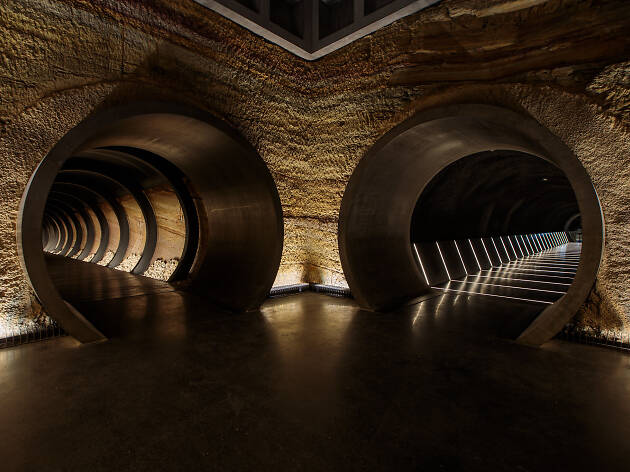 By msensory team18/06/2019No Comments
Usually when we tell you to “strap yourselves in” for an artwork, we’re speaking metaphorically. Not this time, baby.

This weekend Hobart’s MONA opened a mysterious new $27 million extension called Siloam, designed to connect the original MONA building (or rather cave, as it’s all underground) with the Pharos wing, which juts out over the water. It’s a new series of tunnels and chambers, filled with large-scale artworks by Alfredo Jaar, Ai Weiwei, Oliver Beer and Christopher Townend.

Ai Weiwei’s ‘White House’ is made from the frame of an 80-square-metre Qing Dynasty home, balanced atop reflective crystal spheres and situated spectacularly underneath a skylight. Oliver Beer’s ‘MONA Confessional’ is a massive listening tube, in which you can reveal your darkest secrets to strangers on the other side of the museum, and Christopher Townend’s ‘Requiem for Vermin’ is an audio work featuring 230 speakers throughout the tunnels, activated by movement.

But the pièce de résistance is Alfredo Jaar’s ‘The Divine Comedy’, a 40-minute experience that takes ten people at a time through three different chambers designed by the architect and artist.

We can’t show you any of it – we were not allowed to take cameras inside because they could “fall into the experience”(!) and MONA hasn’t released photos – but we can show you the entrance and tell you a little about it.

The artwork is based on Dante’s Divine Comedy, and it is divided into three chambers to reflect the three sections of Dante’s poem, journeying through hell, purgatory and heaven. But before you enter the first chamber, you’re given a series of content warnings – everything from haze to loud noises and extreme heat. And if you suffer from claustrophobia, you might want to steer clear.

Then you’re strapped into a safety harness and walk into hell. Unsurprisingly, this is where you experience that extreme heat, and also something akin to a flood. To tell you much more than that would ruin the surprise.

The second room is significantly calmer and features a gorgeously strange contribution from American performance artist Joan Jonas. The third deprives you of one of your senses in a way that’s strangely more unsettling than any of the sensory overload from the first chamber. You might just find yourself intensely aware of your own heartbeat.

It’s easy to read whatever you want into this experience, but images of apocalypse triggered by climate change mightn’t be too far from your mind as you journey through. If the end of the world is anything like this, at least the architecture is *stunning*.

The Siloam extension is open at MONA now, just in time for Dark Mofo. ‘The Divine Comedy’ costs an additional $20 to your entry fee, and you can book a session on MONA’s ‘O’ app when you’re at the museum.