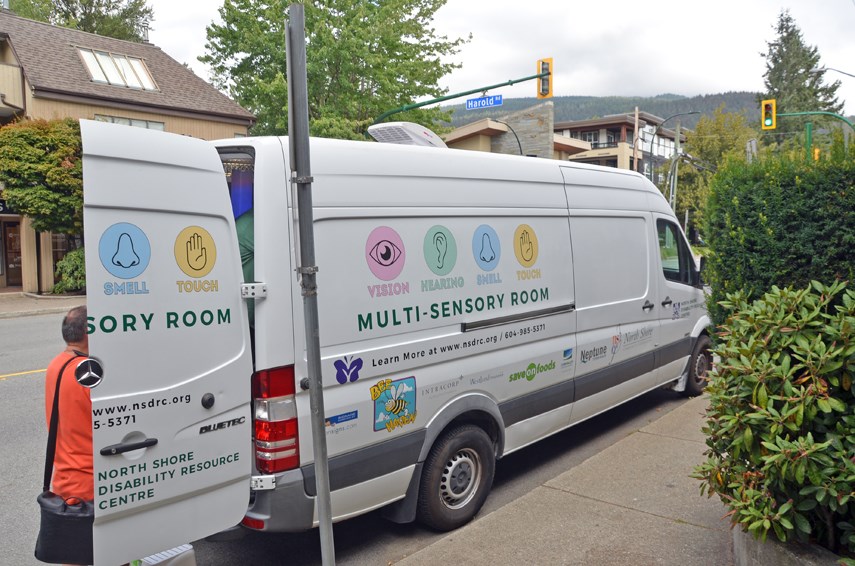 By msensory team23/07/2021No Comments
With the flick of switch, what looks like an ordinary room on four wheels has turned into an extraordinary oasis for those who need it.In an effort to stimulate the senses, inspire the soul and offer reprieve for people in the community who could use a little calming respite, a North Vancouver-based non-profit is launching its own multi-sensory room – and taking it on the road.

Following a temporary COVID hiatus, the organization is gearing up to tour its mobile multi-sensory environment out of the back of a large retrofitted van, starting this fall.

“The purpose of the room is to be able to engage an individual who might be really dealing with a lot of energy, and this helps them find calm,” said Kathleen Jessop, director of community based services at NSDRC.

First developed in the Netherlands 50 years ago, Snoezelen, or sensory rooms, provide therapy by creating a soothing and stimulating environment that engages the senses through lights, colour, music and tactile objects which provide texture and comfort.

Snoezelen rooms are typically used to provide people with autism, or other cognitive abilities, with a form of patient-led therapy that they can direct themselves.

By exposing someone to stimuli in a comfortable environment, sensory rooms are said to reduce over-stimulation as well as reduce common triggers which may cause discomfort or anxiety for adults and children who have intellectual disabilities.

The rooms are also said to be impactful for older adults living with dementia or a brain injury, as well as students with attention-deficit or hyperactivity disorder, according to Jessop.

Inside the mobile Snoezelen, NSDRC has retrofitted the van with a number of unique items, including: weighted blankets; bean bag chairs; cubes that light up in exquisite colour; a large tube that encompasses all the colours of the rainbow; a giant, interactive touchscreen; a type of mirror that houses dozens of bright LED dots that are manipulated to look like they’re stretching out into infinity; strands of ultra-violet fibre optics that feel wonderful in a user’s hands; as well as an adjustable projector that can shine a sunset scene on the walls of the room or cast a starry night on the ceiling.

Calming music can also be played while the client or user is interacting with the space, added Jessop.

NSDRC works to support North Shore residents living with disabilities along with their families. Although the mobile room will mainly serve NSDRC clients, the organization is planning to partner with local schools and seniors care homes to offer the space for certain youth and older adults who could benefit from it as well.

“All of the people that we are currently supporting will have access to this space, but we are also going to be offering this space to schools,” she said. “It’s really great for people with dementia because they can come in and we can put on music and visuals that are helpful for that senior to come back to where they should be.”

While Snoezelen rooms have increased in popularity in North America over the years –  North Shore ConneXions Society has been operating its own since 2004 – NSDRC’s mobile room is particularly novel and possibly a first of its kind, according to Jessop.

“I’ve already had calls from a daycare centre in West Van who saw it on the road,” she said.

While clients who are already supported by NSDRC will have access to the mobile sensory room starting immediately, the organization plans to reach out to other community partners, such as schools and care homes, this fall.

Relaying an example of the new Snoezelen’s success, Jessop says one non-verbal client who lives with autism recently had the opportunity to try out the space and the positive effects were almost immediate.

“When he got into the van, you could see it moving – he was very excited when he got in here. Five minutes later there was silence. Each child or individual will really gravitate toward a piece of equipment.”