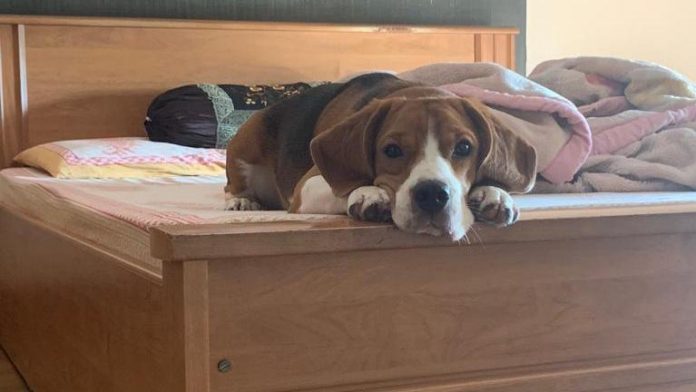 Dogs can smell everything and more. Even diseases like cancer | The Print

Dogs are able to detect cancer while it still hasn’t yet spread to other parts of the body. This means that people have a much greater chance of surviving.

Can dogs smell cancer? Yes, they can. Dogs have about 50 times the amount of smell receptors that humans do, and the part of their brain that deals with smell information, the olfactory bulb, is about 40 times bigger than ours.

Smelling is part of a dog’s natural behaviour, both to survive, and to make sense of their world. They smell everything and everyone they encounter. If a human behaved similarly, they would be viewed with suspicion and possibly locked up!

Have you ever noticed that dog noses have little slits at the sides? This is so they can exchange and mix fresh air with exhaled air. It enables them to sniff for longer, and the smells are amplified and enhanced.
How dogs save lives

Some ways that untrained dogs help their loved humans include:

There are many others ways that dogs save lives too.

When you have a dog, you get more exercise. Researchers at Michigan State University found that half of the people with dogs get around 150 hours of exercise every week. This is the recommended amount, in order to control and prevent chronic diseases.

Having a dog has benefits for cardiovascular and mental health, too. They effectively lower blood cortisol levels and activate the oxytocin system. These changes result in a lower heart rate and blood pressure. On top of this, your immune system is boosted.

Loneliness and depression are also alleviated, and people experience less anxiety and stress. More than 40 million adult Americans suffer from depression. There are many therapies and treatments available, and spending time with a pet is known to be effective. The good thing is, studies also show that having a dog is great for helping kids with anxiety.

Perceptions of different odours are vastly contrasting between humans and dogs. The smell of a rotting animal, or even cat faeces, is regarded by dogs to be life-saving nourishment essential to their survival. Does that mean they find the smell pleasant? Dogs are experts at picking out pheromone scents. This is how they find a mate. All part of the survival instinct.

Humans will be taken back to a childhood on Grandma’s knee at a mere whiff of lavender, or rose oil. This is akin to the dog experience, the difference being that we can conjure a memory through a smell, whereas dogs identify smells through their ‘survival’ filter. These are hard-wired instincts, which have ensured their ongoing existence throughout time.

Dogs are used for sniffing out rare and endangered animals, on border patrols and at airports. Illegal shipping of rare species is extremely lucrative, but exporters face stiff penalties if caught.

Detection dogs are employed and highly valued by the police, the military and wildlife biologists. They are held in the same regard as a human doing the same job.

We train dogs to help us by sniffing out the lost and the injured, bombs, drugs, prey, as well as cancer and other illnesses. They are even being used to detect passengers at Helsinki airport who have Covid-19!

How do they know when someone is unwell?

Certain smells have been attributed to disease processes for a long time. The breath of a diabetic has been likened to nail polish remover, while people with liver failure have been reported to have ‘fishy’ breath.

By the time someone is in the late stage of cancer, even humans can detect smells from the breath, the skin and the urine of the patient.

Dogs, on the other hand, are able to smell these bodily changes much earlier, and usually before any symptoms become apparent. They can also detect cancer while it is still in situ, meaning that it hasn’t yet spread to other parts of the body. This means that people have a much greater chance of surviving the disease when treated earlier.

How are dogs trained to smell cancer?

Since specific cancer odours can be found in the breath, saliva, urine and blood products of people, dogs can be trained to detect them. They are usually on a program for around 8 months, and in that time they are presented with hundreds of samples to sniff. The dogs quickly become able to distinguish a healthy sample from one containing cancer odours.

Apart from hospital-based detection of cancer, a further goal of the training program is to set up screening tests for high-risk workers. People who in the course of their working day are exposed to carcinogens or cancer-forming substances. Many workers are exposed to toxins and radiation, and despite them wearing personal protective equipment, it’s important to check their health as well.

The program hopes to develop a ‘mechanical nose’ using data collected from training sessions. If detection ‘noses’ were able to be manufactured and distributed, this would be a huge step forward in the early detection of cancer, worldwide.

Perhaps in the future, people may be able to buy their own mechanical nose to keep at home!

This article is republished from Hound101 with permission. Read the original article.

Source: Dogs can smell everything and more. Even diseases like cancer