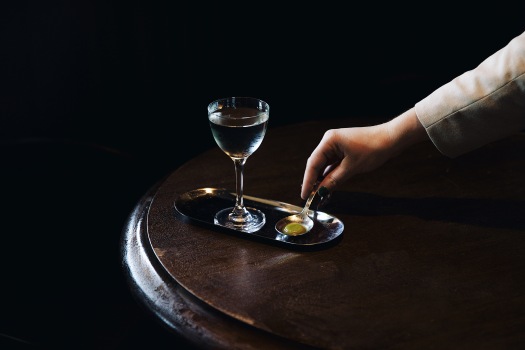 The phrase “your mind is playing tricks on you” isn’t always what you want to hear from your bartender. But tricky and sensory analysis is actually the entire point of a new pop-up experience at Death & Co.’s Denver location inside the Ramble Hotel, at 1280 25th St.

The Neuro Bar Lab, which runs through Dec. 18, is billed as a companion to David Byrne’s “Theater of the Mind,” now playing at York Street Yards. That’s because the prix fixe beverage menu seeks to “expand on some of the neuroscience ideas explored in the show and create a sensory experience by way of cocktail tasting,” according to Devon Tarby, vice president of food and beverage at Death & Co.’s parent company Gin & Luck.

Tarby worked with Colorado-based neuroscientists to learn about various disciplines such as bias, brain barriers and reward response, and then teamed up with Death & Co.’s mixologists to figure out how to showcase the concepts using liquor as the medium. The result is a six-course, interactive tasting that entices drinkers with unexpected flavors, textures and tinctures, in hopes of shattering their preconceived notions.

The libation that explores bias, for example, is a serving of three Death & Co.-style Jell-O shots. Each one is a different color and guests are asked to identify the flavors. Plot twist: They may not be as different as the colors appear to the eye.

For another cocktail, guests are asked to don a blindfold to enhance their senses of smell and taste, and see if they can guess the predominant ingredients based on a childhood memory.

Part of the thrill is not knowing what to expect, so I won’t spoil the details. But those considering going should know the Neuro Bar Lab is as esoteric a drinking experience as you can find. Maybe that’s no surprise given Death & Co.’s esteemed reputation as a leader in experimentation, however, attendees must be open-minded and willing to drink outside their usual preference.

To that point, go in ready to drink responsibility: Brandy, rum, whiskey, and vodka are all on the menu. Each person is served the equivalent for three-and-a-half cocktails, Tarby said. And the drinks are strong, so keep that Uber app handy.

Tickets for Neuro Bar Lab cost $75 and include the cocktails plus a guided experience from a bartender inside the hotel’s intimate Suite 6a space. Food is available for purchase, but not included in the ticket price. Death & Co. offers the experience Thursdays, Fridays and Saturdays from Sept. 15 through Dec. 18. Call the bar or The Ramble Hotel to book a spot.

Source: Mind trickery is on the menu at Death & Co.’s new pop-up cocktail tasting in Denver