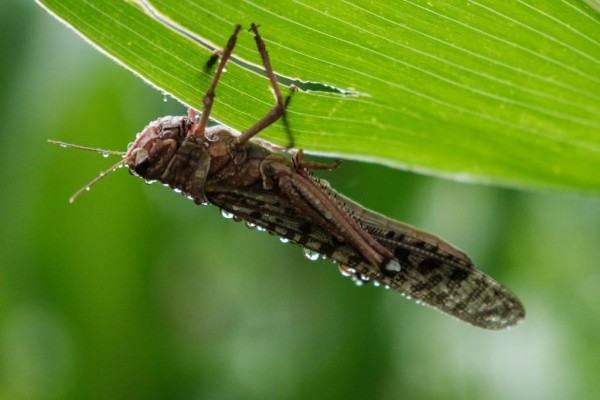 Locusts can identify and differentiate cancer cells from healthy cells through smell, according to a new study based in the United States.

These ground-breaking findings have been revealed by a research team from the Michigan State University (MSU), which utilized the power of insect olfactory neural circuits in detecting human cancer.

The team relied on the fundamental scientific premise and overwhelming evidence that certain compounds are being produced during altered metabolic processes in cancer cells.

In this context, the researchers used an insect olfactory neural circuit-based device to carry out cancer detection; with locusts being a biological component.

Related research has been conducted in the past, yet the MSU study is considered to be a new approach when it comes to addressing the detection of cancer.

Conventional medical procedures include examination of the external and internal parts of the human body to arrive at a certain cancer diagnosis.

However, using insects to smell cancer is a growing perspective in bioengineering.

The cancerous malignant tumors have been responsible for a variety of cancer types affecting the difference organs and components of the body.

Although there is still no absolute cure for cancer, modern medicine still supports early cancer detection is still one of the best mitigating efforts.

The new paper has been posted in the online journal BioRxiv on May 25; where researchers have shown that locusts not only smell the difference between cancer cells and normal cells but also distinguish varying cancer cell lines.

The MSU researchers said their work could provide the basis on how devices could use insect sensory neurons to allow the early detection of the malignant cells by relying on a cancer patient’s breath.

According to MSU Assistant Professor Debajit Saha, noses are considered state of the art due to their unique position when it comes to gas sensing, as cited by News Medical, an online medical information provider.

Saha adds that people have been engaged in working on “electronic noses” for over 15 years already.

Still, the professor pointed out that they are still not close enough in achieving what biology can do.

Cancer cells are the main content of the infamous cancer, a condition and disease where cells mutate and spread uncontrollably throughout the body.

According to the National Cancer Institute, cancer can emerge almost anywhere in the human body, which is composed of trillions of cells.

Under normal biological process, the US-based institute emphasized that human cells grow and multiple through a process called cell division, a requirement to form new cells when the body needs them.

The World Health Organization (WHO) retains its stance that cancer is still one of the leading causes of death globally, resulting in the deaths of almost 10 million people, or nearly one in six deaths, back in 2020.

Early detection can help in the treatment of cancer, even if there is still no medication that would stop the growth and spread of cancer cells.