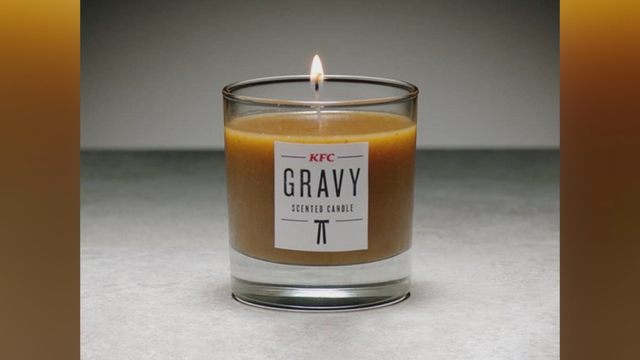 Extreme KFC fans have a chance to take home the sweet smell of gravy. (Courtesy of KFC)

If the chicken-scented yule log and herbs and spices bath bomb hasn’t filled your house with enough KFC smells to last a lifetime, the Colonel’s newest item sure will.

The fried chicken chain has announced the limited-release of a gravy-scented candle – because, why not?

According to a KFC spokesman, the “staggeringly nose stimulating” candle will “fill your home with the incredible aroma of KFC gravy.”

The savory scent was created by a brand-trusted perfumer, This is Local London reported.

“Initially the different ingredients within the gravy were split into their constituent parts and fragrances matched to each. Then the scent was built component by component in the similar ratios as KFC’s iconic gravy,” the perfumer said. “The artisanal approach to creating the candles was crucial to ensure the familiar and evocative aroma of gravy was perfectly captured.”

However, before you start clearing a space on your mantel for the saucy fragrance, the limited-edition item is only available in the U.K. for the first 230 fans who apply to own the (probably) highly-coveted KFC Gravy Candle.

KFC is making firelogs that smell like fried chicken

In sleep, we leave behind the sensory stimulation of the outside world.