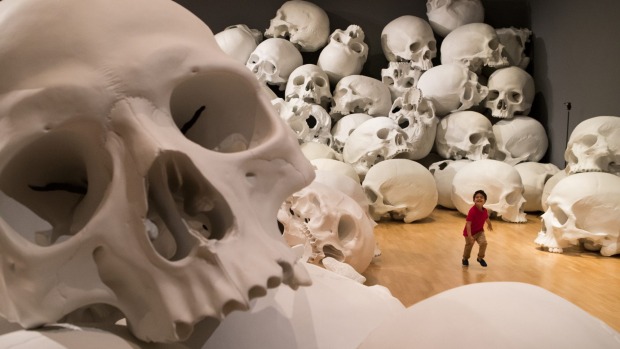 ‘It Stinks’: Exhibition touches all senses

Melbourne’s premier art gallery has cemented a reputation for big blockbuster shows from Van Gogh, Monet and Dali to Andy Warhol but the inaugural Triennial exhibition brings together 100 leading artists from 32 countries across contemporary art, design and architecture.

The centrepiece of the exhibition which opened on Friday, is 100 larger-than-life resin-cast skulls, each measuring 1.5 metres by 2 metres created by Ron Mueck in an installation called Mass.

But this exhibition is more interactive and immersive than any before it, spanning 3D printing to robotics, as well as performance, film, painting, drawing, fashion design, tapestry and sculpture with NGV director Tony Ellwood calling it a “choose your own adventure”.

There is a project by Norway ‘smell designer’ Sissel Tolaas where she recreates the scents of Melbourne on the gallery walls. Having recreated the smells of space and Word War II, Tolaas says Melbourne’s smell is unique and school kids visiting on Friday said some of the smells ‘stink’.

“There is body sweat, the river, tobacco, smells from the street, it is all about triggering the audience’s own memory,” she tells AFR Weekend.

A crowd-pleaser will be Japanese creative group teamLab who have created an immersive, mirrored room that reacts like water to visitors’ movements, creating digital whorls and ripples in their wake.

The company – which Crago has re-acquired from technology investors Netus which is now owned by Fairfax Media – has created games like The Legend of Zelda and Twilight Princess but Crago said he wanted to make “something more calm and meditative”.

“It’s meant to be an aesthetic space just for you, it’s about the life we lead in our heads, it’s very personal and everyone has a different experience,” Crago tells AFR Weekend.

Another example of the exhibition’s interactive nature is a purpose-built Japanese apartment, including Ikea kitchen and bathroom, in a new work by Yayoi Kusama which visitors can adorn with 3D flowers and stickers.

Another of of the commissioned works is by Argentinian artist Alexandra Kehayoglou who has used her family’s traditional carpet-making techniques to create a 100 square metre carpet landscape titled Santa Cruz River that documents one of Argentina’s most contested landscapes.

The exhibition also looks at political issues of walls, trade and movement. A series of passport-like photos of figures wearing African masks by Angolan artist Edson Chagas highlights migration and movement of refugees.

The NGV Architecture Commission, chosen out of a field of 100 entries, is a maze of fences made of transparent woven mesh in the garden of the gallery by Other Architects duo David Neustein and Grace Mortlock and Retallack Thompson couple Jemima Retallack and Mitchell Thompson which frames individual art works and alternatively creates corridors forcing visitors to walk along set paths.

The exhibit responded to the fact that there were now more border walls and barriers between sovereign states than any other point in history, Mr Neustein said.

“Now when we think about a wall it’s this security fence – it’s not even a permanent structure. It’s this insidious in-between space that traps people,” he said.