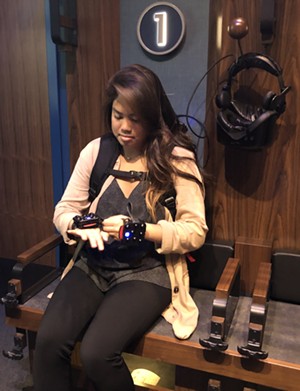 Interactive environments that act the way a traditional movie would, while also giving them control to journey within it through their senses as they see, hear, smell, feel & touch | Daily Observer

Liana Jo puts on her hand trackers just before entering the fabled Snake Temple in The Curse of the Lost Pearl, one of three virtual movies at Dreamscape in NorthPark Center.

One of the first attempts to make the movie-going experience more interactive happened way back in 1995 with a film called Mr. Payback. The experience put audiences in control of a robot named Payton Bach (get it?) designed to exact revenge on the world’s biggest jerks like bike thieves and people who park in handicapped spaces. Audiences could vote on how Payton, played by Billy Warlock, could dish out certain punishments with a three-button joystick on their seats, and the choice with the most votes would play on the screen.

Since you’ve probably never heard of Mr. Payback or such an unorthodox way to watch a film, the trend died off and became one of the most lambasted films of the year. Film critic Roger Ebert labeled it the worst film of 1995 on his movie review show Siskel & Ebert. That’s no small feat, given that its release was in the same year as stinkers like Judge Dredd starring Sylvester Stallone, Jefferson in Paris, Waterworld and Showgirls.

“We don’t want to interact with the movie,” Ebert says. “We want it to act on us. That’s why we go so we can lose ourselves in the experience. If we’re going to have to make the choices, we should be paid instead of the writers.”

He called interactive film “dead as a doornail” but noted that as for virtual reality, “the jury’s still out.”

Then along comes Dreamscape, a virtual reality movie experience that bridges the gap between making an interactive movie that can make an audience feel part of the scene without taking away the magical effect of film-watching. The virtual reality experience started with its flagship store in Los Angeles’ Century City in December 2018 and opened its second location in the NorthPark Center in Dallas on Thursday.

Dreamscape takes an audience of up to six people at once and puts them in interactive environments that act the way a traditional movie would, while also giving them control to journey within it through their senses as they see and hear whatever is in their virtual environment. They can also feel, smell, pick up and touch virtual objects and beings with no latency that react to audiences’ behaviors.

“We’re really trying to sort of merge the thrill of a great theme park with the emotional satisfaction of a Hollywood movie,” says Dreamscape chairman and co-founder Walter Parkes, the screenwriter behind films such as WarGamesand Sneakers and a producer of blockbuster films like Men in Black, The Ring, Minority Report and many others. “We can enable that through extraordinary digital technology so it can be enjoyed in locations like this all over the world.”

The Dreamscape experience is almost entirely immersive, even before you put on the headset and step into the multi-sensory theater. Guests are invited to choose one of three “destinations” — the undersea adventure The Blu, the sci-fi sanctuary Alien Zoo and the thrilling archaeological journey The Curse of the Lost Pearl: A Magic Projector Adventure.

Once their boarding time is ready, a representative leads guests into a preparation chamber where they put on motion trackers on their hands and feet and Samsung VR headsets attached to a backpack computer. The director of each experience explains the instructions and rules as if the guests are actually going on a deep sea dive in the Pacific Ocean or stepping through a magic movie screen that transports them into a Mayan temple filled with deadly traps and creepy, crawly animals.

“We’re really trying to sort of merge the thrill of a great theme park with the emotional satisfaction of a Hollywood movie.” — Dreamscape chairman and co-founder Walter ParkesThen, as guests enter the main stage and don their VR helmets, the computers place them in virtual worlds where interactive objects in the digital world are mirrored and timed with physical objects in the real world.  So when guests board their Segway-esque water scooters in The Blu, they can steer the craft. Similarly shaped physical objects are available when guests need to pick up their flashlights for the nocturnal exhibit of the Alien Zoo. Explorers who dare retrieve the Lost Pearl in the foreboding Snake Temple will…well, that’s a big spoiler.

Strategically placed fans can blow hot and cold air to match the environment or the animals that are breathing down your neck. The floor vibrates and shakes as structures crumble, platforms rise and lower and massive creatures’ stomps creates vibrations.

“These things function like real memories,” says Bruce Vaughn, Dreamscape’s chief executive officer who previously worked as the chief creative executive of the Walt Disney Company theme park imagineering department. “When we first did Alien Zoo, we asked people what do you think and they didn’t say, ‘Well, I went and saw Alien Zoo‘ like you would with a movie theater. They said we went to Alien Zoo. They were there. They touched things.”

The guests who were among the first to try the experience expressed similar thoughts about being in the movie as opposed to just seeing it.

“It feels like you’re there,” says guest Kelli Nicole McClain who went through Alien Zoo and The Curse of the Lost Pearl. “I thought I was gonna drop off the edge in the Lost Pearl one.”

The experiences aren’t as long as a typical mainstream movie. Vaughn says the shows are designed to be more accessible in as many ways as possible.

“I like to use the word that it’s kind of snackable,” Vaughn says. “You can pop over and try something out or take a break from work and make it part of a bigger evening. With six people at a time, it allows you to have much more agency and customization. It really becomes a really personal thing versus a giant theme park attraction with 2,000 people an hour where you don’t feel that special.”

Guest Ryan Gaspard likens the attraction to getting “sucked into your TV or a cartoon.”

“You’re in a completely different world,” he says. “Being able to interact with everything is a lot different than sitting at home with your PlayStation and playing with a controller or a wand or something like that. To be able to feel the air sets its apart, the rumblings, all the 3D effects that make it whole.”

Right now, there are only three virtual movies at NorthPark’s Dreamscape location but Vaughn and Parkes say more will be coming down the pipeline based on branding film franchises like How to Train Your Dragon, where guests will get to ride on the back of their own dragon and Men in Black, where guests are recruited as shadow agents of the secret government alien monitoring force.

Just imagine what could happen with a virtual horror movie.

“Horror is a very interesting one,” Parkes says, referring to the movie genre. “It’s funny because it can be so scary, and we’ve done tests that are just crazy.” 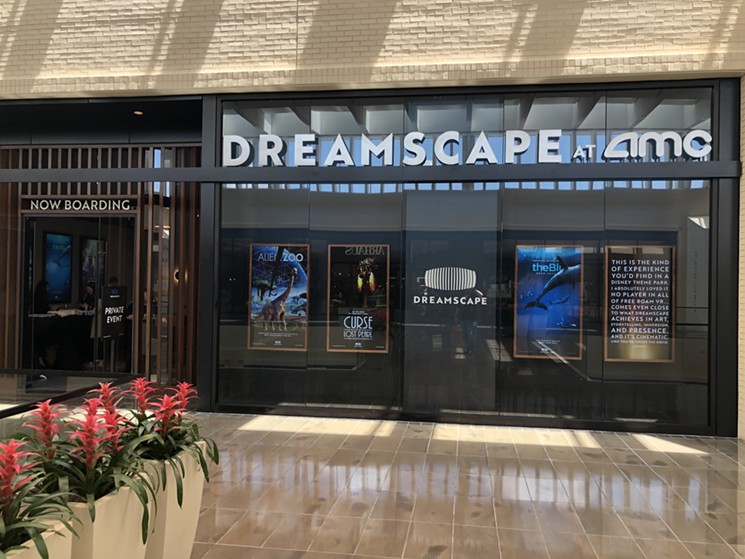 Source: The 10 Best Free and Cheap Events Happening in Dallas This Weekend, Aug. 16-18