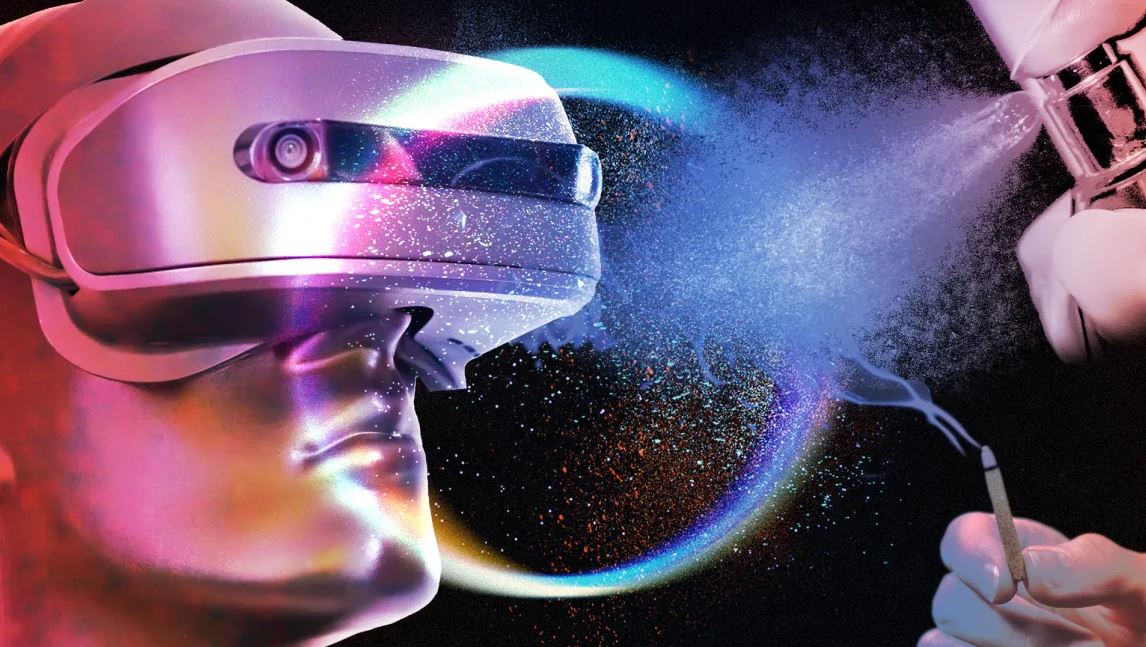 Inside San Francisco’s Museum of Craft and Design, a long hallway painted eggshell blue is lined with the most extraordinary devices. A glass globe that uses trained bees to detect the presence of disease in a person’s exhalations. An Alexa-esque diffuser that emits fragrances at timed intervals to encourage people with dementia to eat. A USB-powered silver necklace that gives off a scent—fragrances include “fascinate,” “annihilate,” and “carouse”—when its wearer’s heart rate tops 110 beats per minute. All the items are here as part of Living With Scents, the museum’s first olfactory exhibit.

But it’s a far more unassuming item—a pair of VR glasses—that catches my eye, and my nose.

Living With Scents, 2022, Museum of Craft and Design. [Photo: courtesy of Henrik Kam]

Resting next to the headset is the secret sauce of this experience; a white, Bluetooth-enabled snap-on cartridge, aka the ION, the flagship product of Vermont-based OVR Technology (short for olfactory virtual reality technology).

“It’s critical that scent be [part of] metaverse development . . . or we’re completely limiting the potential,” OVR’s CEO, Aaron Wisniewski, tells me later over Zoom. “Smell has this profound effect over who we are, how we feel, what we do, what we buy, who we love.”

OVR’s snap-n-scent cartridge comes preloaded with nine chemical compounds, which combine to make hundreds of scents, released via digitally programmed cues. Creating smells is a complex, convoluted process; while “strawberry” or “chocolate” scents are straightforward, to create “beach” requires a combination of sand, sea breeze, and SPF.“Unfortunately, there’s no RGB of scent,” Wisniewski says. A software plugin makes the ION compatible with Unity and Unreal content. He hopes to release a consumer version in 2023.

Sadly, OVR’s exhibit does not include a hands-on demo, due to COVID-19. “We’d like to dive deeper with our audience,” says Sarah Beth Rosales, the museum’s communications director. “People don’t [always] think of the more abstract ways in how objects hold scents. Being able to showcase [scent] is really important.”

Smell, after all, is more than just a fragrant add-on to life; our olfactory neurons create unconscious, physiological responses. Japanese plum blossoms, for example, were found to activate the sympathetic nervous system, improving mood and energy. To truly build an immersive metaverse, it is vital to include scent; in absentia, things feel off-kilter.The convergence of tech and scent is not a new thing—the short-lived Smell-O-Vision debuted in 1960!—but the lack of broader adoption was more about outlook than offerings. For years, many considered smell the least important of the senses. A 2018 study of millennial Brits found 64% would rather sacrifice their sense of smell than their smartphone.

But during the pandemic, due to the virus’s sometimes debilitating effect on our sense of smell, this shifted. In smell absentia, people gained a new appreciation for what their 400-plus smell receptors brought to their lived experience: the memories scent evokes, its psychological impact, and the exceptionally strong interplay between smell and taste.

This deeper understanding of scent paralleled the wider paradigm of integrating multisensory technology into everyday use: In 2021 Amazon patented an odor-recognition application for its Ring doorbells, and in 2019, Google’s Brain Team announced it had successfully designed a neural network to accurately assess smells at a molecular level.

Today, as metaverse engineers, designers, and architects map out the look of digital future experiences, for some, smell has become a key part of the puzzle. Whoever defines the smell-o-verse first will lead this nascent category, meaning the smell-off is ON.

In Los Angeles, veterans with post-traumatic stress disorder experience OVR’s scents through VR exposure therapy treatment inside labs at the University of Southern California’s Institute for Creative Technologies. Those smells are especially challenging to replicate; to re-create gun smoke, for example, you need to mimic the sulfur dioxide, a toxic gas that’s illegal to manufacture.

“We have to figure out a work-around using molecules that are analogous but safe to use,” Wisniewski says. “Smell is this chaotic soup of molecules.”

OVR’s one of many players in the digital scent space. Perhaps the most interesting smell-o-verse hardware is being cooked up in Jas Brooks’s Chicago lab. The PhD student’s Bluetooth device sits over the septum and sends tiny electrical pulses that stimulate the trigeminal nerve (the cranial nerve that delivers facial sensations) to create directional information about an odor for the wearer (it won a Fast Company award for experimental design).

In the U.K. there’s OW Smell Digital, which raised $1.2 million to develop an AI-driven cloud-based “Photoshop for smell” service. In Spain, Olorama Technology has developed a 400-scent library (fragrances include “pastry shop,” “mojito,” and “wet ground”) delivered via scent-releasing boxes, many of which can be voice-activated by the user. Also available: a COVID-testing smell kit. Olorama’s luxe product, a 40-smell unit, starts at $13,408. On the wackier end of the spectrum is an NFT fragrance from Berlin-based Look Labs, captured via a near-infrared spectroscopy recording of a scent’s molecular wavelength.

But behind every fledgling company lies the graveyard of startups past. Feelreal’s crowdfunded multisensory VR mask demoed to acclaim in 2015 but went dark in 2020 (in part due to flavored vaping laws), leaving behind a raft of unhappy investors. Tokyo-based Vaqso, which raised $600,000 in 2017 for its clip-on cartridge-and-fan combo, hasn’t updated its website in years.

“It’s interesting technology but not an interesting business model . . . yet,” says Christina Ku, a venture capitalist at Docomo Ventures, whose parent company, NTT Docomo, has incorporated digital smell into Cokoon, its custom-built metaverse-in-real-life meeting room. For Ku, the lack of major investments “denotes the very early stage of smell.” But commercial brands are intrigued, she adds, highlighting Nissan’s investment in its “new car smell” and hiring of certified smellers. “That’s the next element,” she says.

However, Yash Patel, a general partner at Telstra Ventures who invests in Web3 startups, sees integrated scent as a distraction from the bigger picture. “The metaverse will not be driven by the hardware,” he says; in his timeline, interoperability comes first, better devices come next, and only then will there be space to develop immersive add-ons.

Another player in the digi-scent space is Arkansas-based Hypnos Virtual. Its approach is twofold: On the hardware side, the company has a connected nebulizer, preloaded with scents collected through a cold-diffusion process to maintain the purity of the ingredients. Its software blends them together, based on data inputs, and releases them at select times, chosen via its in-house “scent poets” or through its artificial intelligence. A drag-and-drop scent editor is also in the works, says CEO Michael Kaczkowski. Think how much richer those vacation slideshows will be if you can include sensory details.

Then, a hitch. In 2020, Kaczkowski, who also manages a prosthetics company that re-creates lifelike skin, eyes, and limbs, came down with COVID-19. It felt like someone had dropped a boulder on him; he felt lethargic, and his sense of smell vanished. “It was horrifying,” he says. “I’ve spent years and millions of dollars on this, and now I can’t smell.”

He took some small comfort in knowing that the human body, even without smell, would still physiologically (though not psychologically) respond to scent inputs, meaning the medical side of Hypnos was still in play, especially its cannabinoid cartridges that deliver smoke-free THC and CBD. (Meanwhile, Kaczkowski says he has now recovered 80% of his smell). Trialed by anesthesiologists, this is the area that’s sparked the most interest from investors, he says.

The THC side of things also raises some interesting opportunities for Hypnos Virtual’s cinema model (“Imagine modulating your high during a movie,” Kaczkowski says). On the consumer side, he’s working with high-end home theater designers for a slow rollout, priced around $25,000. “The price will drop over time,” he adds.

There’s no question that smell evokes certain chemical and emotional responses in humans. Many professional bowlers use scented balls because of the positive associations they evoke. But while we all inhale the same chemical compounds, our responses are unique to our own histories, memories, and social makeup. As the metaverse expands, the only way for it to truly mirror reality is to include scent from the start. People may notice its absence more than its inclusion, but for really lifelike immersion, these pain points must be removed.

Before exiting the Living With Scents exhibit, I stopped at the interactive perfumery table, hosted by the Ministry of Scent perfumery. I smell-tested around 30 vials, categorized into top, middle and base notes, and circled my favorites on a sampler sheet. Its second station held brown bottles with droppers, and I whipped up my own scent, based on my top-ranked notes: a dash of tea rose, chocolate, and aquatic. I took a deep sniff, and coughed: It had a wet, cloying smell, like detergent, and wet dogs, and stale biscuits.

It was a good reminder that as much as scent is everywhere, it’s also an art form. The majority of the metaverse will be developed by software engineers, who, while skilled at their work, lack the nuanced knowledge of scent. Acknowledging this, many have brought in outside experts, such as fashion designers for Metaverse Fashion Week, and consult and contract with big-time architects on city creation. With this in mind, perhaps the job of “scent choreographer” will soon be part of the metaverse hiring boom.

Source: Inside the smell-o-verse: Meet the companies trying to bring scent to the metaverse

Just because someone’s dead doesn’t mean it’s over. My grandfather died more than 25 years ago, but I still think of him a lot and smell his smell.