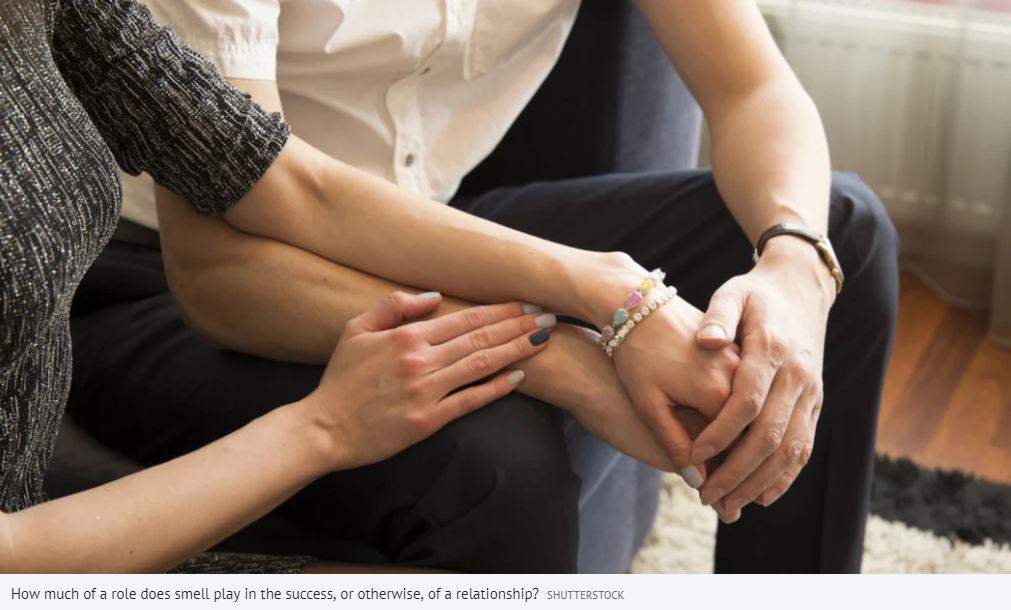 How much of a role does smell play in the success, or otherwise, of a relationship? CREDIT:SHUTTERSTOCK

Dr Mehmet Mahmut first became fascinated with smell when he was an undergrad psychology student at Macquarie University.

A lecture on the link between memory and smell – delivered by the man who would later become his PhD supervisor and eventually, a co-researcher, Professor Richard Stevenson – intrigued the young Dr Mahmut so much that he decided to dedicate his career to finding out how our olfactory sense influences various facets of our lives, and, eventually, our relationships.

“Olfaction is probably the most under-researched of human senses,” he says.

“Unlike vision, which is easy to study as participants can often easily articulate what they see, olfaction is more ambiguous, and we often lack the vocabulary in the West to describe various types of smells and what they mean.”

Dr Mahmut’s earlier interest in olfaction was somewhat unrelated to relationships: “I actually became more interested in smell while studying the degree of psychopathic characteristics in people living in the community compared to people who were incarcerated.”

The link? During his research, he came across a couple of studies looking at psychopaths’ reactions to (bad) odours, and what their sense of smell was like.

“It turns out that people with stronger psychopathic traits have lower levels of olfactory ability, finding it harder to distinguish between common smells like coffee, fish, and oranges,” Dr Mahmut found in his 2012 study on the topic.

This led him to consider how psychopaths behave in relationships (badly, it turns out), and the effect a sense of smell has on the success – and failure – of a relationship.

We know that smell is important to attraction, with various studies showing that using oral contraceptives can alter women’s preferences for men’s body odour. We also know that women, regardless of their sexual orientation, tend to find body odour more important in a partner than men, who rely more heavily on visual cues.

When you meet someone, you probably don’t want to be taking contraception at the time to help you work out if you really like them.

On the other hand, having a bad sense of smell is associated with depression and reduced sexual desire, both of which may impede our desire and ability to find a partner.

But can the way a partner smells be a major factor in the breakdown of a relationship?

“That’s the most exciting part of this research — and what we’re trying to find out,” says Dr Mahmut.

“We’ve been trying to understand what happens at the end of a romantic relationship, and whether disliking your partner’s body odour can predict or have any bearing on whether you’re more likely to break up with them.”

This is what forms the basis of Dr Mahmut and his co-author, Professor Ilona Croy’s (Technology University Dresden), most recent review (released on Thursday) which combines the findings of 91 separate olfaction studies on various stages of a relationship, and looks at the effects of smell on the entire life of a romantic partnership (so its beginning, middle and end).

“Until now, no one had pulled all the research together and presented everything in such a way that would enable us to work out what we know about smell; what we don’t know about it and where to go from here,” Dr Mahmut says.

While at this stage Dr Mahmut says evidence in this area is largely anecdotal, there appears to be a link between a relationship breakdown and women who report finding their partner’s body odour “disgusting”.

“The perception of one’s partner’s body odour as disgusting is predicted to result in the reduction of intimacy, and may ultimately contribute to the dissolution of the relationship,” the researchers wrote.

“Perceptions of a partner’s smell may change from a source of comfort and safety to being ‘repulsive’ as a relationship breaks down”.

The key, says Dr Mahmut, is differentiating between “disgusting” odour caused by certain health conditions (such as diabetes, which has a distinct mouth odour) which may even fade over time, to literally finding your partner’s smell repulsive.

“We don’t habituate to disgusting smells, meaning that repeated exposure to a smell we find disgusting will not make us learn to like it,” Dr Mahmut says.

“If feelings of disgust are not the temporary manifestation of a health condition that may pass, it may indicate the relationship is in turmoil and motivate termination”.

So how can we best guard against a relationship breakdown? For women, the key may be staying clear of contraception when first courting.

“When you meet someone, you probably don’t want to be taking contraception at the time to help you work out if you really like them,” Dr Mahmut says.

For men, the smell of their partner may not be as important, but still plays a role in determining the success of their sex lives, with studies finding that men born without a sense of smell (a condition called congenital anosmia) reported fewer sexual experiences.

The moral of the story is: “Trust your olfactory instincts, as they are often correct,” Dr Mahmut says.

“Humans have this sense for a purpose and even though it can feel superseded by other senses, smell can have important predictive value and can influence our behaviour positively.”