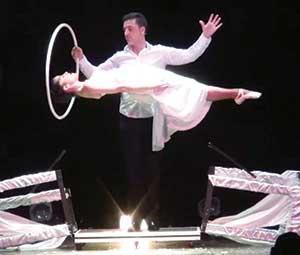 Magicians never fail to astonish us, unless they are very bad at their trade. Their ‘tricks’ often defy scientific explanation; may be because magic is more of an art. After all, it is the performance that matters. Magicians exploit the fact that there are limitations to the manner our brains perceive, process and interpret inputs from our senses. They often use distractions to fool our senses. They walk on water, levitate, make objects appear from thin air and, even, make huge objects disappear. They are bound by a ‘code’ and do not let the secrets out but, of late, there is a new breed of extremely talented magicians who let some secrets out. Counterintuitively, this has made the interest in magic even greater.

Magicians are also referred to as illusionists: “One who works with illusion or sleight of hand”. Though most are content to call themselves magicians, some attribute their powers to ‘out-of-this-world’ origins and some go to the extent of invoking religion with the claim that their magical performances are nothing but divine miracles. They respond to scientific challenges in different ways.

Uri Geller, well known for ‘spoon-bending’, claimed his paranormal powers were granted by extra-terrestrials. Parapsychologists at Stanford Research Institute, who conducted tests for the US Defence Intelligence Agency, concluded that Geller had “demonstrated his paranormal perceptual ability in a convincing and unambiguous manner”. However, Geller faced public humiliation when he could not demonstrate his paranormal abilities in the ‘Tonight Show’, the talk host, Johnny Carson having taken advice from a magician and prevented the trickery of Geller. He escaped to the UK to build a new career!

An illusion can be defined as “an instance of a wrong or misinterpreted perception of a sensory experience” or “a deceptive appearance or impression” or “a false idea or belief”. However, it commonly refers to misperception of sensory experiences. Though illusions can alter our perception of reality, it is an experience shared by many. Unlike hallucinations, which is the apparent perception of something not present, illusions do not signify any pathology. It is simply the way our mind and brain work. Illusions may occur with any of the senses but visual illusions are the commonest, best known and understood. May be, this is because vision dominates the other senses.

Overall, we have done well with vision but other animals beat us in specific features: birds of prey, specially eagles, have excellent long-distance vision; the tarsier, a squirrel-sized primate, has the largest eyes relative to body size and may see UV light; the eyes of a chameleon move independently spotting prey better; a dragon fly has eyes covering the entire head and the rectangular eyes of the goat gives it 320-340 degrees vision.

Apparently, it is the little moth that has the best hearing which it needs to outwit its main predator the bat, who is also renowned for good hearing. Bats have been using ‘echo’ guidance to find their way for ages, which we have copied for radar and ultrasound diagnosis. Owls, elephants, cats, dogs, horses, dolphins and whales have better hearing than us, and of a wider range.

In the smell stakes, we are far down. Bears are the best, a black bear being able to travel 18 miles in a straight line to a food source or a male bear hundred miles in search of a sexually receptive female, purely by smell! Sharks are well known to smell blood from miles away and elephants can get the scent of water 12 miles away. Kiwi, moth and snakes are also known for the acuity of sense of smell.

Catfish, again, tops the table. The tiny jewel beetle can sense fire from 50 miles and the moment it senses, flies away to mate. The star-nosed mole uses its nose for touch more than smelling. Crocodiles, alligators, manatee, seals, crickets and even spiders do better than we with regard to touch.

Variations are totally different from illusions and, perhaps, give an insight to what is possible. One of the most interesting recent examples is the case of the Scottish nurse who can smell Parkinsonism, a degenerative disease with tremors which was described by the English surgeon, James Parkinson in 1817. Joy Milne found a change in her husband’s smell 12 years prior to the diagnosis, at the age of 47. Subsequently, she astonished researchers by being able to correctly identify patients with Parkinson’s disease by smell alone, under controlled conditions. This led to the search for the molecules responsible for this musky smell, which the scientists found on the skin and this may lead to a diagnostic test for early Parkinson’s disease, in the future.

Optical illusions are the commonest and we have all witnessed, at least a few of these. When watching a film showing a fast-moving vehicle, wheels suddenly stop turning and then start to turn in the opposite direction. This happens because of the way images are captured. Static images are captured on film, about 24 frames per second, which when played give the effect of motion. When the frequency of wheel spin matches the frame rate, it gives the impression that the wheel is stationary and slightly faster produces reverse rotation effect. This technical problem produces an illusory image.

Optical illusions are by far the commonest and stand testimony to the fact that what our brain interprets, at times, is not the reality. A scan on the web will give many examples of optical illusions, fascinating to watch, and a start can be made with the Wikipedia link:

Phantom limbs are felt after amputations, may be because the brain does not want to lose the limb.

It is the mind acting on the input from our five sensory organs as well as the limits of the brain in interpretation, that creates illusions. Perhaps, this is the reason why the Buddha considered the mind to be the sixth sensory organ and also rightly stated that the world we perceive, is the world that our mind has created for us.

May be life itself is more of an illusion, than we realise!