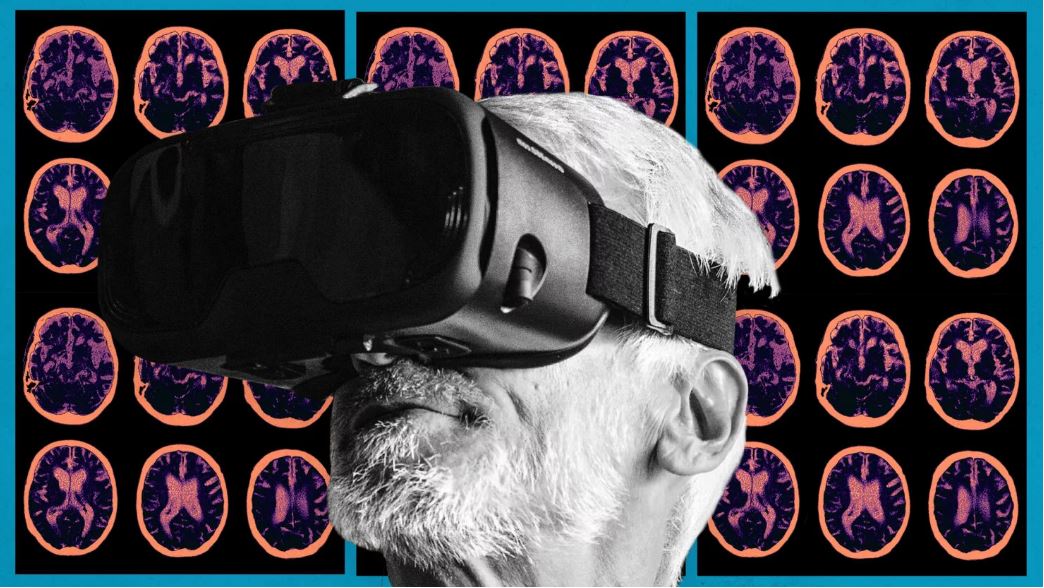 How Virtual Reality Can Help Fight Dementia | The Daily Beast

Photo Illustration by The Daily Beast

She always wanted to go back to her cabin in Norway—so much so that one day, she left her dementia care facility where she was staying, and tried to drive there. Except she wasn’t supposed to be driving. She got lost, and the police who found her called the family who were able to bring her back home safely. Now, she hasn’t been able to visit her cabin for several years, but constantly asked about it and wished to go back

That’s where Arfa Rehman and Scott Gorman stepped in. The two used their immersive virtual reality (VR) therapy program, Look Back, to give their friend’s grandmother a sense of the place where the cabin was.

“Using our application we were able to create places reminiscent of that same region, which had a great effect on her,” says Gorman. “It’s those kinds of opportunities that stick with us.”

Rehman and Gorman are co-founders of the UK-based healthcare startup Virtue, which is focused on helping people age well, meaning they help the elderly maintain their mental health and identity, as well as dignity, as they age. One of their first efforts was to develop Look Back, touted as the the world’s first platform providing immersive reminiscent experiences for people with dementia. Essentially, the program uses VR designed for the elderly, especially people with dementia, to be able to revisit old memories, places, and spark conversations about past experiences.

Unfortunately, the situation Rehman and Gorman’s friend’s grandmother faced isn’t new or uncommon. The number of people with dementia around the world is estimated at 47 million and is projected to increase to 75 million by 2030, according to the World Health Organization. That number is expected to almost triple by 2050. According to Alzheimer’s Research UK, the average cost per year for caring for someone with dementia can be anywhere from £26,000 to £40,000 (between $33,000 and $51,000), depending on the care type and how severe the case is. Meanwhile in the US that cost could would be closer to $97,455 per year for a private room in a nursing home, says the Alzheimer’s Association.

In this instance putting patients into an intimate setting from their past helps them remember not only past memories, but where they came from and who they are. Dementia can cause people to forget who, and where, they are entirely at some points. Putting them in a past memory can help remind them of the story of their life, and remind them of the narrative they’ve lived. With the Virtue’s Look Back platform, you could choose to be at Brighton beach in the 1960s, or perhaps at the queen’s coronation, reenacted by actors in the clothing of the era.

But what’s the point of putting people squarely back in the past? Researchers say this nostalgia helps patients by reminding them of their sense of identity, one of the casualties of dementia.

“The elderly use the familiar knowledge, skills, and strategies to develop stable patterns of activity and adapt to aging,” said YC Lin in an early study on the topic. “Remote memory, within which reminiscence processes occur, is usually the last system to deteriorate in the elderly. Increased use of remote memory in older adults improves general cognitive function.”

“Research has found reminiscence therapy to have a number of therapeutic benefits.”

Finally, a 2017 study from Georgetown University Hospital found that for reminiscence therapy involving a 90-year-old man who suffered from dementia, bringing in photos associated with positive memories would lead to him recalling the moments captured in a surprising amount of detail. His wife was incredibly surprised at this, and after three months of the therapy, she found that there was “significant improvement in her husband’s behavioral symptoms and stated he was calmer and easier to direct. She also expressed significant relief of her own caregiver burden, which had been a concern prior to starting therapy.”

Immersive tech offers an interesting possibility. Prior to Virtue, it was being heavily used for video games and short films. Rehman and Gorman thought VR provided the perfect use case for taking the concept of dementia villages and making them accessible to more nursing facilities.

“I had family in care homes as well and they were far from the kinds I wanted to be able to afford,” Gorman said. “They didn’t have the luxury of a precreated village. In fact they were pretty sterile, and not stimulating at all. So I think people are very curious and eager for inexpensive solutions that can improve quality of life.”

One thing Rehman and Gorman have noticed is that these immersive experiences lack diversity. A mid-90’s village in the Netherlands is going to be starkly different from one in Vietnam during the same time frame.

Using virtual reality specifically for this case allows Virtue to address the diversity of people with dementia, which is a neglected part of this conversation, says Rehman.

“Dementia villages are impactful and amazing but I haven’t come across one yet that would spark memories for someone like my grandparents, or someone from my culture,” she says.

“I haven’t come across one yet that would spark memories for someone like my grandparents, or someone from my culture.”
— Arfa Rehman, Look Back

Virtue can create a more personalized experience for the patient. Virtue works to create a general experience using the person’s age, where they lived, and a number of other factors to create a historically accurate experience which patients can then explore on their platform. In Virtue’s experience, simply inserting a certain car model can spark memories and stories about a long-ago road trip with friends that some family members might have never even heard about before. Even a few minutes of sensory stimulation in immersive tech provides an opportunity for patients to reconnect with an emotional and geographic baseline feeling they have. This reminds them of a story or memory that serves as a narrative bridge for caregivers, family, or other people to engage with them in a way that that provides a sense of human connection that may have been lacking before.

Look Back is currently in trial in care homes by Rehman and Gorman, but the UK National Health Service (NHS) also reached out to them and is conducting a longer term trial. U.S. based trials could begin soon.

“I believe that software such as LookBack that can deliver reminiscence therapy as well as pleasant experiences in a VR environment would be beneficial as one of the tools available to caregivers of people with dementia,” says Michael Hurt, who runs dementia services for the National Health Service Walsall Clinical Commissioning Group in the U.K.

“The pilot and audit will show what works best for people. Although the pilot only started earlier this month, I have received some positive feedback from some of the areas already. This could also be a cost effective intervention that doesn’t require much training before use.”

The senior population is often neglected when it comes to discussions about who benefits most from new technologies, in part because there may well be a bias against believing seniors would engage with something like VR. Virtue, it seems, is taking a different approach.