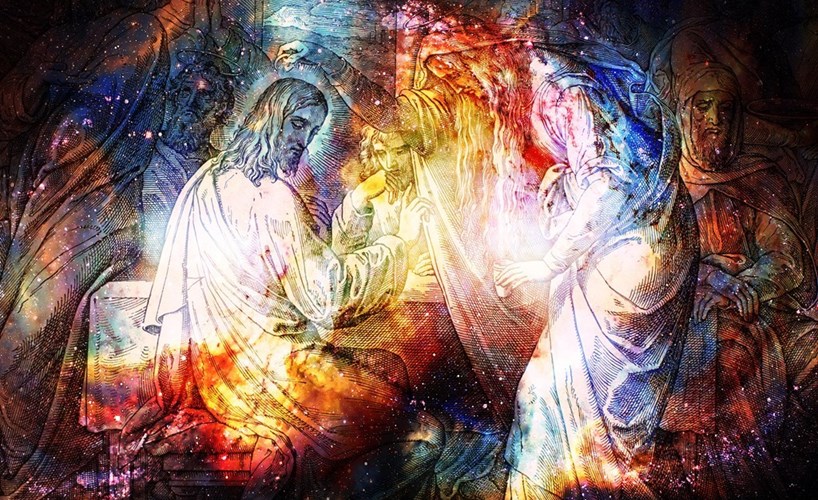 An engraving of the woman at Bethany anointing Jesus with perfumed oil, published in the Holy Bible, St Vojtech Publishing, Trnava, Slovakia, 1937

CHRISTIANITY can be an olfactory faith. Low Church Protestantism might smell rather bland; but the further the worshipper moves towards the Catholic end of the spectrum, the more the nose is assaulted and delighted.

Smell plays an important part in the biblical narrative, from the aromas of burnt offerings in the Old Testament through to the precious perfume used shortly before the Passion to anoint Christ. From Genesis 2 to Revelation 18 there are more than 200 references to perfume, odour, and smell.

The old Temple in Jerusalem must have produced an over-powering stench of sweaty humans, frightened animals, burning flesh, and incense. The scene of the resurrection must have had a distinctive smell of embalming chemicals mixed with the early morning scents of garden plants.

About 12 years ago, Dr Charles Sell, a chemist who was then working for an industrial fragrance company in Kent, started a research project into the history and chemistry of the biblical references. The results of his work have now been published as a book by the Royal Society of Chemistry, Perfumes in the Bible (pubs.rsc.org).

It is a wide-ranging study in which, in addition to chemistry, Dr Sell examines geographical sources, botany, sensory science, medicine, and the arts. There is even a section on perfume storage. Bottles, interestingly, have survived from before 500 BC, and Isaiah mentions the ownership of perfume bottles as one of the trappings of wealth, along with bracelets, charms, and nose-rings.

Some of the substances referred to in Perfumes in the Bible are familiar. Frankincense and myrrh are central to the nativity story as two of the gifts of the magi. Yet there were also many rare and exotic scents available to the people of the ancient world, with names that are no longer instantly recognised, such as onycha, galbanum, styrax, and nard. Matching the original Hebrew and Greek to modern names was not, Dr Sell found, always a matter of straightforward translation, and required additional linguistic research.

THE story starts with the mention of the river flowing from the Garden of Eden. One branch led to the land of Havilah, where, as well as gold and precious stones, bdellium was to be found, a fragrant gum resin and an early ingredient of perfume.

For many centuries — until science devised ways of analysing the chemical make-up of smells — the perfumers’ practice was a secretive art. Formulae were rarely published. When Herodotus asked the perfumers of Arabia where they found labdanum, they told him a cock-and-bull story about how they combed it from the beards of goats.

Given such reticence, it comes as a surprise to find two recipes set out in the book of Exodus. They were protected not by secrecy, but by threat of punishment: those who tried to recreate sacred tabernacle perfumes for their own use would be sent into exile. Measured out in shekels, the Lord told Moses to take portions of myrrh, cinnamon, calamus, and orris, and, having dissolved them in olive oil, to use the mixture to anoint all the holy vessels as sacred, and to anoint Aaron and his sons as priests.

The sacred incense was to contain equal amounts of styrax, onycha, galbanum, and frankincense, ground together into a fine powder. On the Day of Atonement, Aaron was to burn clouds of incense to obscure the Ark of the Covenant to protect him from seeing God. Strict instructions were given that only the priests were to use the special holy incense, and, when 250 men disobeyed the command, they were destroyed by divine fire, the book of Numbers relates.

THE ancient world of the Middle East was the centre of a network of trade routes that enabled aromatic ingredients to be sourced from many hundreds of miles away. Frankincense, according to Jeremiah, was brought from Sheba, and is today produced in the Horn of Africa and the south-west tip of the Arabian peninsula. Of all fragrances that get a mentionb only galbanum, a resin extracted from a flowering umbelliferous plant, is a true native of the Bible lands. Cinnamon comes from Sri Lanka, and cassia and agarwood are products of China.

Frankincense is collected as “tears”: nuggets of a pale-yellow resin that oozes from wounds cut in the incense tree, one of the Burseraceae family. As with many types of tree, when the bark is damaged nature responds by producing a chemical to protect the tree from bacterial and fungal attack. The chemical solidifies to form a substance that exudes a fragrant smoke when burned.

Myrrh is also sourced from Burseraceae trees, in the same regions of the world as frankincense. The antimicrobial chemicals produced by the trees to protect themselves have properties that can also be used in the embalming of bodies.

Nard, or spikenard comes from much further afield. It is extracted from the roots of a shrub growing at high altitude in the Himalayas. It formed the highly expensive perfume used by the woman, probably Mary Magdalene, who anointed Christ’s feet and dried them with her hair, in St John’s account.

The perfume’s cost can be attributed to both its rarity and the distance it had to travel. Exactly how valuable it was became a matter of some debate in the Gospels, and the quantity used by Mary was probably worth the equivalent of a year’s wages. What a waste, the disciples said — the perfume should have been sold, and the money given to the poor. But Jesus rebuked them, telling them: “It was intended that she should save this perfume for the day of my burial.”

PERFUME in the Bible is found in prophecy, metaphor, and poetry. The gifts of the magi — gold, frankincense and myrrh — served a prophetic purpose as they foretold Christ’s kingship, priesthood and death.

St Paul employs metaphorical references to perfume in his Epistles. In writing to the Corinthians, he talks of sharing the good news of Jesus as spreading the pleasing aroma of Christ. And the Ephesians are told that followers of Christ should be an offering whose fragrance is pleasing to God.

Psalm 45 is one of several employing the language of fragrance (“All your robes are fragrant with myrrh and aloes and cassia”). In Psalm 141, prayers are likened to incense.

THE sense of smell is one of the oldest in animal evolution. And, even if it is not the prime sense for humans, it remains one of great potency. As the Bible writers knew well, smell has a powerful effect on the emotions. Smell evokes memories and, in the right circumstances, can induce a sense of the sacred.

Modern researchers have examined the chemistry of the vapours given off by burning incense and identified the chemical incensole acetate, which is known to induce a feeling of calm. Modern church incense, such as that used on special occasions at Canterbury Cathedral, where Dr Sell now works as a volunteer guide, might also contain rose oil, although the exact recipe of Rosa Mystica, as made by the monks at Alton Abbey, is a secret.

To understand smell in modern scientific language — to identify, for instance, that the curious smell encountered on entering an old church is the chemical geosmin — is not to diminish the mystery. “The more deeply I look into the mechanism of odour perception,” Dr Sell writes, “the more I agree with the psalmist who wrote: ‘We are fearfully and wonderfully made.’”

The way I miss my daughter Esme is to worry about her. It is not a pleasurable longing. It contorts my body and scrambles my brain, makes me stop breathing, clench my jaw and my fists, it makes me frown, and makes me blind and deaf, in fact entirely without sensory perception.