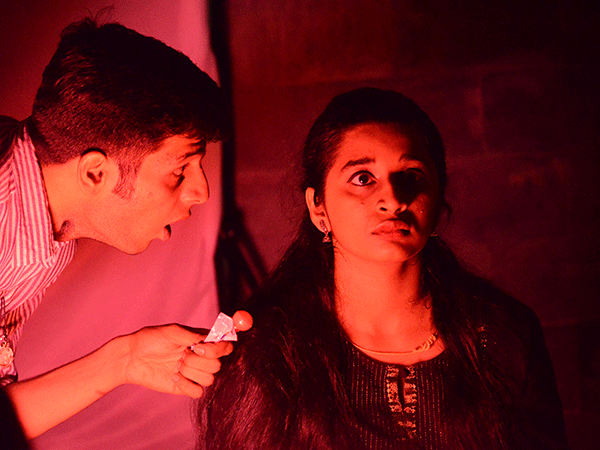 Heard of immersive theatre? Now, smell and hear it in Mumbai

You had musicalised theatre and interactive plays and now, there’s another trend to add to that list. In ‘Darkroom 2.0’, theatre-goers are in for a thrilling ride as sounds and smells play a key role. The audience is taken on a tour through a beautiful space that is converted into a darkroom, where every corner tries to tell a story.
The play, directed by Tushar Tukaram Dalvi, is a journey of exploration of three classical stories that are unfolded in a unique experiential way right in front of the audience’s eyes. The mystery and thrill of uncertainty slowly unfolds. When you arrive, you are still blindfolded as you are greeted with characters from the story. They whisper in your ears. Scents play a crucial role in the sensory experience and as each one is said to carry a memory, you are exposed to a distinct scent with each story. While seated, the audience also has to decide about the characters from each story.

Explains Tushar, “The first 15 minutes is the sensory experience. Dialogues are whispered in the audience’s ears and this is done in a dark room setting. Here, the audience’s psyche becomes the photographic paper for us, the story we do turns into the ‘negatives’ and performances and sets become the process. So, in this way the audience is totally drawn into the play. Actors become their friends and the performances happen all around them – 360 degrees! They share jokes and stories with them. And finally, they mix so well with that there is no wall between the actor, character and viewer. Thus, the audience-space relationship changes.”
The play will be staged on March 25 at Whistling Woods, Andheri Base and on March 31 at Aleph Cafe, Juhu.

Source: Heard of immersive theatre? Now, smell and hear it in Mumbai