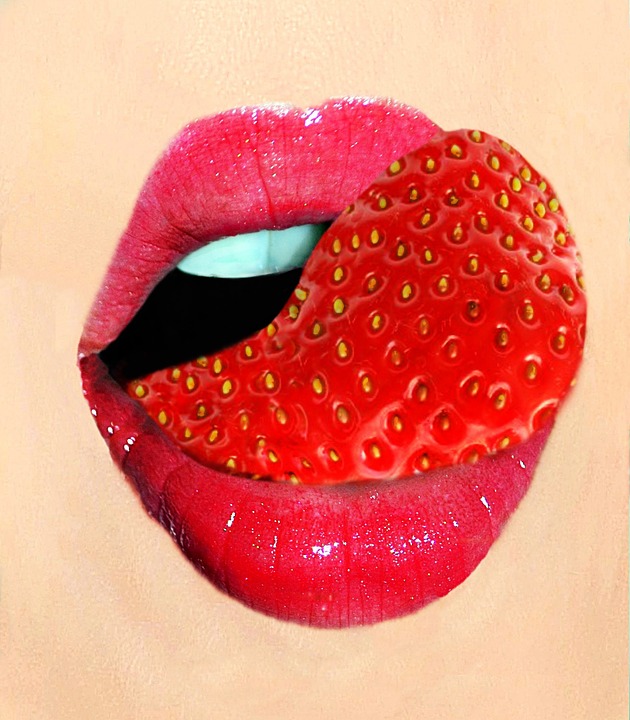 Harness the five senses to ignite your sex life | Brinkwire

As a relationship matures and you leave the first intoxicating months behind, feelings of sexual attraction often settle into something more comfy and less lustful.

But although a secure partnership is a rare joy, many couples long to get that excitement back in the bedroom. How to rekindle the spark?

Often we focus on what’s going on in our minds. Are we stressed? Overtired? Worrying about work or money issues? In my view, the best way to reconnect is to focus on our bodies instead, by harnessing all five senses. By understanding how their constant interplay can make the world seem bigger, brighter and sexier. Did you know, for example, that puddings taste sweeter if you serve them in a red bowl?

Or that when we’re cold, we’re more likely to splash out on indulgent treats?

Or, more to the point here, that sex is better if men can smell doughnuts or liquorice? These are the insights, from the worlds of neuroscience and behavioural psychology, that I use every day to market products and boost brands.

At the pioneering design agency I founded ten years ago — in the process inventing an entire industry — we approach everything we do from a multi-sensory point of view.

We humans might think we’re rational beings who make well-thought-out, intelligent decisions, but we’re not.

We’re emotional machines who make emotional decisions and then explain them rationally after the event.

And once you understand the science — and become aware of the way your senses constantly influence and change you — you have the tools at hand to enhance and intensify every experience of daily life, from eating to shopping to sex.

Over the years I’ve made ice creams taste better by making the cones sound crunchier when you bite into them. I sold David Beckham’s whisky by creating a fragrance that smelled just like it tasted.

I created sounds to enhance the taste of sashimi, as part of Heston Blumenthal’s famous multi-sensory dish Sounds of the Sea, which was served with headphones coming from a conch shell that played a recording of the ocean.

I even helped enhance the soft furnishing departments of John Lewis, by introducing nostalgic aromas and lowering the lighting to encourage shoppers to feel inspired.

Now I’m ready to share the secrets of my trade with you, so you can use them to improve every aspect of your life — starting in the bedroom. Having sex may well be the most multi-sensory thing we ever do.

From attraction to flirtation to intimacy itself, the art of getting it on engages every sense both consciously and at a primal, instinctive level. And while our tastes are idiosyncratic, I’ve learned there are certain sounds and aromas, colours and shapes that have the same physiological effects on us all.

Whether you’re in the lustful throes of a new relationship or in a decades-long marriage, these sensory signals can maximise fun and enjoyment at just the right moment . . .

It might not be the first sense you think of in the bedroom, but scent plays a huge part in how we appeal to our partners — and can be the sole trigger for a night of passion.

Experts now believe the act of kissing evolved because it gets our noses and tongues involved at the closest range possible, enabling us to smell and taste the compatibility of a potential mate.

We’re influenced by them at an instinctive level in our quest for genetic advantage — in theory, they’ll help us sniff out and get busy with someone who has a different immune system to ours, in order to produce children who will be less susceptible to disease.

So the first rule of great sex is: go natural. If you’re planning a romantic evening, and feel in need of a shower after a day at work, don’t apply artificial scents afterwards — keep your skin unadulterated.

If you’re clean, you don’t need any scent at all. According to research by psychologist Rachel Herz of Brown University in the U.S., we’re much more attracted to a person’s natural odour than to any artificial perfume they apply.

Smell was more important for women than for men, but way up there for both. So if you’re together, the chances are you already have an instinctual affinity for the smell of each other’s skin.

In 2016, a survey asked over 2,000 Britons about their bedroom wall colours and sexual behaviours.

The results showed that people who have caramel-coloured walls have sex most often, averaging around three and a half times a week (the UK national average is around twice a week).

The researchers believe that’s because of a learned association between the colour and the pleasure of eating caramel and chocolate, and the link between chocolate and sex.

Can’t afford to redecorate? A nice amber glow in the room, created using coloured lightbulbs or just an amber lampshade, is the nearest lighting can get to a sumptuous caramel — and it also links sensorially to the warm scents of vanilla and nutmeg, with each element enhancing the other and creating an enveloping sensual atmosphere.

Human beings on the whole prefer the appearance of curved, fluid lines rather than straight and angular shapes.

In 1947, Cambridge psychologist Robert H. Thouless suggested that because curves are fundamental to the human body, sexual desires are at the root of our aesthetic appreciation of them.

In the world of product design and packaging, this is taken very seriously — because it works.

You’ll notice that the more pleasurable the product, the more fluid shapes are used in graphics, fonts, logos and packaging.

When you decorate and furnish your bedroom, look for rounded contours in 3D shapes. Choose patterns on bed throws and rugs with curved and fluid designs to create a pleasingly decadent environment.

One somewhat startling U.S. study appeared to prove that the smell of pumpkin pie improved a man’s erection by 40 per cent!

Many of the other successfully arousing aromas were also food-related — doughnuts, for example, or liquorice — and one reason for that might be evolutionary.

It was after our ancestors came back from hunting that they were more likely to get lucky. Maybe for British men, you should light a candle scented with familiar treats such as rhubarb crumble or strawberries and cream.

What we should take from these results is that men respond physiologically and emotionally to enticing aromas. The key qualities of these baked desserts are warmth, spice and sweetness.

Cinnamon, nutmeg, vanilla and anise are key ingredients in the top three scents in the study. Lighting a sweet-scented candle creates a feeling of warmth, and the scent of these food-related ingredients will help things get under way.

No surprises here, but red really is a powerful seductive tool. In mating rituals throughout nature, many species perform some kind of display that involves red, perhaps revealing the colour on their plumage and ruffling it in the direction of a potential mate. Humans are no different, and researchers suggest that red is an in-built instigator of what they call ‘reproduction-relevant behaviour’.

A study in New York showed that during flirty conversation, men asked women more intimate questions and sat closer to them if the women wore a red shirt than if they wore green or blue. Another study showed women judged men in photos to be more attractive both when the men were wearing red and when standing against a red background. This innate connection may partly explain the attraction of red lipstick. The use of red across the ages to symbolise sex, lust and passion stems from this primal trigger.

Research shows men make more effort to play music they think their partner will want in the bedroom, while women are more likely to play their own favourite music. If you want some ideas, Professor Daniel Müllensiefen, a music psychologist at Goldsmiths University in London, ran a survey of 2,000 men and women in 2012, asking for their top musical choices before and during sex. Unimaginatively, the favourite choice for men was Let’s Get it On by Marvin Gaye, while the top choice for women was the soundtrack to the film Dirty Dancing.

The consistent qualities of the tracks that get people in the mood were ‘relaxed’, ‘tender’, ‘peaceful’, ‘happy’ and ‘low-key’.

Another study suggested that music with intertwining melodies — such as Ravel’s Bolero — encourages closeness in the throes of passion, as lovers get caught up in the music and feel it represents themselves intertwined together.

There are other qualities of music that can add to the physical act of love, as well as heightening it emotionally.

An effect sometimes referred to as ‘skin orgasms’ has been shown to be induced by musical passages that ‘violate our expectations’.

One study showed that around 80 per cent of subjects experienced shivers down the spine when listening to music that contained sudden changes in harmony, unexpected moments, or places where there’s an unusual discordance between two elements.

Almost 40 per cent of the people in the study connected the sensation to sexual arousal.

Pieces of music that have been shown to generate skin orgasms include Rachmaninov’s Piano Concerto No.2 and Someone Like You by Adele.

Make a playlist of music that causes this sensation and put it on in the background, making your skin more sensitive while you focus on the intimacy of the moment.

If you’re in a new relationship, your feelings towards each other will be spurred on by eating something sweet.

Scientists at Purdue University in Indiana showed that people who ate or drank something sugary rated potential partners as more attractive and were more interested in starting a long-term relationship with them.

In an average relationship, men are the main touchers in the first year, after which women take over the role.

But the amount we touch tends to drop off as time goes by.

Learning how to touch each other again is one of the best ways to reconnect.

The feel of skin is the most sexually stimulating texture on a physiological and emotional level; gently caressing each other releases oxytocin, ‘the love hormone’, which has a role in how many orgasms we have and how much we enjoy them, and in helping to forge romantic bonds.

She recommends spending time stroking each other’s arms and back, getting comfortable with being both a giver and receiver of touch, in order to forge deeper levels of connection.

She suggests a multi-textural exercise for couples that can help you explore the textures and sensations you most enjoy. She suggests collecting up to ten different objects of varying materials, textures and temperatures, for instance: a fur mitt, a piece of satin ribbon, an ice cube, an emery board, a soft artist’s paintbrush and a toothbrush.

Lie down and close your eyes, letting your partner (or yourself) stroke the side of your body and noting what you like or dislike, and the sensations that you’re feeling.

SENSE: Unlock Your Senses and Improve Your Life by Russell Jones is published by Welbeck on 20 August, hardback £12.99.

Sexting should be multisensory