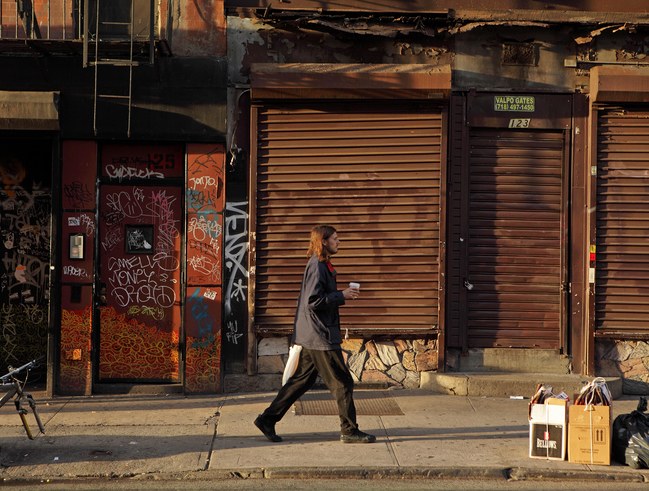 The Graphic Designer Who Maps the World’s Cities by Smell

Smell has long been dismissed as the second-class citizen of our senses—the “most ungrateful” and “most dispensable,” according to Immanuel Kant, who, echoing Plato and Aristotle, praised vision as our “noblest” sense. But, on a recent Sunday, I spent the afternoon placing full faith in my nose, sticking it into garbage cans, restaurant exhaust vents, and within sniffing distance of my fellow-pedestrians on a stretch of the Lower East Side deemed New York’s smelliest block. The excursion started uneventfully, when I detected familiar fumes of gasoline on Delancey Street, but turning onto Eldridge toward Broome I confronted a pungent, intriguing miasma of garlic, cigarette smoke, rotten melon, roasted meat, and plastic. I trailed this scent to further whiffs of steamed dough and menthol outside a massage parlor, then got distracted by a cloud of incense and darted after it in pursuit—directly into the path of an oncoming biker, whom I admittedly hadn’t smelled coming.

This ignoble pastime, known as a “smellwalk” in academic circles, was guided by a kit I downloaded from the Web site of Kate McLean, a designer and researcher at England’s Canterbury Christ Church University. McLean has worked with hundreds of volunteers to identify the odors of cities from Edinburgh to Singapore, and then to map the unique olfactory landscapes, or “smellscapes,” of those locales. (This work is also the focus of McLean’s doctoral dissertation at London’s Royal College of Art.) McLean, known as Smelly Kate to her friends, aims to render visible and permanent sensory information that is invisible and fleeting—and thus regularly ignored, both by individual people and by government agencies, which tend to become interested in olfactory matters only when worrisome stenches arise. (In 1910, as part of an audit of New York’s sanitation system, several luckless city employees were tasked with mapping sewer odors.) McLean says that her smellwalkers frequently begin “almost frightened of smell,” but often end up impressed by what their noses find. “What I’d like to do is . . . make people aware of the fact that there is a smellscape out there,” she told me recently by phone from her office in Broadstairs, a coastal town east of London that, according to one smellmap of the area, smells of printing inks and oranges. “It’s a part of our lives, it has a relevance to us, and quite often it’s much more pleasant than we think.”

On my tour of the Lower East Side, I followed McLean’s pointers, delivered over the phone, to alternate between “smell catching” (passively receiving odors) and “smell hunting” (actively stalking less obvious scents), while being sure to flare my nostrils with each inhale. “Remember that breathing isn’t sniffing,” McLean told me. “If you find a dog, stick your nose into its fur, don’t just sort of sniff around it.” The kit instructed me to log the name of each odor, along with its intensity, duration, pleasantness, expectedness, and any associations it inspired. Outside a bodega on Grand Street, I sniffed a rack of pajama pants whose scent reminded me of musty library books, and I stuck my nose into the back of a garbage truck that emanated a surprisingly sweet perfume of hairspray with a hint of blue cheese.

McLean grew up in a village in East Sussex, the daughter of a legal secretary and an X-ray engineer and salesman who loved to travel and made their own homemade wine. She began her smellscaping in 2009, while working toward an M.F.A. in graphic design at the Edinburgh College of Art. There, she undertook a project to translate the tastes, textures, sights, and fragrances of Edinburgh, Scotland, into individual maps; after finding that smell was “by far the most difficult” to document, she told me, she got “hooked.”  “We can reëxplore somewhere that we think we know—and understand it in a completely new way—by considering it nose-first,” she said. McLean’s research has turned up wonderfully specific aromas (in Greenwich Village, “intense leather and rubber from the fetish shop”) and showcased the plethora of distinct smell environments that exist within a single city. Even in the notoriously sanitized Singapore, where the battle against stench extends to banning the pungent durian fruit from public transit, the olfactory ecosystems range from Sentosa island’s mild scent of “jasmine” and “salty air” to Little India’s vibrant bouquet of “unpolished wood,” “curry,” and “shisha.”

Beyond enhancing the joy of sniffing in the moment, McLean says, mapping smellscapes also provides a record of how odors change as cities evolve. Today’s New Yorkers may forget that their metropolis was once, according to the environmental historian Melanie Kiechle, an “olfactory terror,” home to a hundred and fifty thousand horses generating three million pounds of manure per day, and to oil refineries, slaughterhouses, fat renderers, and phosphate manufacturers belching fumes in parts of Brooklyn now more likely to feature the pleasant aromas of gourmet coffee and designer candles. (McLean’s smellmap of today’s Williamsburg turned up a multitude of bougie scents such as spearmint and wheatgrass—plus a whiff of urine to remind people of the borough’s grungier past.)

As Kiechle explains in her forthcoming book, “Smell Detectives,”  the smells of New York City not only reflect urban changes but actively drive change, too. During the eighteen-fifties, for instance, when disease was thought to travel through foul odors, activists successfully rallied the city to help deodorize the air by reserving more than seven hundred and fifty acres of Manhattan for the creation of Central Park. And it was a legislative war on smell—including an 1868 ban on slaughterhouses below Fortieth Street—that drove industrial manufacturers from Manhattan into the less strictly regulated boroughs of Queens and Brooklyn, which today still houses the city’s largest sewage-treatment plant. (Through the nineteenth century, similar concerns led to major infrastructure projects in Chicago, Boston, and London.) Even today, New York City is spending hundreds of millions of dollars to build four new garbage-transfer stations—including the first on the island of Manhattan, on the Upper East Side. The undertaking is motivated, in part, by a push for stench equality—to redistribute the olfactory burden of disposing of trash more fairly among the five boroughs….