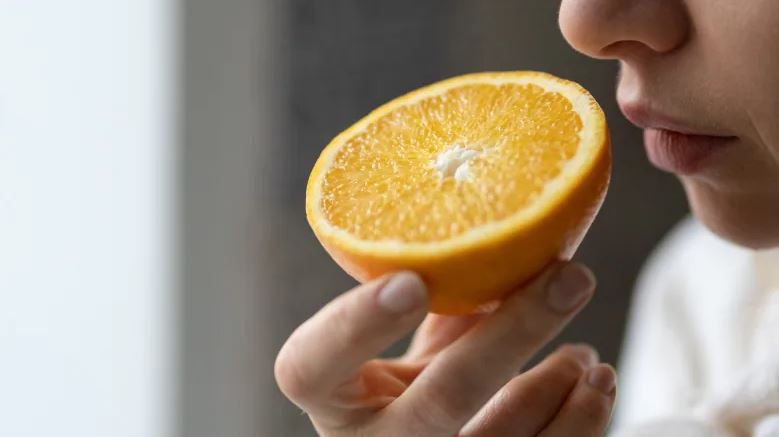 From smell kits to a nose implant, how researchers are trying to help anosmics regain their sense of smell | CBC Radio

Everything seemed normal when Kerri Wall returned from a mountain biking trip in May 2018 — until she smelled her sweaty shirt.

“I thought, oh, it’s fine. I can wear it again tomorrow,” she told The Current‘s Matt Galloway.

Wall, who lives in Fernie, B.C., expected her sense of smell to return sooner or later, given that she was “generally a super healthy person.” But four and a half years after losing her sense of smell, it hasn’t returned.

“I could no longer smell or taste any of my own body smells,” she said. “Like, I no longer kind of felt like a mammal in that way.”

She described it as “a very alien feeling.”

Wall is among a number of Canadians who are anosmic: people who have lost their sense of smell, either partially or completely.

It’s one of the side-effects of contracting COVID-19, but some people, like Wall, actually lost their sense of smell well before the pandemic.

Still, scientific interest in COVID-19 has boosted research for anosmia, and a variety of solutions are becoming more mainstream.

“I think that COVID is making a lot of us feel hopeful, that people are paying attention and doing more research,” Wall said.

“I don’t really have much hope that anything will change in my lifetime, but I would love it if other people didn’t have to live with this.”

Trying to gain a better understanding

It’s not always clear what causes anosmia. In Wall’s case, she said she saw a nose and ear specialist, and had CT scans and MRIs to find out what caused her loss of smell.

“All the scans and all the examinations came back … quote-unquote normal, and so they just said, ‘OK, well, you’re good,'” she said. “I did not feel good, but they could not identify any medical issues.”

He said patients can be broadly broken down into three categories: post-traumatic, which means they’ve experienced head trauma and lost their sense of smell afterwards; post-viral, which is caused by a virus; and idiopathic, where the cause is unknown.

“Kerri’s … maybe post-viral, but more likely idiopathic, because she didn’t have a clear viral program before she had her loss of smell,” Sowerby told Galloway.

Sowerby said COVID-19 has garnered more attention for olfactory dysfunction. This has led to the emergence of groups like the Global Consortium for Chemosensory Research, which conducts scientific studies to assess the possible relationships between respiratory illnesses like COVID-19 and the common cold, and their effects on smell.

“There’s about 700 researchers around the world that are part of this group that’s really becoming an international collaborative effort to try and improve our treatment therapies,” he said.

Although there are no concrete, all-in-one solutions, Sowerby said research has found some potential recovery methods for smell loss, such as olfactory training, also called smell training.

I try to remember, what does lemon smell like? What does lemon taste like? And I inhale it and, you know, you try to get a smell.— Kerri Wall

This is one of the methods Wall tried. Her smell training kit came with essential oils that smelled like lavender, spearmint, clove and cedar, but she was also recommended to smell lemons.

“You practise trying to visualize [the smell],” she said. “I try to remember, what does lemon smell like? What does lemon taste like? And I inhale it and, you know, you try to get a smell.”

“People do say it sometimes can help,” she said. “So I do kind of persist, although I don’t think anything’s going to change.”

Nose implants in the future?

Richard Costanzo, a physiologist at Virginia Commonwealth University, understands Wall’s frustration. As co-founder of the Smell and Taste Disorders Centre, he’s heard anosmic patients like Wall struggle to find a solution for years.

That’s why he and his team are working on a bionic nose implant for people with anosmia to use.

It’s “not a new idea,” Costanzo told Galloway. “We’ve been doing this for years for people who lose their hearing: cochlear implants, which is a device [that] stimulates the ear and produces sound.”

For about a decade, Costanzo and his team have developed prototypes of their bionic nose implant in their lab. He said the latest prototype consist of three components.

“There’s a sensor system that picks up odours and then encodes them into computer language. They call them odour fingerprints,” he said. “Then the computer stimulates different parts of the brain to generate perceptions of smell, whether they’re good perceptions or bad perceptions — and ends on the brain stimulation.”

Eventually, I do believe that we will be able to encode odours … and then match it up to the patterns that we need to stimulate in the brain to produce useful perceptions.— Richard Costanzo

These prototypes aren’t available for public use — the technology has a way to go before that. But Costanzo said he envisions the first version of these bionic noses to be wearable on a set of glasses.

“You could have a small sensing probe that is attached to a small microcomputer on the side of the glasses,” he said. “Just like a cochlear implant, the computer information would then be transferred into the brain through radio waves.”

In this way, “we would target specific parts of the brain to generate the perception of that odour.”

Costanzo is aware that it’s easier said than done.

He makes it clear that the prototype is not at a point where a bionic nose can help people with anosmia smell again. For now, the researchers are still trying to figure out with certainty where odour perceptions are generated in the brain.

If cochlear implants are anything to go by, the first publicly available bionic noses might not be the most technologically advanced implants.

“The first cochlear implants implants just created a buzz, a sound alert that there was something out there in the environment,” Costanzo said.

“So it’s possible that our early [bionic nose] prototypes will just simply alert you to dangers or something important, with respect to the sense of smell or your environment.”

“Eventually, I do believe that we will be able to encode odours … and then match it up to the patterns that we need to stimulate in the brain to produce useful perceptions.”

Source: From smell kits to a nose implant, how researchers are trying to help anosmics regain their sense of smell | CBC Radio