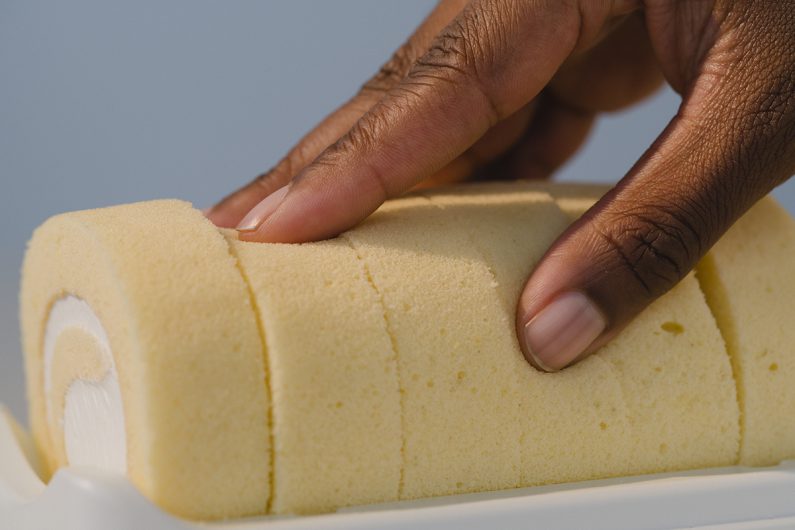 Flavor in Your Ear: Learnings from the World of Food ASMR | MOLD :: Designing the Future of Food

By msensory team16/07/2019July 17th, 2019No Comments
All photography by Caroline Tompkins for MOLD Magazine.
This story is part of MOLD Magazine: Issue 04, Designing for the Senses. Pre-Order your limited edition issue here.

If you’ve spent any time on YouTube recently you’ve likely heard of ASMR, otherwise known as the whispering videos said to trigger a curious, head-tingling relaxation response in certain people. Standing for autonomous sensory meridian response, the term was coined in 2010 by a woman named Jennifer Allen, who, intrigued for over a decade by a euphoric shivering sensation she experienced when exposed to certain sounds, decided to sit down and give it a name. At the time, Allen worked as a manager for a cybersecurity company in upstate New York.

Seeking to provide others with a place to talk about similar experiences without fear of ridicule, Allen turned to Facebook to found an ASMR Group in 2010 and Page in 2011, the latter going on to become the largest ASMR Facebook community with 59,000 members and counting. While forums on the subject had existed prior to Allen’s Facebook groups, the Facebook activity allowed even more people who had experienced ASMR to commune and share their stories at a time when little formal research had been done on the subject. 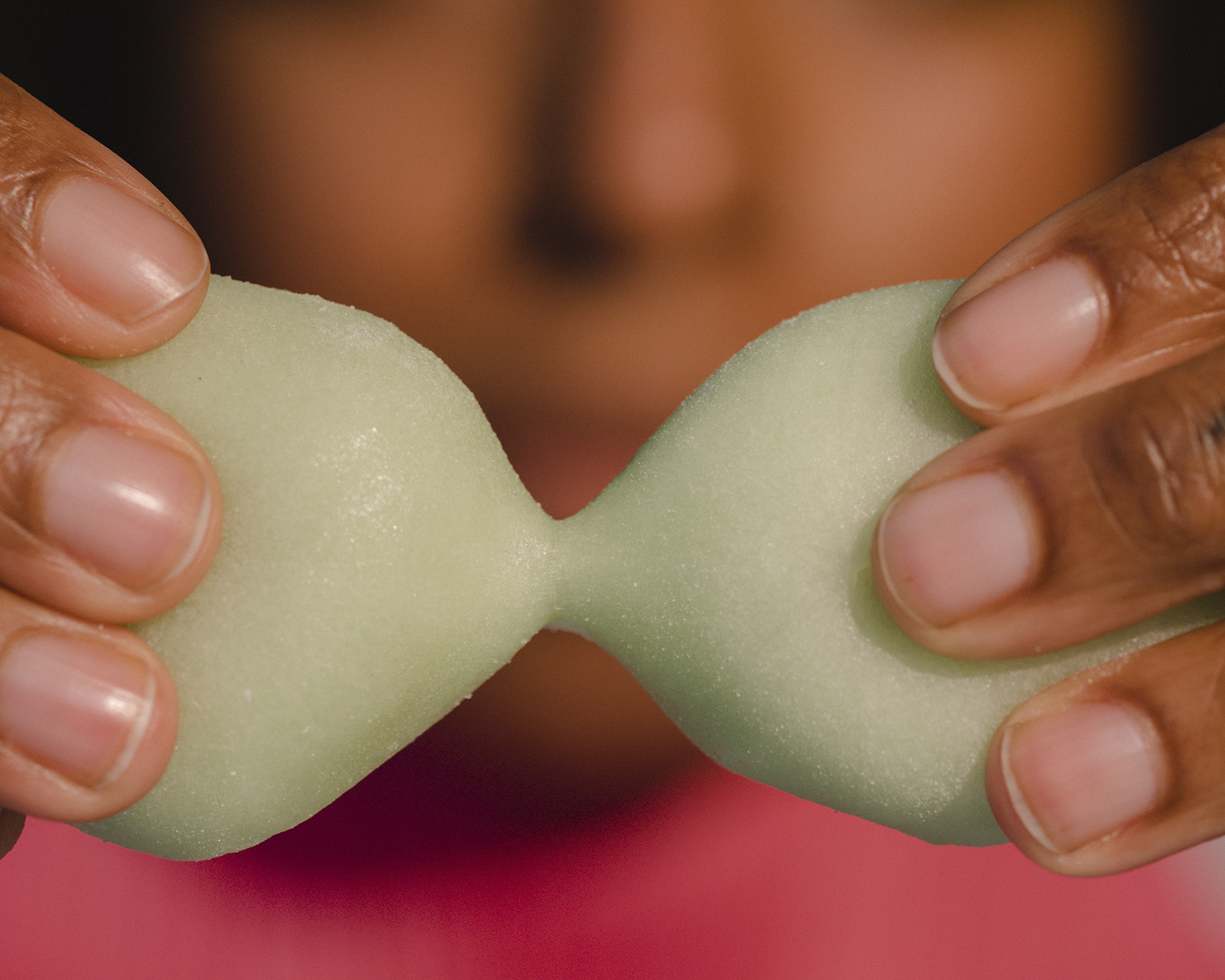 It wasn’t long until scientists began taking more serious note of the phenomenon. Numerous ASMR studies have been published since the term’s coining, including a 2016 study in the International Journal of School & Educational Psychology suggesting ASMR may help with sleep and relaxation. And another from the University of Sheffield in 2018, which found ASMR may benefit both mental and physical health. But while the influx of new research may sound promising, responses vary from person to person, and scientific data has yet to explain exactly why some find the videos relaxing but others don’t. As such, many agree that more studies are needed to understand the phenomenon.

But one thing remains certain. For those who do experience ASMR, almost anything can trigger it—from vague hushed tones and scratching noises to the more specific tasks of ear cleaning, painting, hair brushing and munching on crunchy foods.

The reasoning is why data from Swansea University found that most people have their first ASMR experiences via real life interactions. These can include light touches or hearing certain soundscapes. It also explains why online discussion about the experience is documented to have begun in 2007—years before Allen first coined the acronym—when users of an online health forum posted a thread looking for others with similar sensory sound experiences.

The unnamed phenomenon also began gaining traction on YouTube around this time, with the YouTube user massageclips2, who first began publishing videos in 2007 and is credited as being among the first to appeal to an ASMR-inclined audience. The painter Bob Ross was similarly canonized in the ASMR community when his soothing paint tutorial videos, uploaded onto his channel in 2011, were found to trigger ASMR responses.

These early videos kicked off a massive digital snowball effect. Today there are countless ASMR channels to choose from, and many of YouTube’s top ASMR hosts average hundreds of thousands of subscribers. The category has become so popular that Google has found that more people search for “ASMR” on YouTube than they search for “candy” or “chocolate.” The videos includes niche subjects that cater to everyone—from those interested in hearing microphone scratching noises to others more inclined to the sounds of shaving cream escaping its canister (a surprisingly mesmerizing effect).

Discovering I experience the bone-chilling sensation earlier last year, I first began watching ASMR to help with relaxation and falling asleep while travelling. My problem presented itself shortly thereafter: for every calming whisper video on YouTube, there were several others that featured a smorgasbord of squishy and crunchy noise-making snacks. I quickly discovered that watching someone wordlessly work their way through a plate of candied strawberries can be as relaxing as listening to rain fall (another popular ASMR trigger). But food ASMR videos are also impossible to watch without getting hungry. One evening, on the verge of calling room service at one in the morning after watching a video highlighting the sizzling crunch of fried chicken, I realized I should avoid the category altogether before bed. And yet, there’s a reason why food ASMR is among ASMR’s most popular genres, with some videos garnering up to tens of millions of views. 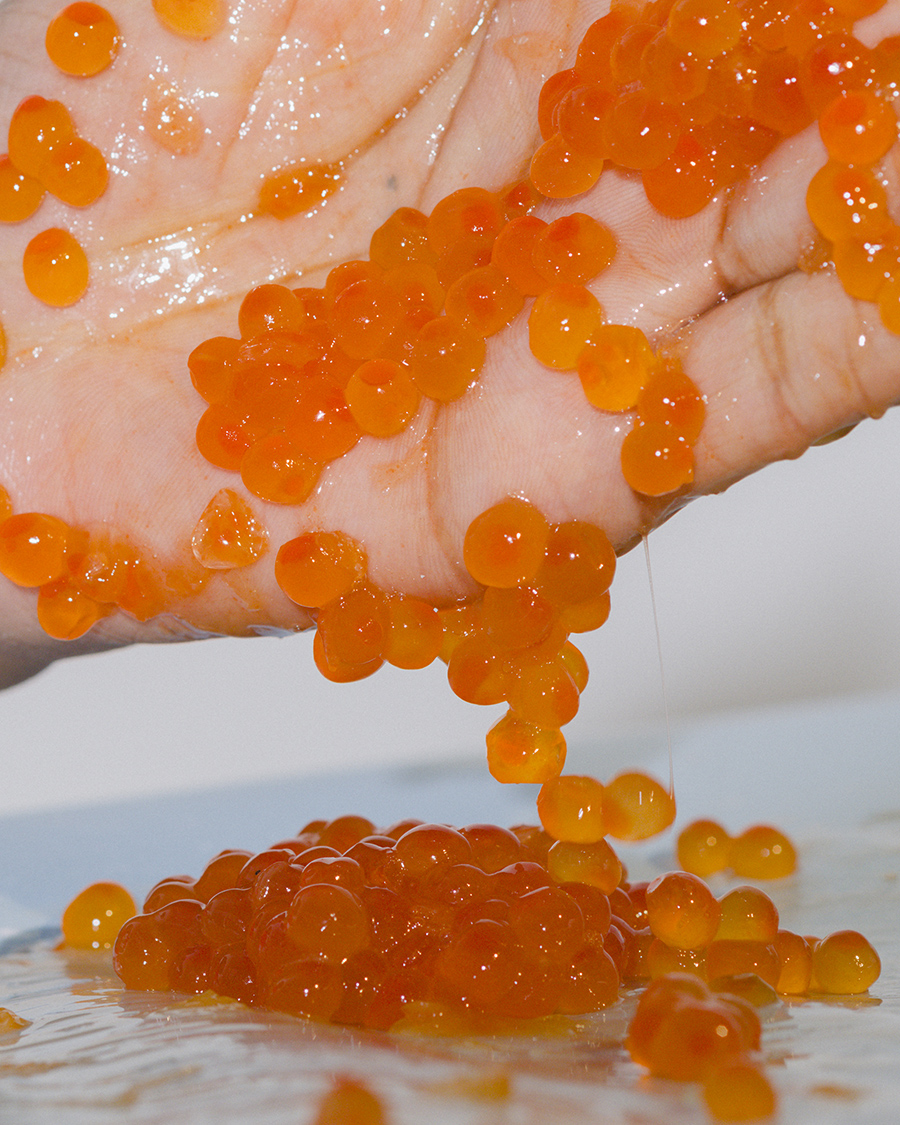 In a food media landscape saturated with fast-paced culinary competitions and quick, time-saving recipes, food ASMR offers a deliciously relaxed approach. Its slow pacing and amplified noises hone in on the unique subtleties of various ingredients—from the deliberate juicy crunch of said candied strawberries to the satisfying crackle of sea grapes. The cumulative effect is one worth coming back to, creating a newfound appreciation for certain foods.

There’s also the matter of sound appreciation. In North America, where the concept of ASMR first originated, food ASMR breaks nearly every rule in gastronomy. From childhood, many of us are taught that eating noises are entrenched in shame. Who can forget sitting at the dinner table and being told to sip and not slurp one’s soup, or to keep your mouth closed while chewing? Meanwhile food ASMRists make a show of chewing loudly into microphones in order to catch every lip-smacking, tooth-gnawing eating sound. Videos also tend to give preference to ingredients that create the best noises, encouraging strange and intriguing food combinations like sea grapes, aloe vera and raw honeycomb eaten in succession.

The result is a captivating and unusual foray into the world of flavor. And while the field remains relatively new, researchers are already discovering how certain ASMR triggers can improve gastronomy as a whole.

Dr. Charles Spence has spent the last decade at the forefront of this research as head of the Crossmodal Research Laboratory at the University of Oxford’s experimental psychology department. In a 2017 study published in the International Journal of Gastronomy and Food Science, Spence found that making deliberate noises like slurping while eating noodles can increase the perceived flavor of a dish, suggesting that noise can lead to increased flavor without altering the seasoning of a dish.

The findings correspond to another study published by Spence in the journal Attention, Perception & Psychophysics in 2010, which found that music with sweet or bitter connotations changed the perceived flavor of toffee; with sweeter sounding flutes and wind chimes making the toffee taste sweeter, and bass-heavy sounds increasing its bitter qualities in a process coined “sonic seasoning.” 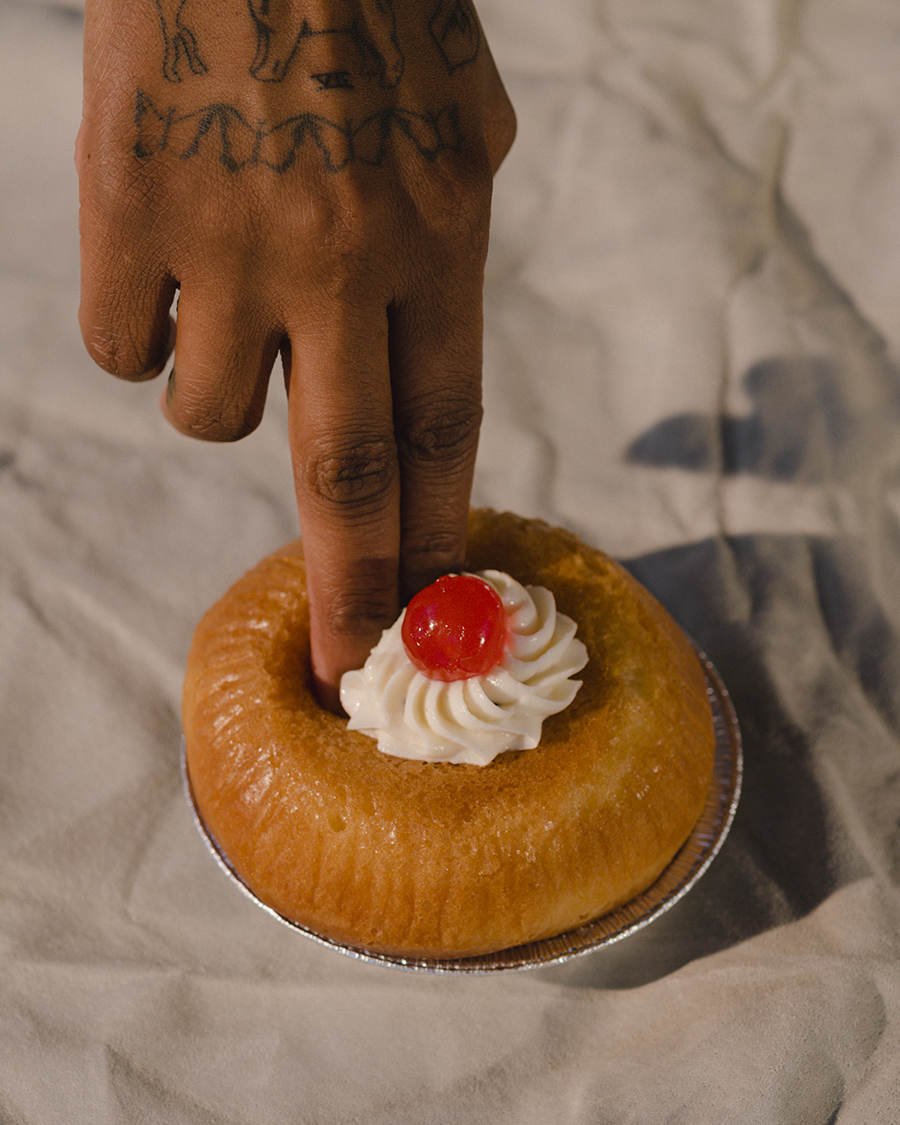 “If you go back in literature you will find extraordinary responses to sounds were being reported by academics and scientists 30-40 years ago,” Spence tells me. “Today we’re finally beginning to apply the findings to real life with companies selling foods and branded products with soundtracks or sensory apps that highlight or enhance your food in the home. In the future we’re going to see even more of that.”

Krug Champagne is one such sound-taste pairing pioneer. The champagne house hired Dr. Spence and neuroscientist Janice Qian Wang in 2015 to develop soundscapes that enhance the taste of Krug cuvées via sweet, bitter and sour notes. Spence and Wang worked with a team of composers and musicians to create the featured soundscapes, finding that consumers rated Krug wines 15% more enjoyable when they were tasted with its corresponding curated matching music. Today the project continues with music from Keziah Jones, Darren Criss and Lianne La Havas, all of which can be accessed via a six-digit code on the back of each bottle, known as the Krug ID.

Others like British Airways have also found ways to incorporate the findings. The airline created a unique “Sound Bite” soundtrack meant to improve meals served at 35,000 ft., where the ability to taste can be impaired by up to 30%. The Sound of Chocolate project, launched in Brussels in 2016, followed suit with a government funded initiative that saw scientists collaborate with artisanal chocolate makers Leonidas and Frederic Blondeel, plus renowned musicians Marie Daulne and Baïkonour, to create soundtracks that manipulated and improved the sweetness and bitterness of Belgium chocolate.

“Sonic seasoning enhances the tasting experience or changes it in some interesting or dramatic way,” says Spence. “Then, with ASMR, you can achieve an extraordinary, back-of-neck shivering response that you can never get just from eating food alone.”

Combining the two fields, ASMR noises can also be used as sonic seasoning, even for those who don’t experience the neck-shivering response. The crunching sound of potato chips, for example, is a popular ASMR sound thanks to its ability to jumpstart that signature bone chilling response. But studies have also found crunching chip sounds are correlated to freshness, meaning chip companies could increase the perceived freshness of their products by sonically seasoning their potato chips with ASMR-like crunching sounds.

Certain brands have already begun getting in on the action, with KFC releasing an ad that featured George Hamilton, aka “The Extra Crispy Colonel,” mirroring the proceedings of a standard ASMR YouTube video. In the off-kilter ad, Hamilton speaks in hushed tones while running his fingers along a silk pocket square and unapologetically crunching on fried chicken.

It makes sense that food ASMR has already begun captivating viewers and food companies alike. Sound communicates information, emotion and pleasure. But it is notorious for being overlooked, ignored and even shamed by the vast majority of the culinary world. Consider your average restaurant experience where it’s considered a compliment not to notice too much about the noise level or music. Instead of devoting time to curating a musical selection that might enhance the dining experience, too many eateries continue to serve their meals alongside sub-par sounds generated from an algorithmic Spotify playlist. Such was the case at New York’s Kajitsu until regular patron and renowned composer Ryuichi Sakamoto offered to overhaul the restaurant’s musical selections free of charge simply so he could better enjoy his meals there.

By emphasizing the role sound plays in the eating experience, food ASMR offers a refreshing departure from your typical meal. The videos may not be for everyone. In fact, last June China’s anti-pornography office banned all ASMR videos in order to protect minors from what it called “harmful content.” But as others wait to discover more about the potential benefits of ASMR, we’re reminded of the possibilities of tasting with our ears.

Source: Flavor in Your Ear: Learnings from the World of Food ASMR : MOLD :: Designing the Future of Food