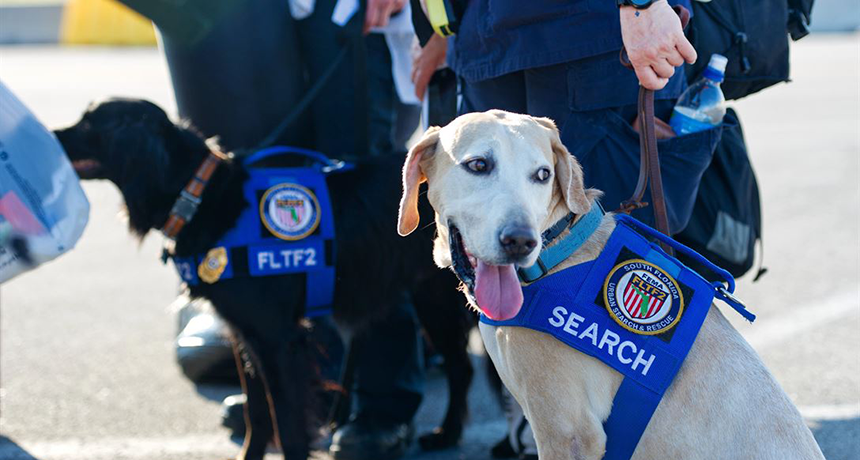 Dogs are some of our best friends. That’s especially true after a disaster, such as an earthquake. When buildings collapse, search-and-rescue dogs help find people trapped beneath the rubble. Dogs’ amazing noses can pick up the scent of survivors. Now scientists have developed an electronic tool that does the same thing. It’s taking scent detection to a whole new level — or, should we say, to extremely low levels. 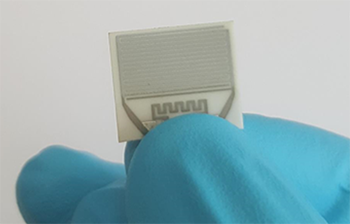 Sensors in the new device are made of a material that detects a certain chemical. When that target chemical contacts the sensor, a reaction occurs. This creates an electrical signal.
S. Pratsinis/Swiss Federal Institute of Technology

The new device is a sort of electronic nose. Much like the canine version, this e-nose can detect chemical signs of life. Such scents include those due to acetone (AA-sih-tohn), ammonia (Uh-MOHN-yuh), isoprene (EYE-soh-preen), water vapor and carbon dioxide. People exhale tiny amounts of these or release them from their skin.

Researchers in Europe developed a device that can detect extremely low levels of these compounds. The tool includes three sensors the group designed, and two more that they bought. When certain chemicals touch materials on the sensors, a reaction occurs. This reaction produces an electrical signal. When occurring together, even tiny amounts of these compounds could point to some survivor below the rubble.

The research team described its findings March 30 in the journal Analytical Chemistry.

This isn’t the first time engineers have developed such a device. Earlier models, however, have been bulky and expensive. They could not detect low levels of target compounds either.

The new sensors are inexpensive and small enough to fit inside a handheld device. A drone might even fly them over a disaster site.

The device can detect incredibly faint traces of more than one compound at the same time. “Being able to do this, in such a small device, is the critical discovery,” says Sotiris Pratsinis. He’s a chemical engineer with the Swiss Federal Institute of Technology in Zurich. Pratsinis helped create the gadget.

His team tested it in chambers with people inside. Those chambers were like the small spaces in rubble where people might be trapped. Chemicals given off by the volunteers built up inside the chambers. The new device detected those compounds at incredibly low levels.

Scientists have been developing electronic noses that are capable of detecting many different odors — even those associated with disease. Watch this video to find out how they work.
Universitat Rovira i Virgili/YouTube

The results were good news for the research team. But they might not be such good news for our four-legged friends, who could soon be out of a job. “Ideally, this technology could replace search-and-rescue dogs,” Pratsinis says.

Stephen Taylor agrees that the new technology has some benefits over dogs. For example, dogs need to take breaks. And they might not always be available when disasters strike. Taylor is an electrical engineer at the University of Liverpool in England.

He suspects the new device could improve how rescuers find disaster survivors. Still, he thinks it may be too soon to retire our trusty search-and-rescue pooches. Dogs and the electronic devices could work together, he suspects: “I foresee that such a sensor could add to the fine work done by sniffer dogs.”

Taylor also pointed out some potential limitations of the chemical sensors. “E-noses are useful. But they can be prone to unstable readings and interference,” he says. Researchers will need to test e-noses outside the lab to make sure they’re reliable.

Pratsinis plans to fine-tune his device by testing it in simulated disaster zones. He also thinks that with tweaks, his team’s device could detect the characteristic gases emitted by a corpse. Then the tool could tell whether a disaster victim is still alive. Knowing that could help rescuers target their initial efforts on survivors.

Rescue dogs already can sniff out live people who are trapped. Other dogs can detect cadavers. In each case, training dogs to know these scents takes time and money. Someday, e-noses might replace the wet noses of search-and-rescue dogs. Until then, when disasters strike, such electronic devices could team up with those canines to home in on survivors.

Why do dogs have such an amazing sense of smell? Watch the video to find out.
PBS News/YouTube