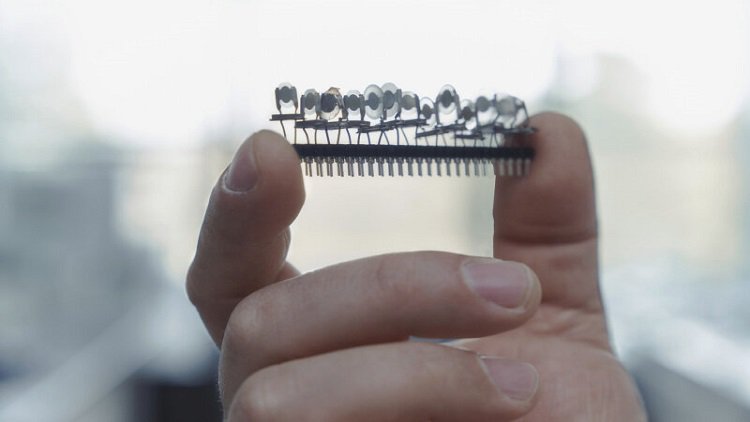 By msensory team11/08/2021No Comments
The combination of sensors and materials simulates the sense of smell. Source: Amadeus Bramsiepe, KIT

An electronic nose (E-nose) with an artificial sense of smell can recognize different mint species with high precision, making it suitable for a number of applications including pharmaceutical quality control and monitoring mint oil as an environmentally friendly bioherbicide.

Different varieties of mint produce very species-specific scents. Industrial quality control of mint oil, and others, is strictly regulated to prevent adulteration. It is a time-consuming process that requires a great deal of expertise. The new E-nose developed at Karlsruhe Institute of Technology (KIT) to support this process. was tested with six different mint species.

The E-nose development was closely guided by the biological model. Twelve quartz crystal microbalance (QCM) sensors replace the human olfactory cells that transmit information to the brain via electrical pulses. These sensors have two electrodes equipped with a quartz crystal, components widely used in mobile phones because they guarantee highly accurate mobile phone frequencies at a low cost.

“The mint scents are deposited on the surface of the sensors. This changes their resonant frequency and we get a reaction to the respective scent,” explained Professor Christof Wöll from the IFG. To enable the new sensors to absorb the different organic scent molecules, different sensor materials, including metal-organic frameworks, were used. “These materials are highly porous and particularly well suited for sensor applications because they can absorb many molecules like a sponge,” Wöll said. “By combining the sensors with the different materials, we create what might be called a neural network.”

The device was tested with classic peppermint, horsemint, catnip and three other species. “We use different machine learning methods to train the sensors so that they can create the fingerprint of the respective scent from the collected data and thus distinguish the scents,” Wöll said. The E-nose is flushed with carbon dioxide for about half an hour to allow the sensors to regenerate after each scent sample.

The E-nose with QCM sensors was demonstrated to assign mint scents to a particular species with great specificity. Compared to conventional methods such as mass spectrometry, this technology is a user-friendly, reliable and cost-effective alternative.

The research is published in Chemosensors.